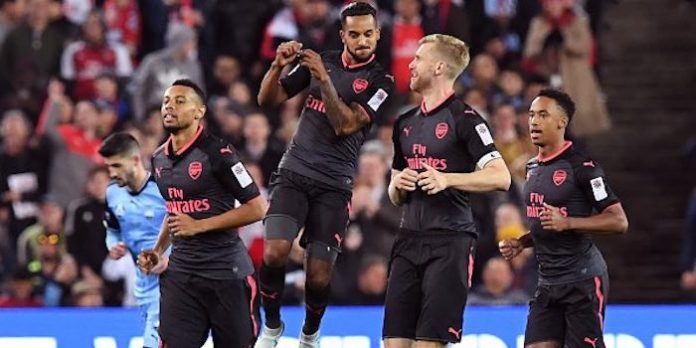 Arsenal played Sydney FC in their first pre-season game of the season and won 2-0 thanks to goals from Per Mertesacker and Alexandre Lacazette while Danny Welbeck missed a penalty.

Giroud played a huge part in the second goal with his movement attracting defenders and opening up the center for Lacazette to explore. These are the qualities he brings that goes unnoticed atimes. Though he hesitated to join in the celebration, I don’t know why and what that means.

Sad isn’t it? Perhaps he’s wondering why he didn’t get the pass. A goal for him would have made his stock rise, instead he sees his replacement score.

I don’t know how Wenger can play them together with the transfer politics going on.

????
My favourite website right here. But the headline “report” is a little off

That was my first reaction too. That’s gonna sting a bit. But Giroud made the space with the run drifting back post, Laca knew to take it. We want you to stay Oli, you will get goals and playing time!

The Arsenal need a big squad for matches in Siberia and Khazahkstan on Thursday nights. Giroud to stay

Just leaving the stadium now. Really enjoyed the performances of Nelson & Bramall this evening & Bielik was solid enough. Our forwards made a by A-league standards keeper look better than he is

Hej mate. I could see the match can you (or any other fellow gooner) give a short review for the performance of our youngsters?

I could NOT see the match..

Some good highlights up on Youtube currently, just in case you have not checked them out already.

Not bad considering it was the first pre-season game. Good to stretch their legs. Some things that bothered me though

– We’re still always trying to walk the ball into the net. Try shooting from outside for once in a while.

It’s a pre-season friendly… Lighten up!

I stated already that I understand it’s a pre-season friendly. Just pointing out some things that bothered me is all.

Sorry for having an opinion.

how can this be anything but different from last season considering the team is a utter mix of youngsters and seniors?

At least someone is in mid-season form!

Today we saw the same common mistakes we saw last season. So I am hoping we work on improving these issues and do not have to see them progress into the season itself.

It does not (me at least) and I appreciate comments like this, good to know and hopefully they address these issued finally 🙂

Thing is mate, it’s difficult to see how you could be called a supporter rather that a critic!

For me, you don’t give a shit about the team, only your opinion of how shit we are.

Everyone is entitled to an opinion however there is one rule here, ‘to be respected you have to support Arsenal’

So move off elsewhere, I had enough of your lot ruining my enjoyment last season!

Oh, so I’m not a supporter because I choose to point out the problems I see with the team? What the actual hell are you on about? Are you telling me every analysis on this very website is bullshit because it’s a criticism of the game. Being negative about the team is one thing, but pointing out flaws of the team that you wish them to improve on is another. If people would have bothered to actually read my comment, they would see that I actually said that I UNDERSTAND it is pre-season and it’s good that we are finally… Read more »

The thought and anticipation of seeing Özil and Lacazette playing together makes me feel all warm and fuzzy inside.

It’s bloody great to have The Arsenal back.

So where’s the report?

Nelson looked terrific, so did almost every single one of our youngster, well maybe except Maitland Niles. Walcott, Welbeck and Elneny didn’t show me any promising signs, and I honestly think we ought to me more decisive in moving on a slew of players who aren’t simply good enough. P.S. Did anyone else felt a bit sad when the commentator mentioned we signed Szcz instead of their Keeper who apparently was all set to be selected, till Szcz showed up. Invested so much time on him, and now that he has matured into a really really really good player, we… Read more »

Waiting for by the numbers on this one! #indepth

Walcott is a joke! Sell him while you still can Arsene and invest in something better (mahrez, lemar etc.)
We should light out his 19 goals in all competitions lasz year and sell the s**t out of him

too bad for you Walcott is going no where. He will still be among our highest goal scorer this season if he his injury-free. I love those effort him and welbec put in trying to score. IT IS CALLED CONFIDENCE. After the rustiness, those effort will materialize in goals

Nope. He wont. He is useless in this system. Even if do play 4-2-3-1 I prefer ox over him all day long.
Didnt said a thing about welbz though

What a finish from Das Ent!!

To The Manor Born!

What was with the short run up for welbz’s penalty? Did he learn nothing from mesut!?

Honestly, I think he saw that it wasn’t even close to a handball on the big screen and decided to give the keeper an easy one. At least that’s what I’ll tell myself.

No mate, he wants to score, if he wants to not score, he could shoot slowly to the sideline like other players.

… quite comforting for the future!

I just loved Nelson’s calmness in the first half, the boy is good. he needs more game time, he will develop well at Arsenal. He was too calm for his age and also i give credit to the Willock too he was good today.

Willock was really good.. got out of tight corners well and still passed accurately.. Our new Santi?!

i’ve come to possess a begrudging respect for puma’s knack of coming up with absolutely shithouse, non-traditional kit designs. keep it up, lads.

The third kit is really terrible, I don’t know what people see in it. Fresh look is fine and all but how in the flaming hell do black and pink ever go together?

Am I the only one who thinks it’s badass?

Nope. It is everything a third kit should be.

What, ugly as sin and in colours as far removed from Arsenal as you can get? It’s a fucking abomination.

What formation did we play?

Nominally. Often looked like a 4-3-3 -> 3-2-5, depending on if we had the ball or not. Looked like Arsene is looking to tuck Ozil behind and put 2 number 9’s on the pitch at the same time. In that formation, attacking width is 100% from the wingbacks, one of whom (Nelson) was definitely playing more as a winger. Makes sense from a width perspective, but I’m very, very worried about only 2 (and a half) players holding all that space between the attack and the back 3.

That Nelson lad was a bit promising, wouldn’t mind seeing more of him on this tour.

One chance, one goal. That’s what we need from our forwards.

Willock and Nielson are pretty exceptional. Like what I see in bramall.
Its preseason and our first match and aside welbeck, all the players did well.
Hope to see more of the youngsters in the next game.
Good to have my arsenal back.

Mertesacker is running out of ways to out do himself:

First he has the unbelievable FA Cup Final
Then he decides he’ll be the head of the Academy.
Now he scores an overhead kick!

What is next on The Mert’s to do list

BFG is so big that the overhead kick wasnt even above his waist line. I love him.
But his short-giving with speed was exploited for that one super chance sydney had.
Welbz should have kicked the ball out, hot happy with his decision to shoot.

There’s a great photo of BFG and Santi celebrating on the pitch after the FA Cup win (Hull? Villa?). They seem to be the same height. Then you realize Per is on his knees.

Pleased with that second goal. If we manage to keep Giroud I see them working together well. A lot of his Lyon goals were scored in a similar way. Gomis would make the initial run into the centre to occupy defenders and then a neat run into space.

welbz cant finish to save his life. he even misses a penalty. good movement off the ball, stretches play etc, but just doesnt put away chances like a striker does, or creates enough chances like an AM does. 1st choice front 3 is Alexis, Mesut and Lacca. if ozil doesnt play, replace him with Iwobi. if alexis or lacca doesnt play, put giroud as 1st choice back up… only after that should we consider theo and welbz.

I was craving futbol Laca MothaFucka!

I only managed to stay awake for the first half, but a couple things I noticed: * The team shape in possession was more a 3-2-5. Both Bramall and Nelson moved way up the pitch, really early. This will put a lot of pressure on our CM when playing against teams that press. * Nelson did nothing defensively, which left Bielik exposed. He was very late to track back and when he did he held line with the CM’s, which effectively left the team with a back 4 for the few occasions Sydney held the ball long enough for us… Read more »