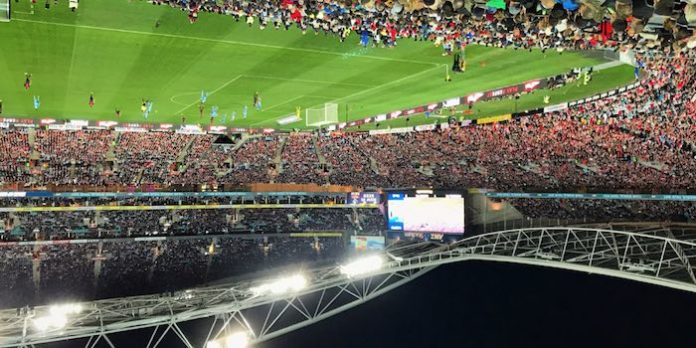 You don’t have to tell us here at Arseblog News that Arsenal has a massive following down under.

Australian Gooners are a big part of the community, and no doubt many of them were today’s 2-0 win over Sydney FC, seeing goals from Per Mertesacker and Alexandre Lacazette in the process.

The 80,000 strong crowd were in good voice, drawing praise from Arsene Wenger after the game at his post-game press conference.

“I would just say, before we start, that we’re thankful to the crowd,” he said.

“There were 80,000 fans turning up for a game like that, we are very thankful and it shows how incredible sport is in Australia and how incredible the support we have here is.

“It is absolutely fantastic for us to see that. We haven’t come here for 40 years, so at least the players realise what support we have in Australia.”

The Gunners play another game on the tour, facing Western Sydney Wanderers on Saturday before heading to China where we’ll play games against Bayern Munich and Chelsea.

Sadly the time in Australia is limited so a game against world renowned Crocodile Dundee United will have to wait until next time, although on their day off tomorrow the players will visit Aaron Ramsey Street to visit the set of Neighbours.

Down Under. I get it.

More importantly, will they have time to each get in a game of knifey-spoony?

Liverpool’s PR department should read that, if they haven’t already, then wince bigtime! As they say, class is permanent.

The Ox was warming up during the game and stopping to take selfies with kids during, so he’s won a few extra fans here I think.

Also, they subbed Cech at half time then made 10 subs at 65 min mark so hard to judge how the season plays out.

Sydney’s a great city. Hope the players see it from the water. They can take a ferry to Manly Dixon.
Coats already on, thanks for asking.

I hope you realize what huge support you (Arsenal) have globally and take this season more seriously, with not serving us the same stale dish at the end of the season… Or even something worse..

“You” not “We”
That confirms my suspicions ….

John, guess you have it for me lately. I wrote you as Wenger but mainly it’s our club, Arsenal, which can function without Wenger. What did you think I meant, smarta$$?

If you think winning the FA Cup at the end of the season and getting one over on Chelsea is “the same stale dish” then, well, entitled much?. We were in 4 competitions. We won one of them. Not happy? Poor old you.

You wrote “you” as “you (Arsenal)” just two inches up the page too, so are we supposed to take you seriously still?.

Lacs is promising? Even if it’s only a pre-season tap in? The next Henry probably but should we get excited be a sign of just a press on if we have a good player on our hands time will tell because even a tap in shows awareness.

stop with next henry thing ffs!!

I know it’s not the most important thing, and I know the decision was made by the marketing people (and maybe even contractually required), but would it not have been more appropriate for Arsenal to have worn red and white on their first visit in 40 years? Not many of those 80,000 supporters could have been holding black-and-pink scarfs, I don’t think.

Aaron
Reply to  A different George

Interesting to see how they turn out next game, the Wanderers have either a Red/black or red/white strip. I guess unveiling the pink strip in Sydney it was an opportune time to get first use.

The strip actually looks much better in person than what I first thought, it’s grown on me.

Rocky7
Reply to  A different George

Spot on. That was the first thing I said to my 10yr old daughter who’s been busting to see us live – very disappointing. There were a lot of replica 3rd kits being worn about the ground, though.

Hearsz
Reply to  A different George

I believe it was to help promote one of the two new alternate strips, which has only just been released. I was chatting with a fan before the game and he’d ordered that strip from the online shop, not knowing it would be available to purchase at the ground last night. He won’t get that strip for another week or two.

I expect that they’ll wear the traditional red & white strip on Saturday night and the Wanderers will wear their white away strip.

They did, and WSW wore pretty much the opposite. Red sleeves, and white body, black shorts and socks. They looked lovely colour-coordinated like that 🙂

This makes me feel like I’m about to fall into the ceiling. Damn your sorcery.

Heading to the airport after work to see game 2.

Amazing support last night. Great to finally be able to see the boys and its the team doing the 26 hour flight instead of me! Although it was just a friendly, big shout out to francis coquelin. He was a joy to watch last night in the midfield. Really made the difference in class stand out more than anyone.

Australasia cobber. New Zealand fans probably outnumbered aussies on a population to ticket ratio. Big ups to Gunners for coming to Australasia. Maybe they’ll make it to Kaitaia one day.

just read hart is on verge of going to west ham on loan….we should go get him…man city want 5mill loan fee,give them 6…and they want 90 per cent of his 130,000 wage paid….pay the full amount aaaand give them 140,000!really don’t get why this so difficult for wenger to see this.is he an upgrade on ospina? mos def…and we all want aspina to go…..sooooooo?hart and check as our first line of defence…that inspires great confidence in me..as opposed to check and ospina…which doesn’t…please arsene, go get joe!!

Ymca “dance cam”, Mexican waves and cheering for paper airplanes louder than goals had me pulling the last few hairs out me head. Still nearly cried to see my team for the first time in 15 years. Thanks AFC.