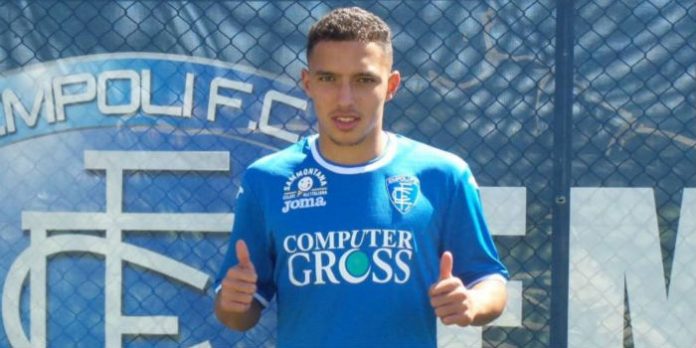 Serie B side Empoli have confirmed the permanent signing of Ismael Bennacer.

The 19-year-old Algeria international, who made one appearance for the Arsenal first team in the League Cup, has signed a four-year contract at the Stadio Libero Liberati.

Bennacer spent the second half of last season on loan at French side Tours and spoke in March about his desire to spend another season away from the Emirates.

The decision to sell the youngster on a permanent basis comes as something of a surprise given Wenger spoke warmly of him in January. That said, with so many midfielders ahead of him in the pecking order it’s not a massive bombshell.

Best of luck to Ismael. Who wouldn’t want to impress in a shirt that has “COMPUTER GROSS” emblazoned on it?

Martinelli not ruling out nationality switch

another one bites the dust

It would have bennacer if he had gone out on loan

I once had the pleasure of meeting him at a charity do once. He was surprisingly down to earth, and VERY funny. Good luck to him.

That’s a bit of a surprise. I’m assuming there’s a hefty sell on clause?

i really liked him . has a bit of grit in him that many of our academy players lacks and is a proper captain material as far as i’ve seen and his long rangers and freeckicks were a thing of beauty .would’ve loved to see how he would’ve played with arsenal if given an oppertunity . but all the best for him

Hope we inserted a buy back clause. Wish him all the best.

Looks like the club is trying to raise funds by any means possible. Never thought we’d sell him so soon.

I can think of worse places to move to. Best of luck to him.

What the foooooooook?
So doing well on loan now means being sold now?

And if it’s because we have so many CM options, then we need to do a cull.

Very surprised. If anyone follows Tours, I have a friend who does, they always score goals and concede them with ease.

Goes on to win the Ballon d’or

Huhhuhuh huh huuuuh this much is Giroud

Who’s got 2 thumbs and a dodgy mo?