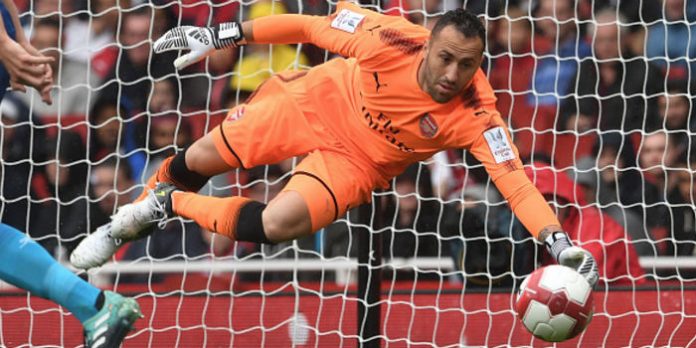 The Colombian is likely to start the season as back-up to the Czech but looks set to be guaranteed game time in the Europa League. Emiliano Martinez will be handed the responsibility between the sticks for League Cup matches.

As we reported the other day, despite a summer of speculation linking him with a move away from the Emirates, Ospina is not looking for a new challenge.

“I have a contract here [until 2020],” he’s quoted as saying by the Evening Standard.

“I’m happy and I’m going to fight to the end, I want to continue and win a job.

“That’s what I’m working for, I’ve been working for three years and now I’m waiting for the opportunity.”

It’s fair to assume that the departure of Wojciech Szczesny, who Ospina usurped as club number one back in 2015, probably made the Colombian’s decision to stick around a little easier.

He’s not everyone’s cup of tea (why do you stand so far back behind the goal line Dave?) but he’s proved to be pretty reliable when called upon over the last few seasons.

Summerlul round-up – Bielik is king of Poland, Nelson out

6 foot isn’t tall enough, someone taller can cover more of the goal.

OK back-up but would have preferred Szcz. Anyway, guess we need to move on from that.

Pantilimon must be the best keeper ever then.

Cech and Szcz will make fingertip saves Ospina can’t. They will jump above attackers and dominate their area when Ospina can’t.

Someone tall can still be a poor keeper but if we have two keepers with the same ability then the taller one wins every time.

Like Pantilimon, there will always be exceptions. I know a Tottenham supporter that is OK.

However taller is better for the same skills.

Barthez was a complete liability of a goalkeeper! A certain goal gifted to Thierry Henry comes to mind…

Yeah, except when he won the World Cup.

Can someone please tell me what’s so great about winning a World Cup?

Christophe Dugarry was obviously brilliant as well, then.

PFo
Reply to  A different George

Yes, because no mediocre player has ever won the World Cup…

Seriously do you consider him to be a better than average goalie. ?

He was a very average keeper.

Cech and Szcz , finger tip saves . Jumping above the attacker . Pf,ff . Ospina goes through them , YESSSS .

But by your logic the taller keeper wouldn’t be as good as getting down to low shots or as quick with his feet, right?

Casillas is 6ft, that really held him back being one of the world’s best keepers for over ten years…

No, but it was a disadvantage he had to overcome.

…or undercome if he was only 6 foot.

Six foot 1 if we are being pedantic.

Like Pantilimon, there will always be exceptions. However taller is better for the same skills.

Pedant, right now you’re just like the girls on Tinder!

Casillas is probably the most overrated goalkeeper of all time. It must have been tough being the goalkeeper for Real Madrid in a two-team league and Spain when their opponents barely had the ball for 90 minutes each game…

He was great as soon as he left, wasn’t he?

To repeat what I said about Barthez: “Yeah, except when he won the World Cup.”

Casillas kept for during a period when they were struggling. They were a defensive shambles and he almost single handedly kept them competitive during that spell; hence the moniker San Iker!

Spot on. He is too small and his statistic are simply not good enough. Its not every ball that beats the defenders that must hit the net, but I say that “happen” in the game against Bayern last season and against Chelsea this pre season with Ospina in goal.

Hmm, Szcz had one of the worst shot:save ratios in Europe a few seasons back, but don’t let that statistics get in the way of the argument..

He certainly didn’t the past 2 years and became a great keeper. Pity we sold him.

Kwame Ampadu Down
Reply to  Pedant

If his decision making & positioning was better his size wouldn’t be an issue. Good enough to be Arsenal no.1? Not even close imo.

I’m not saying Shay Given is Arsenal quality or ever was, but he played in this league for years and he’s the size of an Oompa Loompa….

I’ve seen this argument time and time again here, and it’s endless. It used to happen a lot in boxing conversation many moons ago. Both sides have good points but you’re missing crucial details, height is simply a better indicator of reach. Reach is the bigger issue, but crucially reaction is usually the deciding factor in a keeper making an important save. Professionals learn their skillset in line with their natural strengths/weaknesses, as such a keeper like Ospina will have trained himself to avoid his own weaknesses. A shorter keeper, or one with a lesser reach, will usually keep a… Read more »

I have to say, I feel a lot more confident in Ooooospina as our number 2 than Emi Martinez at this moment in time (and who doesn’t enjoy shouting “Ooooospina” every time he attempts…and fails…to hoof it to the half way line?).

Not that I’ve got anything against Martinez, quite the opposite, but we simply haven’t seen enough of him in competitive action to put that much responsibility on his shoulders at this stage. It seems a season-long loan deal would be the most sensible option for both Emi – and us.

Made some great saves in some big games. He has my faith.

What about the mistakes.? He’s not good enough in his decision making.

I believe his mistake per minutes ratio will drop if he starts regularly. I believe that Wenger should create a healthy contest between them and dont just hand No1 grandees’

Probably will get a first spot for Europa and FA along with Martinez.
But in PL Cech will fill the role, unless Cech injured i can’t see him become PL starter, moreover if Cech is Wenger’s favorite no matter how good Ospina is and bad Cech in some period of time, the spot still for Cech

he gets a bad rap, but he’s always been decent, just never really looked like a no.1

You need to be more than determined. You need to be good at your job. You need to do more than stand rigid and go “sheeeeeeeeet” and then flap when Costa is standing in front of you before taping the ball past you into your net. I don’t rate Ospina. he’s no better than Almunia, Fabianski, etc in my opinion. Not even a good enough stand in.

I kind of agree and disagree, the season Scz lost the plot Ospina came in and he helped steady the ship, which could of easily seen us drop out of the CL a few seasons earlier. He does have things like this in him though: https://www.youtube.com/watch?v=liXeEouKpzo which is why I can never fully trust him so thanks David but your not my No 1.

I’m pleased someone sees him tha same as me. Why the hell did he let Szczesny leave ?

The fact that other clubs are not exactly queuing up to prise him away speaks volumes, he would not be number 1 for any premiership team. To small, rarely comes for or catches crosses, decent shot stopper but even that is negated by his size, seen numerous goals conceded due to both of those issues but because they are not obvious errors they go unnoticed.

Has some advantages over Cech
Being able to save penalties and dive to his right, being two of them

Like he did in the FA Cup final? Dive right for the Costa goal i mean.

He can’t and he will not. He is too small in size and proven himself incapable of keeping clean sheets. Good keepers, even when their defenders have had a bad day should somehow still manage a decent score sheet. 10 goals against Bayern last season, 3 already against Chelsea this season…common, that’s alarming and I wander if the coaches are taken count!!!

Hardly fair, and this coming from someone who wanted him shipped out and Szczesny kept.

Well if he grows a few inches and improves his decision making it might happen. An average keeper who fills me with dread. Never commands his area as a good keeper should. Letting Szczesny leave was a terrible error.

If Ospina is staying, then Martinez needs to go on loan. He is too good and has too much potential to just be a third rate cup match fill in.

I like him I really do, but I still prefer Szczesny who looks like he has really developed over the last two Seasons. Besides, he looks a genuine Gooner. But that’s done and dusted and time to move forward, Ospina has my support as long as he’s here.

Is someone actually going to wear the number 1 jersey this year ffs.

Please let Jens teach him how to deal with crosses!

great news – good for Ospina. This is all part of having a competitive squad.

Fuck me, running. I’ve grown very tired of this man. He wants to move, he wants to stay, he wants to be number one. He is not good enough to be number one between our sticks. I’ve tired of his theatrics, his flash in the pan performances, his face palming decisions that make blooper reels and have others wondering just what in the actual fuck he is doing. We let Emi sit, so this hobgoblin can pretend he can be somebody, someday, soon. Face it, he doesn’t want to move, because, why would he? We’re paying him £40K/wk to sit… Read more »

Let’s not forget so soon that he was in between the sticks during the FA Cup Final last season. If so ask Diego Costa.

Yep, Costa must’ve been laughing when he let in that soft goal.

It is more than “a summer of speculations linking him with a move away from the Emirates…” We were actually told he wanted to leave, and that a Turkish club had offered money, but our club was looking to get a better offer.

This is an interesting topic, since it is not black & white (but then again, what is) and the fan base is far from consensus about it. I made a comment earlier (under the last article we had about Ospina) about why I don’t trust him between the sticks. Here’s a part of it: “His height is simply too limiting and he hasn’t got enough tenacity to make up for it. Every time there’s a cross in the box and he has to go into a clash with a physical striker, it seems to be a problem. And I feel… Read more »

I thought there was a strict club rule that any keeper who wins the FA Cup must never play for us again.

Jaja Jaja all this discussion are so stupid. When Ospina was number 1 Arsenal went to champions league with Cech Arsenal had the 2 worse consecutive season no either Champion League or somebody proof me something different?

Great to hear from Ospina. I think he’s a class goalie and he’s saved our bacon on more then one occasion. Nice to hear him say he wants to fight for his place just like Giroud said a couple of months back. Any player that is committed to Arsenal is alright with me. COME ON YOU GUNNERS

Having skimmed down the comments I am shocked, surprised and disappointed the nobody has said “Ooooooossssspppiiiiinnnnaaaaaaa”! 🙂

Surely now the great German GK is in the coaching team, Ospina’s skillsets will improve!

Could be worse. Could be choosing between almunia and fabianski.