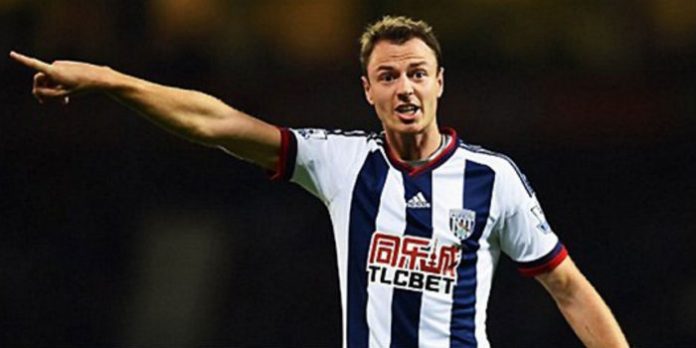 Tony Pulis says Arsenal have not made contact with West Bromwich Albion about a deal for Jonny Evans but confirmed the Gunners did bid for the centre-back this time last year.

The Northern Ireland international moved to the Hawthorns from Manchester United in 2015 and has since consolidated his reputation as a dependable Premier League defender.

The 29-year-old was recently linked with a move to Manchester City and the transfer speculation is something that Pulis is eager to draw a line under sooner rather than later.

“There has been no contact from [Manchester] City for the last couple of days,” Pulis told his weekly press conference.

“The directors are dealing with that. Jonny is a West Brom player and we want this situation sorted as soon as possible.

“Arsenal were interested last year and made an offer last year. I don’t think this club has received anything from Arsenal [this year].”

The Gunners recently sold Gabriel to Valencia and Arsene Wenger refused to rule out further departures after it was put to him that Inter Milan might want Shkodran Mustafi.

Arsenal: “Stay at home and save lives”

I presume this was at the same time that we were in difficult negotiations for Mustafi. At least we had another target in mind. Like Arseblog says, dependable if not rockstar status.

I remember that at that time a few of us were unimpressed with links to Evans. Just see the media go with ‘Oo he’ll be such a good signing for City’. Honestly don’t know if I thought wrong or it’s just the media perspective because it isn’t Arsenal

Good player. Not sure why some were being very snobby at the idea of us signing him last season – he’d get into our first XI now.

The reason was because every United fan I, and probably most people, knew would groan every time he was in their team. They all thought he was crap. Every time I saw him play I had the impression he didn’t know what he was doing. He only looks good now because he just has to kick the ball away as far as possible.

Compared to O’shea, Wes brown, etc Evan has at least consolidated himself at a top 10 team. So he can’t be that bad – better for this league than most of Wenger’s recent CB signings.

Not another Man U reject please! Standards keep dropping 🙁

again? we were 5th last seasons! so 4th would be a step up this season …

signing only top top quality players from now on

No issue with us bidding for solid reliable defenders.

As much as I dislike the man, were Pulis to be in charge of our defence, he could make us one of the best defensive sides in Europe.
Just a thought. Though West Brom are definitely better at it then we are, even if it does stifle their attack.

If Pubis were in charge, we’d all be talking about the great years when we could finish as high as 4th.
However, if you’re happy with mid-table mediocrity every year…

oh my word, please tell me its not true

I’ll never forgive Evans for what he did to Stuart Holden. Ended his career.

Might be a tough year. Might not finish top 4 … or 6. But Evans don’t play for us, and Pulis don’t manage us. We can hold our heads high … but not as high as we’d like, and way lower than we’re entitled!

Knowing Wenger, probably Evans was our first target and Mustafi was the backup.

Lol. Might be true, but prefer to deal in reality. For all I truly know, the board approached Pulis, and low-balled him!

Last thing we need is a Cback.

Your bloke is 29yrs now not 28yrs. Big difference.

Don’t understand the snobbiness surrounding this. I’d be glad to have Evans in our team. Watch the guy’s performances for Northern Ireland, he’s been pretty phenomenal for a team whose defence goes under the radar in terms of quality. There’s a reason Pep wants him, and he’s proved to be a very unflappable performer in a league that, let’s be honest, has pretty much forgotten what defending should actually be.

I’m a fan of the Arsenal. I will never apologize for arrogance!

Oh my days how low can we go?

One would hope Wenger has learned the lesson from last time he bought a Man Utd reject!!

In an ideal world, he just made a bid to mess with Pulis’ mind. Then again, we DID loan them one of our hot talents which absolutely baffles the mind. No wonder Gnabry left us after that debacle.

I have no idea what we’re doing anymore, and it’s only getting more and more puzzling every year 🙁