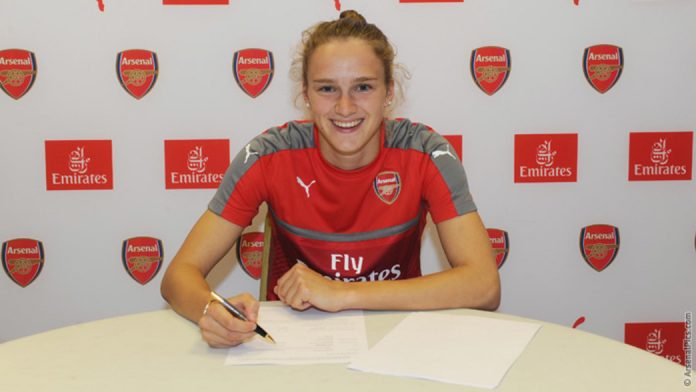 Arsenal Women have once again been busy in the transfer market during the summer, with the return of Josy Henning, the permanent signing of Louise Quinn and the captures of Scottish winger Lisa Evans and Swedish right-back Jessica Samuelsson. But one name really stands out in their summer business. Euro 2017 winner and new striker Vivianne Miedema- she spoke exclusively to Arseblog News ahead of the new season.

The 21 year-old joins from Bayern Munich. Miedema is a two time Frauen-Bundesliga winner with Bayern and has netted an incredible 45 goals in 57 games for the Netherlands. Arsenal announced Miedema’s arrival prior to this summer’s European Championships, where Vivianne led the line for hosts and eventual winners the Netherlands.

Miedema was second top scorer at the tournament with 4 goals, just behind her new Arsenal teammate Jodie Taylor. She scored the equaliser in the final against Denmark, before sealing a 4-2 victory with the clinching goal in the 88th minute. “I still get ‘chicken skin’ just thinking about it,” she smiles, just minutes after Arsenal’s 3-0 pre-season friendly win over Everton at Meadow Park.

Miedema is renowned for her professionalism and focus, a footballer wise beyond her years. But she admits that the emotion began to surface when she bagged that second goal in the final, “Everything came out in that moment, from the whole tournament, from the whole two years we spent working towards this.

“At that moment, we knew we were going to be European Champions and some of the girls started crying afterwards. It was just amazing.” Vivianne hopes that the tournament will carry a lasting legacy for women’s football in her homeland too. She reflects that hosting and winning Euro 2017 ought to amplify the impact of Holland’s victory.

“Hosting the tournament was a great thing for women’s football in the Netherlands and there were great crowds. The fact that we won it makes that so much better, we are already seeing some changes which is great because we need women’s football at home to get way better. It’s important for the team too to keep our focus and make sure we qualify for the World Cup now.”

Arsenal have three other ‘Dutchies’ who played their part in the Netherlands victory. But the fiercely independent Miedema insists that the presence of Sari van Veenendaal, Danielle van de Donk and Dominique Janssen wasn’t the most important factor in her decision to join Arsenal. “That wasn’t so important to be honest,” she considers.

“I went to Bayern when I was 17 and I was alone there so I knew I would be fine going somewhere without any Dutch players. But it’s really nice to have some Dutch girls here, especially because they’re all super nice. They really like the club and feel happy here and that confirmed my good feeling about Arsenal.”

Miedema had been looking for a new challenge after 3 years at Bayern Munich and Arsenal faced stiff competition for her signature, “I have been in contact with a lot of clubs since December last year,” Vivianne explains, “Arsenal came in in early January I think. I went to visit a couple of clubs and I just got a really good feeling here. The setup is top, top class.”

The prospect of a challenge in a new country convinced her to move to England, but it was Arsenal’s attacking style that really won her over. “I had been playing in the Bundesliga for three years and I wanted to try something new. I didn’t really agree with the style of football we played at Bayern and I want to become a better player. If you look at Arsenal, they play amazing football and that’s what I missed at Bayern.”

Vivianne is a tall, rangy number 9 with peerless link up skills, a fierce turn of pace and the ability to find nooks and crannies of space in the penalty area. She is strong in the air, has two good feet and her finishing is meticulous. She is quite possibly the best centre forward in Europe. At Bayern, she had been used principally as a target striker, holding up long balls and bringing others into play.

Arsenal play a more open style with an interchangeable front 3 and full-backs that provide service from out wide. That said, she will compete for a central berth with England’s Jodie Taylor and young Beth Mead, who scored 77 goals in 78 games for Sunderland before moving to Arsenal in January. Miedema says she can see herself playing alongside the Gunners’ two other well established strikers.

“It would be amazing if Pedro could find a way to play us altogether,” she ponders. “You could see Jodie’s talent at the Euros, scoring amazing goals and playing really well. Beth is a great young talent, only just a little bit older than me. I’d love it if we could all play alongside one another, but we’ll see.”

With the likes of Danielle Carter, Heather O’Reilly and her ex-Bayern teammate Lisa Evans likely to flank her and Jordan Nobbs, Danielle van de Donk and Kim Little behind her, Miedema won’t want for service in an Arsenal shirt. Vivianne’s exploits in Dutch orange have assured her legendary status, but everything this 21-year old touches has a habit of turning into gold.

Well at least the Gooner women are getting top signings. Hope we can win the League ,been a few years since we did. That attack is lethal

Fingers crossed! City and Chelsea both look weaker this season, hopefully the new signings can gel quickly and we can have a real go at the big spenders.

Also, off topic, good to see our development side beat the Sp*rs first team. That’s almost the equivalent of our U19s beating Tottenham’s first team in the men’s game.

Yup, City have got some upheaval with Duggan and Bronze going, Liverpool have lost van der Sanden, Arsenal have added well and hung onto key players. They’ve a great chance this year.

Spurs first team are pretty awful. Watched our ladies first team near them 10:0 earlier this year.

Only if our Men’s team can replicate that eh.

Cheers to the only Arsenal team I will be following next two years.

At least there’s some good news at Arsenal

You’re not allowed to say that kind of stuff round here, don’t you know?

45 goals in 57 international caps is a phenomenal record. I wish her and the rest of the team every success. I’m confident about our league prospects this year.

The Women have got a great squad this season, added quality pretty much everywhere on the pitch, to either improve on or re-enforce the existing team.
Anything less than Champions League qualification would be a shame. Maybe another FA Cup day out at Wembley too?
Looking forward to this season, really think they have a chance to win the league.

most exciting signing of the summer!

Are player transfers in the women’s game similar to that of rugby? i.e. Shorter contracts and moves happen at the end of the contract rather than paying transfer fees. For me it would be an interesting view considering what Arsene has said regarding the men’s transfer business which could see more bosmans and shorter contracts in the future considering the preposterous fees being paid for very good players but also bang average players in the Premier League and to a slight extent the rest of Europe.

Yes, most contracts are 2 years- even at somewhere like Arsenal or City and transfer fees are rarely involved. The record fee in England was when Chelsea bought Fran Kirby from Reading and that was about £50k.

Tell you what, I’ve got “chicken skin” thinking about our midfield and attacking line-ups this season.

Great interview, Tim. Miedema does indeed have an old head on young shoulders and is such a complete striker at the age of 21! I am astonished that we have managed to sign her, to be honest. I saw her for the first time at the Euros, and after she got into her stride I was more and more impressed. The squad is looking superb and Arsenal Women have a big chance for glory this season.

She is incredible and she seems so much older than 21. Was really expecting her to say the Dutch girls were a big part of her signing but she totally shot me down on it! 🙂 She was also very forthright about Bayern Munich’s style. I don’t imagine she will be with us much more than a couple of years, but we will get plenty of bang for her buck. I think she’ll have a couple of top goalscoring seasons, then someone like Lyon will come in.

How can the women’s team act almost in complete contrast to the dysfunction of the men’s team???

Big ups to the ladies though. Her and Nobbs…lethal

Woah what a great signing

Hopefully Kim Little can stay fit so the two can play alongside each other. Arsenal Women are looking to have put together a very good attacking unit.

Props also to Pedro Losa. He’s gradually getting the team back to the level everyone was accustomed to seeing them at.

NaanBread and some Masala Tea

This article (and the discussion here) spurred me to log in to Youtube and check out Women’s football.

Damn, it’s filled with some graceful attacking play and beautiful goals.
And their touch is second to none.

This website uses cookies to improve your experience while you navigate through the website. Out of these, the cookies that are categorized as necessary are stored on your browser as they are essential for the working of basic functionalities of the website. We also use third-party cookies that help us analyze and understand how you use this website. These cookies will be stored in your browser only with your consent. You also have the option to opt-out of these cookies. But opting out of some of these cookies may affect your browsing experience.
Necessary Always Enabled
Necessary cookies are absolutely essential for the website to function properly. These cookies ensure basic functionalities and security features of the website, anonymously.
Functional
Functional cookies help to perform certain functionalities like sharing the content of the website on social media platforms, collect feedbacks, and other third-party features.
Performance
Performance cookies are used to understand and analyze the key performance indexes of the website which helps in delivering a better user experience for the visitors.
Analytics
Analytical cookies are used to understand how visitors interact with the website. These cookies help provide information on metrics the number of visitors, bounce rate, traffic source, etc.
Advertisement
Advertisement cookies are used to provide visitors with relevant ads and marketing campaigns. These cookies track visitors across websites and collect information to provide customized ads.
Others
Other uncategorized cookies are those that are being analyzed and have not been classified into a category as yet.
SAVE & ACCEPT
wpDiscuz
24
0
Would love your thoughts, please comment.x
()
x
| Reply