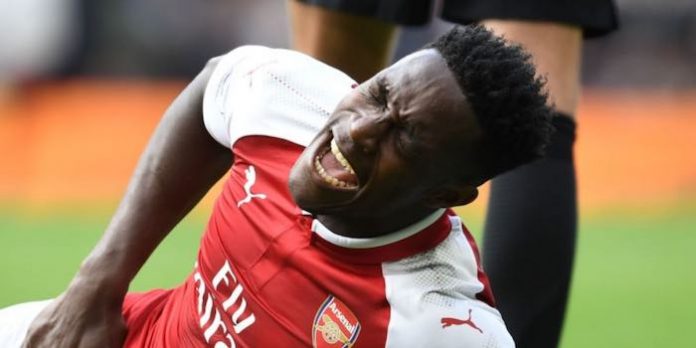 According to the Telegraph, Danny Welbeck will be sidelined for at least a month with the groin injury he sustained at Stamford Bridge on Sunday.

The England international, playing his sixth consecutive Premier League game, pulled up inside the final 10 minutes and was replaced by Olivier Giroud.

Welbeck went for a scan today and will undergo another tomorrow as the club look to grasp how bad an injury it is. As things stand he could miss six Arsenal games, plus England’s final two World Cup qualifiers against Slovenia and Lithuania.

As anybody who has suffered this injury will testify, it’s bloody painful, to the point where kicking a football is nigh on impossible.

Welbeck has started the season in good form, scoring against Leicester and Bournemouth. His position in the side will likely fall to Alexis with Alexandre Lacazette and Olivier Giroud battling for the central striker role.

The unfortunate story of our British core. Injured, play back into form, start playing well, get injured again.

I wish Danny good luck so that he can come back strong!

Ox in the Box
Reply to  K M

Was I the only one relieved its only 4 weeks? Its definitely unfortunate, but I was afraid it could be even more severe considering his past bad luck with injuries. Get well Danny, you proved you are an asset to the team as well as very decent man!

bidOnLard
Reply to  Ox in the Box

Problem is this easily becomes chronic and hard to shake off…

Mesut O\'Neill
Reply to  Ox in the Box

4 weeks could easily turn into 4 months

Donald\'s Trump
Reply to  Ox in the Box

Wasn’t there a time Giroud was projected to be out for 3 months but he came back in 4 weeks because he has “such a robust physique?”

Such a bloody shame after a promising start to the season. Get well soon Danny.

Yep, big shame, he’s been laying very well. I was kind of expecting it to be a lot worse though, so I’m definitely relieved it’s not expected to be a longer absence.

…and after all we shelled out on him!

The Calm
Reply to  Declan M

He deserves better than this.

Can’t wait to have him back!

Disappointing for Welbz. We have zero worries replacing him in the squad, I suppose that’s the positive we can glean from injuries this season.
I think he’ll come back just as beastly as he’s been so far this season.

Of course it’s a real shame but we haven’t seen a front 3 of Alexis, Ozil, Lacazette yet. It wouldn’t be Arsenal without players getting serious injuries.

4 weeks is an improvement on the usual. Shad in.

Headline should say “at least 4 weeks.” The most concerning thing in this article is this:

“Welbeck went for a scan today and will undergo another tomorrow as the club look to grasp how bad an injury it is.”

I just hope it’s not any worse than 4 weeks out. Best of luck, Danny. Get well soon!

Sky Sports used a caption yesterday that this was the most consecutive starts Welbeck has made since (I believe) 2014. Damn. It’s such a pain not to be allowed to get consistency. He is such a decent player, and the major criticism of him is that he lacks ruthlessness/confidence in front of goal. As you see with most players, this is the kind of thing that comes with consistency. Hopefully this won’t continue to be a trend for him.

yet he is our leading scorer with 3 pl goals im sure he would added to the 3 with the teams we face in the next month.

Could have been worse…let’s hope it doesn’t turn into a weird long one…get well soon!

As bad as that news is for Welbeck, with the team’s we are facing in that 4 weeks I would love to see Sanchez, Ozil and Lacazette get time together

Danny, you have been playing so well so far this season and seem to have conqured the goal vodoo..what bad luck. Chin up and hoping to see you back on the pitch asap…

I think one of us will have to change our name ??

Considering his bad luck with injury i am relieve that it is only a month in month were we play lesser team but surely he will be back before or after the everton game when will have 2 games vs swansea and redstar tp get him back up to speed as he will be crucial after that for.the bacl 2 back derbiea vs city and spuds.

I don’t think Lacazette has much battling to do to secure the #9 position. Giroud will play Europa and Cup games and be an impact sub for Arsenal if he is needed. I’m bummed out about Welbeck, he was really making a difference for Arsenal. I’m gonna miss his constant harassment of goal keepers and his work ethic.

3 goals already. Hoping he can shake this one off and get to 20 this season. I think he has it in him.

I think we got shot of Dr Nick and so I’m hopeful one month doesn’t turn into fourteen months.

Does Wenger risk any from Giroud, Lacazette or Alexis in the League Cup this week?

Akpom up front vs Doncaster then, with Walcott and possibly Ntekiah?

Get well soon bro. I am gradually warming up to this guy; he is quite an honest and sincere worker. Goes about his job with a smile on his face.
I am relieved its only 4 weeks.

Groin injuries have a tendency to become nagging. Four weeks is probably the best case scenario…

Alexis and Lacazette up next.

The only positive is if it is only 4 weeks, he couldn’t have picked a better 4 weeks to miss in the season given our upcoming fixtures & with an international break thrown in the middle too…

Kinda true.. but also those are the games where Welbs coulda started filling his boots

Not so bad given his history. A fresh of breath air as we enter our fateful November games. I’m fine with that.

Why o why as they come to Lithuania all British Arsenal players have to get injured or not fit enough? I really hope Jack will storm Doncaster or Walcott – anyone? I really wish to see you guys.

Well thats not too bad. Looked like he was getting some form though

Our ability to get players bsvk from injury on time these days has hugely improved, I’m hopeful on Welbeck too..some very winnable games now with Alexis to slot in..