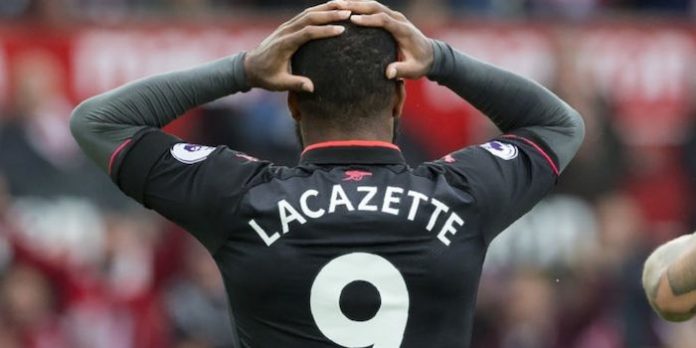 Alexandre Lacazette may only have played a handful of games for Arsenal but Arsene Wenger thinks there are similarities between his compatriot and the club’s legendary striker, Ian Wright.

The summer signing from Lyon has two goals to his name since joining for a club-record fee in the summer and the boss is hoping he can add more by mirroring the aggression that was the hallmark of Wright’s era.

“There are similarities,” Wenger told Arsenal.com. “Maybe Lacazette is a bit less aggressive than Ian Wright but hopefully he will get that because in England you have to survive. Up front is a very difficult position because you get harsh treatment sometimes.

“He looks to have shrewdness and overall I believe if the team plays well he looks always to be at the end of some interesting movements.”

Wrighty signed for the Gunners from Crystal Palace 26 years ago and went on to score 185 goals in 288 appearances. In Wenger’s eyes the game has changed a fair bit for strikers since his former charge was in his pomp.

“I would say the speed of the defenders has improved a lot [from when Wright was playing]. The numbers of defenders you have in front of you has improved as well because today everybody recovers very quickly.

“What has not changed is that a striker always has to choose the optimum decision in the situation he faces. Maybe there’s less time to make that decision and to execute it. You need always to make intelligent decisions.”

Arteta: Why would I want to lose Lacazette?

Good assessment on Lacazette. Let him add some hunger and agressiveness

I wonder if we could have got Morata or Lukaku is we pushed a bit more or are they too similar to Giroud?

I still think Laca is Alexis’ long term replacement. I think he will still need to play with a Giroud-type striker knocking the ball down to him.

hindsight is 20/20. In retrospect, I might have had a little too much of the wobbly juice when initially posting this comment.

But having a game on Monday during a Euro week is still wrong, no?

It’s the first time I’ve been thumbed down on this beloved site!!!

Keep this up and this wont be the last time!

Maybe try match him with alexis for once..

He must be very proud, quite an achievement

What are the thumbs downs about? Oh yeah it’s the Interweb…

Mine is for the off-topic

People are clearly dismayed that the mighty TGSTEL has been knocked off his goal scoring pedestal. And by a Spud at that!!! That’s where my red thumb came from anyway.

I reckon Freddie is the top scoring Swede.

Who said Cliff Bastin was talking about goals?

He’s only played one season in the PL so Freddie has scored a lot more.

Everyone needs to go here and vote for Giroud’s goal

He started that from pass and then a run all the way from our half. Granted it was the aging Flamini but he had to catch up with the man on the ball too!

The other candidates (and I’m being completely objective here) are shit.

I thought the Boateng one was pretty special to be fair

He’s a bit of a combination between Wrighty and Henry.

Good thing is we have so many options now up top.

We have Lacazette but ALSO Giroud who can add muscular approach but also an underrated deft touch. We can also put in Alexis or indeed (if he continues to improve and avoid more knocks) Welbeck.

Then there is the single use Walcott who can be very effective if “chanelled” to his strength.

All excellent tools to have provided Wenger uses them wisely to their strengths.

A Gunner with Psychic powers

At the end of the season either one of Man United or Man City is gonna win the league , Alexis Snake and Mesut Snake are going to City and United , they will get stronger and will be contender for the next seasons again . Liverpool are gonna have Keita and will buy Van Dijk , Tottenham will be even stronger and Chelsea will stay as strong as always and Arsenal will officially become a mid table club and will have to fight for Europa league place for many years. No player will want to come to Arsenal anymore… Read more »

Charles chama
Reply to  A Gunner with Psychic powers

That is Wenger’s strategy, I think he is still hurt by last season’s boing which he interpreted as lack of appreciation from the fans.He will ensure that the club is finished by the time he leaves! Then you will remember the glory days and miss him!

No one likes boing.

As does Zebedee I believe?

goongot
Reply to  A Gunner with Psychic powers

I am not the only one who thinks we play better and would probably survive and be back in top4 without the fancy duo’s.

ODB
Reply to  A Gunner with Psychic powers

Too negative. I think Liverpool would win the league though.

Martin
Reply to  A Gunner with Psychic powers

Fergal (captain optimistico)
Reply to  A Gunner with Psychic powers

Oberon
Reply to  A Gunner with Psychic powers

We will need to ratchet up scoreline with goals. City and United are already chalking up a significant number and it may come to that at end of season. Also at 5 games in, the league is already beginning to shape up with all the front runners last season starting to get into pole positions. If we want to compete (even for top 4) we better get our act going now. Traditionally it was 10 games in when the dust settled but the competition is less forgiving now. All these slip ups against Stoke have to be cut out. NO… Read more »

City had a better start last year and neither of the front runners have had to play any of the top teams. Utd seem to be pretty normal against teams until the last 10 minutes where they end up hammering teams. I’ll be interested in how they fair when they play the better teams and those teams take their chances. 10 games is still the mark and worrying if we struggle against a good defensive team like West Brom is silly as all teams can struggle to break down obdurate defensive sides. Stoke was they only dropped points that we… Read more »

So I expect him to be on the bench then? 😉

Sorry, I know this isn’t the topic but:
Fuck monday night football.

Off topic a smidgen, but what happened to the ability to post in the main blog? Just up and vanished today. OUTRAGEOUS!!

Hope he comes good. Lots of pressure on him, seeing how the strikers for the other top teams have come in and are doing so well. He’s up against Kane, Jesus, Morata and Lukaku.

Well if our midfield and wingers were more dangerous then our strikers would get more space and time, as defenders would have more players to worry about and be forced to get out of position. Mesut Ramsey Xhaka Elneny Iwobi all need to be goal threats and not just “CREATE CHANCES” for others…

Agreed. Train him up like Mr Burns did Santa’s Little Helper.