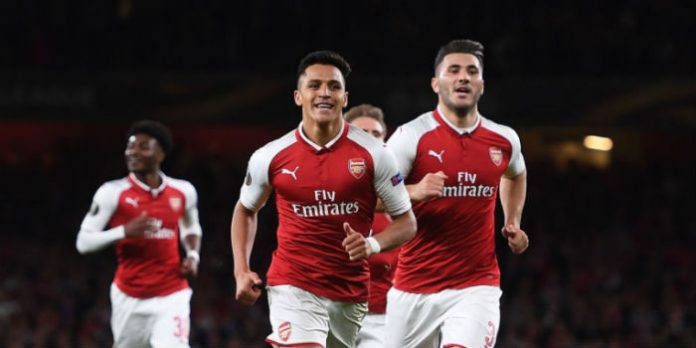 Alexis Sanchez says he’s been particularly impressed by Sead Kolasinac’s strength and intelligence on the ball following the Bosnian’s eye-catching start to life in the Premier League.

The left-back has proved a real attacking threat for the Gunners since his summer move from Schalke, helping himself to three goals and three assists, including one of each in Saturday’s 2-1 win over Swansea.

While Alexis spends matchdays on the same side as the 24-year-old, he admits that in training, the new boy makes life very difficult for him.

“It’s tough [against him in training] because he’s strong and he’s hard to get around!” Alexis told Arsenal Player.

“When it matters [in games], he finds me and makes good passes so I can score. He is an intelligent player who can create good goalscoring opportunities.

“He’s already demonstrated his quality. He’s scored goals, provided assists and shown what he can do both in European and league games.”

Club to evaluate loanees at the end of the season

Kolasinac could maybe find him a pen to sign da ting with?

Or he could block the door.

We can but dream!

3 goals and 3 assists so far this season – involved in more goals than any other Arsenal player. Seems he also finds the net when it matters.

Lack of Perspective
Reply to  Maniac

Finish was an unusually composed one for left back. Kolasinac upfront next.

Wasn’t Drogba a right back at one point? Or am I making that up to suit the point?

Rectum_Spectrum
Reply to  Lack of Perspective

“When Drogba finished school he moved to the city Le Mans to study accountancy at university and he had to change clubs,”

an accountant originally then. don;t know if that helps you out at all.

Lack of Perspective
Reply to  Rectum_Spectrum

Who needs wikipedia when you can just make it up as you go along.

D.J.
Reply to  Lack of Perspective

Or you can just edit Wikipedia so it confirms what you want to be true.

ritabhash
Reply to  Lack of Perspective

Your name sums it up

lee dicks on
Reply to  Hermitian

Just stay as a hermit Ian

Hermitian
Reply to  lee dicks on

Same old lee dicks on, dIcking about with his diction

He’s been our signing of the season so far! We should get more players with his attributes to replace the half-hearted slackers in our team

The Beast of Bosnia.
One of our better signings of recent years and on a free also….absolute steal.

If you all love him so much, it maybe is about time people started pronouncing his (sur)name correctly: that is, the accent should be at the “i”, rather than at the first “a”.

I don’t know what you are talking about. Tank is Tank.

How do you hear us pronouncing his name? Just curious..

Good question! I admit I have no idea how the majority of fans pronounce it!

I simply assumed that the fans pronounce it the way the (English) pundits/commentators do.

How do you explain this, then?

lee dicks on
Reply to  Possession

He play with the love he have for the club….He played because it was his dream playing for the gunners and putting on the jersey.with love you can move mountain. Much love to you sead, keep on the good work .COYG

Lets hope the Tank brings De Bruyne back to earth. Maybe it’ll help him appreciate the Invincibles’ achievement a bit more, especially after his comments recently.

Kolasinac is a brilliant transfer for us. He reminds me of mongo from blazing saddles.

You know what time it is, lads……

KOLA FOR DM. The long awaited sequel to “Vermalaen for DM”.

Ha. Gawd I hope not. Play him where he’s good and leave it be.

Which was itself a sequel to Kolo for DM.

Either way, not very interesting

Not the worst idea in the world to be honest. Granted, he’s fucking brilliant where he is though.

How tall is he?

Not that the media will want to highlight that fact.

He is good and strong

His physique means his ability is always going to get overlooked, but he is an absolutely fantastic footballer.

Gareth Bale was a left back at one point right?

Difference being that Bale was shocking as a left back, IIRC his record for Spurs there was probably, and still is, the worst record of all the left backs ever.

It’s a beautiful record that still is his today ?

So he’s healthy for Sat? Personally if him playing means shooting him up with painkillers I’d rather he sat ManC out — rather than him playing one match and then being absent for 2 months.