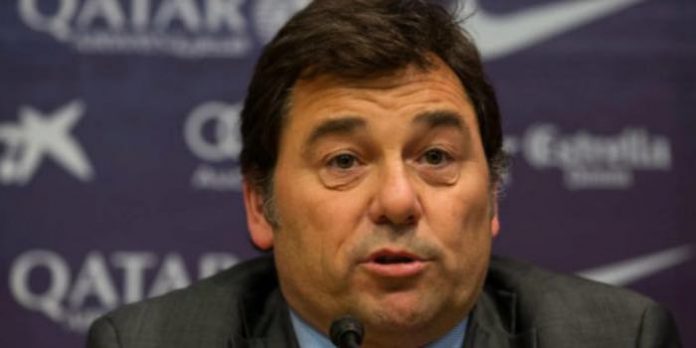 According to newspaper Sport, Arsenal are set to appoint former Barcelona director of football Raul Sanllehi to a role they describe as Director of Operations.

The 48 year old’s departure from the Catalan club is yet to be completely finalised, but after a shake-up at the club this summer he resigned his post.

Sanllehi was thought to be unhappy with the departure of Neymar to PSG – having played a key role in bringing the Brazilian the club in the first place – but will leave on good terms with the club he’s worked at since 2002.

He is, according to the report, good friends with Ivan Gazidis, and speaks a number of languages so could well be set to replace the former chief negotiator Dick Law.

He left the club at the end of September to return to the USA to spend more time with family, and Arsenal clearly need a replacement.

Former Gunner Marc Overmars has been linked in recent weeks, although those stories have been played down from both sides.

Let’s see how this one plays out.

If he’s managed to survive that long at a club with the Byzantine internal politics of Barcelona, hopefully he has the skills to unpick Wenger’s vice like grip at Arsenal.

I demand a DNA test.

If I understand science correctly (and I’m pretty sure I do), all we have to do is sit him on top of a microwave for a few hours wearing an Arsenal shirt and holding a lock of Cliff Bastin’s hair and we should be good to go. Either that or he’ll up like the Incredible Hulk, but either way it’s a good result.

Is he The Saviour?

Director of Operations instead of Director of Football: smart naming, demonstrating that he won’t touch anything that is Wenger’s

No chance of a sexual harassment case either then, that’s a relief.

I don’t know why anyone would want a director of football anyway, look at everton, its clear koeman did not pick most of those players, same with Tottenham during avb term, how many of those players are still around. The examples of DOF failing managers when they have too much power are boundless, Real Madrid is great example ozil and di maria, Claude makelele etc. The only way a DOF works is if the manager and DOF have a good relationship, much like Dick Law and arsene. What are the chances of that happening at arsenal. If the DOF is… Read more »

Yeah, DOF is a bad idea. That’s why every major club in Europe has one.

Great point! Look at everything Arsene has established with his Dick (Law) – great player signings that helped us win the league, sort out players’ & his own contract situation well before time to avoid crisis, pave a clear path for AW’s succession & so on. Every major club should follow Arsenal model and wait for player bargains in the transfer window even at the cost of winning the league – who cares about winning the league anyway, buying a player for cheap is more important! RM & Barca are great examples of failures with no league or champion league… Read more »

I could well be wrong but I was under the impression that Sanhelli’s job at Barca was more akin to a negotiator / contract closer. He usually got involved once an approach had been made by the club.

Txiki Nando’s with the lads?

I hope this is true. Like it or not Barcelona is a club to emulate. If he brings us a step closer to thst, then fantastic.

If he can make us one of the two teams in a two club league, with all the riches that go with it, that would be great.

providing the other club isn’t Sp*rs.

The grin of Podolski
Reply to  Tim

Has Barca’s transfers been that great? They had a couple of sure-fires like Suarez and Neymar, but they paid top dollars for those, something nobody expects arsenal to do. Other transfers like fabregas, chygrinskiy, Hleb(thanks for that one btw), Song and Douglas (poulinho this summer is properly to early to grade, but let’s just say I’m not optimistic).
Barca have been carried by the best generation I club football ever and by some very expensive signings, not by good transfer deals.

Andy Mack
Reply to  The grin of Podolski

I think he’s more like the guy to get the deal done after others have made the decisions over who to buy (like Dick Law tried to do).
But yes, Barca (like most other clubs) have had some real (expensive) failures transfer-wise.

OnlyComeToSeeEboue
Reply to  The grin of Podolski

I wouldn’t say no to Rakatic!

Barcelona’s transfer business has been pretty poor over the last few years, overpaying for plays which weren’t of the requisite standard. Turan, Gomes, Alcacer, Matheiu, Vermaelen. Their replacement for Neymar is Deulofeu. There is a reason why they let him go.

Dat Vermaelen that we pulled though 😀 Good times.

Dembele? 100M for an unproven teenager who cost 10M a year before?

To be fair you are taking this out of context. First off its Barcelona, they are one of the richest clubs in the world. You know they can afford to pay more.
Dembele was a post Neymar deal, everyone knew they had 200m to spend and we’re desperate to replace a gaping hole in their team.

I like Deulofeu..and Dembele is really their Neymar replacement

It will be better to get insights from barcelona fans on this man. Most of barca fans feel their club is in crisis and with their current board the club , they really are doomed.

Yet they’re 5 points clear of Real in La Liga, have scored by far the most in the league (26-3 goal difference), won 3 out of 3 in Champions League…

Crisis – what crisis?
They do have a squad depth issue though, which will screw them at some point… But credit where credit’s due!

That being said, I hate their guts!

This would be delightful.

So this is the guy that was in the mix of some of the worst stories that erupted in recent years from Barcelona. including Neymar movement, tax frauds and a pretty bad transfer actions as some people here said.

Not sure about him.

As long as he gets the job done there won’t be any problem.

Smart man .. to come over before Theresa closes the door on refugees.

Refugees? I know there’s been political unrest in Spain recently, but I didn’t think it had got that bad.

This is a man who prepares for the future which is exactly what we need.

I’m always amazed croissants and not used more as sandwiches. Light, fluffy and very welcoming of mayonnaise. Plus they are equally adored by sliced meats and cheese.

Croissants are good for sandwiches, especially toasted sandwiches, but I am not so convinced about the mayonnaise. The buttery richness of croissants renders eggy, creamy mayonnaise (unless used in small quantities) potentially superfluous and overwhelming. Better to add some sharpness in the form of mustard or even some lemon zest.

Generally they’re too sweet to be considered as a sandwich ingredient for the British palate.
Much better for dunking in a big cup of fresh breakfast coffee…

Maybe his friendship with Gazidis is why Barca paid way over the top for Vermaelen and Song. Which is not a very good indication.

Let the tapping up begin ! 🙂

La Masia here we come! Let’s see what they’ve got for an understudy to Hector.

His first order of business will be to buy a newspaper editor.

A director who knows a thing or two about football? Hell no! We don’t like those at AFC! (Sarcasm font)

Leaking a news story to appease fans anything to do with todays AGM, or is that just me being cynical…

Judging by the pic, Bryan Robson has really let himself go.

If he helps us find the next Messi he’s alright.

I think that’s down to the scouts (and AW agreeing with them). He will however help to get deals over the line once players are identified, which Dick clearly struggled with. Not sure how restricted he was though. His first port of call will be to sort out the internal contract situation, which despite the sound bytes, are in a ridiculous situation. Not an overnight fix, and maybe too late for Alexis and Mesut, but a step in the right direction for the future and an acknowledge of our flaws.