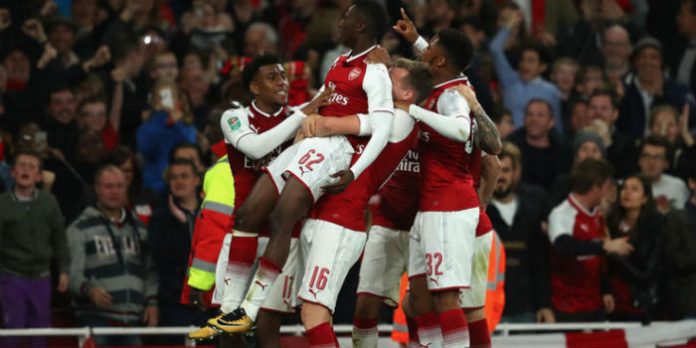 Arsene Wenger was full of praise for 18-year-old Eddie Nketiah after the striker came off the bench to grab a match-winning brace to send Arsenal through to the quarter-finals of the Carabao Cup at the expense of Norwich City.

Making his home debut, Nketiah scored with his first touch on 85 minutes to take the game to extra-time and then crashed home a headed winner as the Gunners ran out 2-1 winners against the Canaries.

After the match, it was pointed out to the boss that Nketiah is the first player to score for Arsenal who was not born when he first took over in 1996.

“I’m impressed that he wasn’t even conceived when I was first here,” remarked Wenger.

He added: “He showed great anticipation in the box to score and that’s a quality that you cannot teach at that age,” Wenger said.

“I like the second goal that he scored because he’s not tall and he got very high – it shows that he’s a guy who wants it.”

Wenger made 11 changes from the side that beat Everton at the weekend, giving a debut to Matt Macey in goal and including a host of young talent, in addition to Nketiah, on the bench.

In addition to Reiss Nelson and Ainsley Maitland-Niles, three other Academy graduates, Chuba Akpom, Josh Dasilva and Jo Willock, got game time. It’s a situation that Wenger takes pride in.

“This is the competition every year that we decide to educate young players who have good potential,” he added.

Willock and Nketiah impress Arteta with their attitude

I’m just pleased I know how to pronounce it now… Took me ages to finally hear Szczesny. Was basically saying the s followed my a cough and a mumble for like two years.

The first goal celebration.. Who did he push? Was well funny

Looked like Joe Willock to me. He seemed genuinely irritated that someone had the audacity to interrupt his celebration…

Awesome debut, especially given the circumstances in the match. Would be great to have a quality home grown striker.

He turned a really dire match into a really enjoyable evening. I hope his career takes off if only to say I was there

We need to play him a half in Europa league to gain more experience as we are about to get qualified as Table toppers.

I would be interested to see what would happen if you just took the entire u23 squad and played them considering It is very unlikely we won’t qualify.

Probably be a disaster but it would be entertaining

If we Beat Red Star at home next week, we can do that for the last 2 games. What a luxury that would be!!

After the goal went in, everytime he touched the ball, the fans were chanting ‘Eddie! Eddie! Eddie!’

he’s one of our own

What a night! Really enjoyed Eddie, was praying for his hattrick. Can’t wait to see how he develops!

SUPER! Lets loan him to WBA until his contract expires!

Sarcasm isn’t too popular around here

🙂 Sarcasm aside, I believe that Eddies performance is gonna be a massive confidence boost for all the academy players!!!

When Wenger first started to use the League Cup as an education/audition for the young players there were many who complained that he didn’t take the competition seriously. However he has revitilised the competition single handedly!

Here is to Wenger turning our Academy into a production line like Barca’s.

Did Barcelona ever create a “Niklas Bendtner”?

Exhibit A – English public exaggerates the abilities of an English player causing undue pressure. Just let them develop according to their abilities

Destined for the number 25?

“I’m impressed that he wasn’t even conceived when I was first here.”

Nothing speaks more about a manager’s longevity than this.

That’s what you do when the manager sends you on…impact the game…well he may or my not have a career at the club who knows? But he won’t ever forget this moment…All on could learn a thing or two from this lad. One thing is for sure is there are a few youngersters knocking at the door and I believe Wenger’s had it with under performing first team players…yes they know who they are..and I think they will be shipped out in January and let some of these young lads get a chance. I was hoping to see Joe Willock… Read more »

This will likely be Chubas last season. Sadly I am afraid he looks like he might have to pass the baton.
Well played Ed

Yep, the fact he takes up one of the 25 man squad positions will mean he is released this summer.

Maybe he can get some appearances under his belt and play well enough to earn himself a decent move, for his sakes. I thought he was really lively yesterday – he and Nketiah made a big impact (certainly put Walcott and Giroud to shame).

It was a real treat to see a young man enjoying his football. He clearly wanted it more than anyone else- especially for the second goal- and that desire was something we were lacking until he came on.
Its still early days, but I liked what I saw from the lad today. Here’s to him gaining some experience in the remaining Europa League group matches and in training with the first team squad before a likely loan out in January.

Very much enjoying Wenger using BTSport talk to try to futureproof this guy from the British media right away. Wenger knows.

Who was that guy warming up, Eddie pushed aside in the celebrations of his first goal?

Heh. I too noticed that, in fact I think he pushed him twice and the first one was very close to an assault ?.

Blogs have you seen this.. http://www.mirror.co.uk/sport/football/news/arsenal-snare-barcelona-chief-instrumental-11404928
addition to our scouting/transfer department