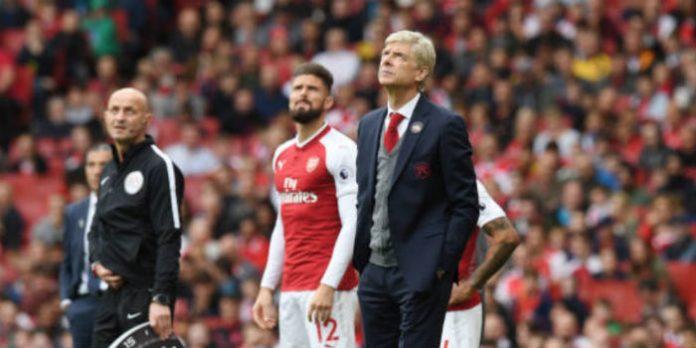 Arsene Wenger says he was pleased to secure three points and a clean sheet as Arsenal beat Brighton 2-0, however, he admitted afterwards that his side had lacked ruthlessness in front of goal.

The Gunners dominated proceedings from the off at the Emirates and ended the game with 65% possession, 25 shots on goal, including 11 on target.

The woodwork and some decent saves from Seagulls’ keeper Mathew Ryan kept the visitors in the game in the first half before Alex Iwobi’s 56th-minute strike put breathing distance between the sides.

“I would say that we kept a clean sheet, we got the points and offensively we were certainly not ruthless enough,” said Wenger at his post-game press conference.

“Our focus and the pace in the game was a bit in and out, we had good moments and as well moments where we lost a bit our concentration in balls that we usually don’t lose, but we got what we wanted and [it was] just before the break.

“Our last international break was a nightmare, this one is a bit better.”

The win, a third this week, takes the Gunners up to fifth place in the fledgeling Premier League table and sees them level on points with Chelsea and one point behind Sp*rs. The upward trajectory has pleased Wenger, especially after the criticism his side drew after their 4-0 defeat at Anfield in August.

“I knew that after the game at Liverpool everybody did write us off, I knew that it just depends on us, on how much we respond,” reflected Wenger.

He added: “It’s very early [in the season], seven games played and 31 to go. Last year after six games Man City was top with 18 points, so let’s not go to pick conclusions. They played outstanding yesterday [in their win over Chelsea], but there’s a long way to go.”

Sanchez was a bit rusty, Ramsey was a bit unlucky, but what we’re really missing is Welbeck’s shoulder!

3 points and we can get better and more ruthless.

I disagree with the boss. The ox really stood out today. During his 3 minutes on the pitch for Liverpool who is now below us.

Every pundits favorite team Liverpuddle, the team who hasn’t won the title for over a quarter century since the inception of the Premier League! But every bloody year, its their year where as every year, we are suppose to be going down hill. Genius tactician shouting, acting all hysterical on the side lines and listening to rock and roll organising a water tight defense apparently and being very smart in the market not selling Coutinho, buying the OX. They put four past a ramshackled slection (Inexplicable as per usual) by the outdated dinosaur Wenger. Meanwhile we have moved above them… Read more »

I have great respect for Klopp’s fondness of heavy metal. I imagine him in a candle lit gothic castle listening to Scorpions (70’s and 80’s era), Accept and Necros Christos.

Twatsloch. Dude! You win the internet for me today I never thought I would see a reference to Accept on this site. Where is Udo Dirkschneider now I wonder? Metalheart!!!!

Udo still goes strong at 65 and just like Wenger he refuses to retire.

Fast as a Shark

Klopp and Bilic should form a band in their spare time.

Alex Oxlade Chamberlain by the numbers

Gaffer is spot on. We should have put them to the sword by 3 goals minimum first half with our invention. Poor end product. Either no conviction when shooting or just over complicated. Alexis was equally wasteful but you have to say the Chilean’s willingness to take players on is a double edge sword. He loses possession far too often but where would we be without the creativeness. that back heel assist was pure awareness. After a couple of tame attempts first half, glad to see the talented Iwobi finish that opportunity too. We will need to improve and start… Read more »

City got the business done (just) against Chelski but are without Aguero. Morata hobbled off too.

Hopefully the teams ahead one or two will drop points. We have Watford next, another team if we apply ourselves properly we can beat and hopefully chalk up some goals now.

City and United putting teams away by 4 goals, we can do that too.

City ‘just’ got it done against Chelsea? Are you insane? They annihilated them, at Stamford Bridge ffs.

I wonder what the narrative would have been if Ramsey’s shot or Lacazette’s follow-up went in.. I feel Arsenal dominated Chelsea to a similar standard that match.

Yeah I thought we were unlucky not to get the 3 points in that one I only remember the Pedro chance for them.

ManU to be fair have had an easy start to the season. No games yet vs the other top 6 sides, and a few of their games have been 1-0’s with 10 to go before scoring a few late to make them look good.
MANCity for me are the team to beat at this stage.

I agree we should have scored more. But this ought to be balanced with the ever-repeated attack on Arsenal of naivete, of chasing another goal rather than seeing the game out.

Absolutely. I’d take two fairly comfortable wins like that over an annihilation and a typically arsenal draw where we concede through throwing too many men forward.

Just goes to show how typically insightful the media are. Writing off Arsenal every season, championing Liverpuddle who haven’t won a title in a quarter century never mind finish consistently in top 4. Ronald Koeman was their latest Roberto Martinez, bright young manager suppose to be a genius like Klopp…struggling to keep Everton afloat at the bottom end. And now you hear some numpties wanting Ancelotti at Arsenal, never mind his age then. Conte was the must have just a season before who is now dropping off pace. Wenger has failed to deliver the big prize for a while now… Read more »

Sanchez tries too to hard to prove he is quality, most times it’s not working, it’s time to go back to the basics and play for the team

Can we Wilshere on next time, as a sub obviously

With Brighton’s tradition, history and the many dedicated fans I’ve met over the years I expected a team that would play football and could hold its own. What we got was a team clearly unable to create much who resorted to foul after foul. What a let down.

Lack of Perspective
Reply to  Twatsloch

Name says it all.

You thought Brighton put on a classy and mature performance?

I thought they worked hard & played some tidy football but there was (as you would expect) a gulf in class. I also think it was clear that they lacked a cutting edge going forward which is what you would expect from a side where none of their three senior strikers were available to start. (Murray came on as a sub but has been injured)
No idea why any Arsenal fan would feel the end to put the boot into them, it certainly isn’t classy or mature.

What I didn’t like was the constant shirt and arm pulling. I understand that was all they had left in the end but it’s not what I consider tidy football.

I don’t think their aim is to play tidy football to appease you. Gotta do what they can to make it difficult. I, for one couldn’t care less if we do that against city and the spuds. And who didn’t enjoy kolosinac and bellerins yellows against Chelsea. Not tidy football but bloody enjoyable.

No point stopping being childish at this point eh? Kinda sad.

Sorry that my opinion on Brighton’s playing style made you sad, Kwame.

Sad as in pathetic I meant…which of course you knew…..but as per your previous response to Jimbo Jones you’re trying (& failing) to be look witty cos you can’t handle anyone pointing out how childish your original post was.

While I made the effort to address you with some respect you met that with more patronising shite. When getting some of your own medicine you label me “sad and pathetic”. Is that your idea of not being childish?

Lacazette looked frustrated with the lack of service. We were, mostly, sluggish in the final third- not being decisive and incisive enough. More confidence in the box is needed- Sanchez assist being an example of what we need more of. I really think a fit Wilshere or motivated Ozil could be the solution. Just hoping the manager sees this sooner rather than later!

I think one of the main reasons why Alexis wanted to go to Man city is their tempo and ruthlessness. 2 nil is good, 6 nil is more of a statement. If we are going to beat the big boys and scare the living daylights out of our opposition, we should let them know that even if they give us half a chance we will score.

Lets not give them too much credit now. They have done that exactly consistently when?

True, but their intent and that of Klopp’s heavy metal tempo is what they are aiming for. Personally, I find that football exciting and scary to watch and this is why I wanted a manager like Tuchel to take helm. But then again, both City and Liverpool lack balance. That style of football has its drawbacks. I’m interested to see if City and Liverpool can maintain that tempo into next year. All I’m saying is that we need to be more efficient. Classical music football is good too.

Our season will be decided against the other top six clubs. We need to improve our record against them. I have no doubt we’ll win most other games.

The times we have bemoaned the fact we have gone chasing after unnecessary goals, losing shape and then conceding needlessly, either to drop points or give ourselves a nervous last 10 mins.

Given we are still building up from a ropey start to the season, 2-0, clean sheet, 3 points will do just fine.

Agreed. We’re playing so badly and set for relegation according to Spuds fans yet are just one point behind them. Citeh had a similar start to last season before ending up with no trophies. Manure are scoring goals but haven’t met the big teams yet.

Spuds will be behind us soon and unlike last year there will be a St Totteringhams Day. With my annoying, classless, not seldom racist, generally ignorant and kust plain thick spud boss in mind I hope that day arrives at the earliest possible moment.

What are they all looking at in the pic?