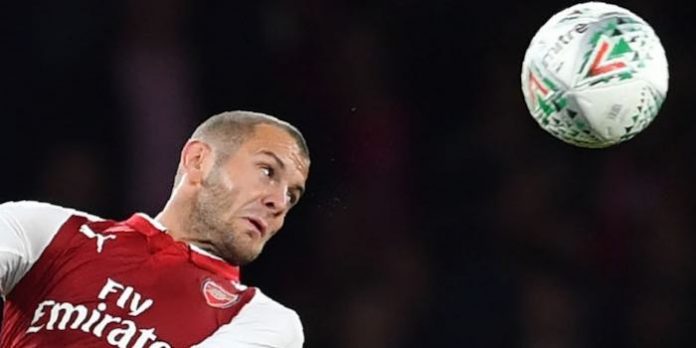 Jack Wilshere says his fitness levels are the best they’ve ever been, and that he needs really competitive football to get back to his best.

Having played two full games following his return from a broken leg, Arsene Wenger is easing the midfielder back into action, but the 25 year old sounds confident that his body can withstand the rigours of regular football.

Speaking to Arsenal Player, Wilshere said, “My fitness levels, if I’m honest, are probably the best they’ve ever been. I look at my numbers after the game and I’ve been out for four months and I’m not the one who hasn’t run the most.

“Now don’t get me wrong, I don’t run the most, we’ve got a lot of players that do that, but my numbers are good so I’m happy.”

As for finding form, he believes he’s got to face the best teams to rediscover his spark.

“I always hear the boss say it is my first five-metre burst, when I receive the ball and to get away from defenders and I feel that’s getting better and better each day,” he said.

“I feel like the way to improve that is in games when you’re playing against opposition that want to win and want to win the ball back and you have to be able to keep the ball.”

If he can stay fit, he can certainly offer something in midfield that we currently don’t have, so fingers crossed.

Wilshere: Ramsey would get into every top team in the Premier League

Sounding good. Hope he gets back to where he was, matures and goes beyond.

Me too. But he needs to stop making these statements. Wouldn’t want him to jinx himself….

lee dicks on
Reply to  C.B.

If anyone needs him, it’s England. That midfield is appalling.

NorthernGoon
Reply to  lee dicks on

They can get their mitts off him. When he’s played a season for us then maybe but until then MINE erm ours.

My man Jack!!!!! This is exciting news, Welbeck and Ozil will be back soon too so it’s great times ahead hopefully

Yeah man, do you know, with those three fit we could really mount a serious title challenge.

In other news I opened a porthole and I think it leads directly back to 2015.

With doubt a better option than Ramsey. Should be starting games now.

Not better but in addition to

Why not
Reply to  Martin

Kebab
Reply to  Why not

Agreed it is no coincidence Wales have done relatively well in recent tournaments. Ramsey and Bale make a difference.

Stay fit Jack and you will get playing time.

Really want him to make it here. Maybe the only midfielder we have at the moment, besides Cazorla, who specialises in keeping possesion. Has it ever considered anyone that our relativily bad defense, could be because we lose alot of balls in dangerous positions. I feel that someone like Wilshere could make that happen less.

Why not
Reply to  Assshavin

Trigger the alexis discussion…. yeah he loses it a lot but he makes up for it.

People only measure that argument on goals on one end of the pitch.

midgunner
Reply to  Why not

I was thinking of Xhaka not Sanchez.
Alexis is a striker and allowed to turnover play to some extent.
Xhaka’s sloppiness on the ball has put us in trouble numerous times this season already.

Someone like Wilshere goes into dangerous and often needless tackles that expose him to frequent ankle injuries. So long as he doesnt change his game and learn close control, he will never be like Santi.

I have a strong belief that Jack is going to be our saviour this season. Can’t wait to see him back regular

Would love to see him get run in there along side xhaka. Our midfield two are clearly not good enough and will get exposed in games and then get results in others. Cannot challenge for league titles without consistency.

xhaka, wilshere and ramsey in no. 10. really want to see that.

I have felt for quite a while that Ramsey could do really well in the 10 position. I still think with Ozil’s imminent departure, Xhaka, Wilshere and Ramsey in the 10 would be the best alternative.

Ramsey has 30 goals and 33 assists in 217 appearances. What makes you think he will do well there when he plays there anyway

The closest thing we have to Santi. I defiantly think he deserves a new contract.

He needs to pump himself full of Stem Cells and Growth.

I think he just gained one skill that he didn’t has before: maturity. May it continue!

Until he smashes his ankle again trying to dribble..

Until he smashes ankle again trying a silly out of control,over stretch dribble.

Sigh. I really hope he succeeds at this club. I really do. I hoped the same for poor ol Diaby too. I sincerely hope ot doesn’t turn out to be a similar fate for Jacky too. His game style draws in a lot of fouls and some PL players can really be rough with their tackles.

Case in point, if something like what Luiz did to Seo happens to Jacky, I honestly see another injury for him.

Just. Stay fit Jack. Make that #10 shirt proud to have your name on it.

Xhaka and Wilshere as a midfield two would be nightmare, I think. I think Jack could knock Xhaka out of the team, he’d be better next to Elneny or even Coq!

I miss the Coq.

He was fit at Bournemouth through last season.

he got a hairline leg fracture in April and was out the last batch of matches, But yes, he had a good run of fitness and appearances for the Cherries.

Everyone is dismissed and derided except Elneny, who you derided. So it’s pretty much everyone.

Must’ve killed you to say nice things about Elneny.

Lol was that really nice things said? I guess better then usual lol

We should always strive to get penetration straight up the vertical.

Horizontal penetration shouldn’t be neglected either.

My feeling on position is Ozil and Ramsey are really better higher up. In the link role, I’d like to see Iwobi or Jack. The deeper role is Granit or Coquelin, both very different. With Coquelin we will miss the deep passing range of Granit but gain more aggressive pressing. Coquelin may then benefit from Jack as a partner (or maybe not) but it will be a different type of midfield for us to use. Actually the one who seems best replicating Granit at the moment is Elneny as back up. Willock is still young so only when right opportunity… Read more »

I disagree with the point on Coquelin. If Coquelin plays in a deeper role, how can he press aggressively? You press from the front, not from further back. I think this is the reason that Coquelin seems to play further forward than he should do – he is being instructed to press because he’s good at it. That is all well and good until he wins it back and has to do something with it, which he’s not very good at. Pressing needs to be done by players that are good with the ball – it really only needs effort… Read more »

We just lost Mustafi for an extended period. He had be helped off the pitch by two medical staff in the 35th minute in their WCQ against Azerbaijan. Fucking shit…

Wouldn’t jack be better suited in the attacking midfield role than as a defensive midfielders. He is small, can dribble and can make key passes the ball. So in my opinion he is suited more upfront than back. I have the same opinion regarding Santi.

Be patient Jack. I actually think Arsene is handling Jack perfectly. We don’t want a repeat of Rosicky, Santi or god forbid another Diaby situation.