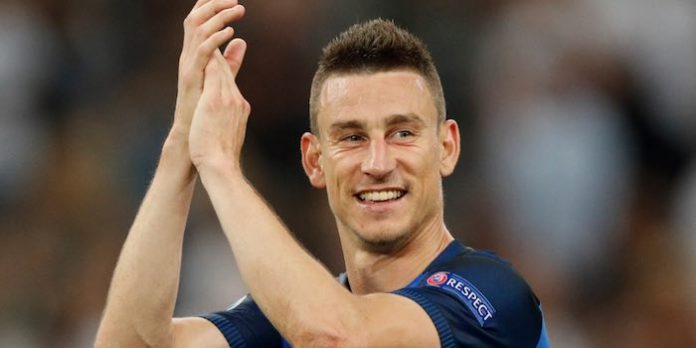 Laurent Koscielny has announced that he’ll retire from international football after the World Cup next summer.

The 32 year old has made 49 appearances for France, but has been dealing with a chronic Achilles tendon problem for some time now, something which has prompted his decision to call it quits for the national side.

Ahead of their friendly against Wales at the Parc des Princes on Friday, the Arsenal man said, “There is an end to everything. After the World Cup, I will be almost 33 years old, it will be time to leave.

“I have six months left in the French team to blossom and take as many memories as my wife would say.”

The then unknown Koscielny signed for Arsenal from Lorient in 2010 and has gone on to develop into one of the best central defenders in Europe.

He scored an equaliser in the 2014 FA Cup win against Hull, and has nabbed some vital goals for the Gunners down the years.

Hopefully this will help prolong his career at club level.

Great news, let’s keep him for ourselves! Excellent defender.

One of the best in the Prem and his decision making has improved so much from the rash and reckless defender we signed 6 years ago. Just a shame he’s never had a stable partner to build a partnership with. I still think Mert and Kos is the best we’ve had for years but Wenger has decided Mert doesn’t deserve it anymore despite the fact he gives more than 90% of our squad when he gets the nod.

The Mertescielny Axis was so good. RIP

I can’t think of a bad thing to say about this legend, I guess the biggest credit I can give him is in the two halves he lasted against Bayern last season we only conceded 1 goal, and when he was wrongly sent off and went off injured we conceded 9!!! That speaks volume about his abilities, class and leadership! Absolutely love this beast!

France would have lost a great defender for sure.

On the plus side, more Kosicielny is always good for us 🙂

A shame for France but good news for Arsenal!

I’ll get thumbed to shit for saying this but if he’d played under an actual coach he would’ve been a monster of a centre half, right up in the Adams/Keown/Ferdinand/Campbell/Vidic range

On the contrary, I thumb you up. He must rue the day our mediocre, blind, so-called manager picked him up from League 2.

And turned him into a world class player as he has done with so many others.

We were quick to get him. Kos is arguably our last classic Weber buy of buying an unknown and making him known and WC. Can’t think of any post Kos

However, it seems wrong to assume he would’ve just stayed there. As the likes of Kante and others have shown, our scouting is now behind.

Also he wasn’t in L2 when we got him, he was at Lorient, who were in L1 at the time.

The only thing that he doesn’t have that these guys had is a Premier League trophy. If Arsenal manage to win a PL title(LOL) with Kosiceny as the skipper, I don’t see any reason why he won’t be considered in the same breath as Vidic or even Adams or Campbell.
PS: Din’t know Keown was that good in his playing days. Aggressive sure, but didn’t think he was that good either

Could have Should have… Why not just be happy he’s a great centre back right now?

He is in their class and remember he was virtually unknown when Aw signed him. Why belittle him and Aw who has improved the careers of so many players starting with Henry.

Fuck me, time goes by fast.

It seems like yesterday when he was fresh young, and too nice a guy to be a top defender!

Time sure flies, I still remember his first match for us. He got tackled by Joe Cole and had an egg sized lump on his shin. Cole got red carded for his troubles and then Kos himself got send of for a second yellow late in the match. That must be one of the rare times when a player was on either end of sending offs in the same match.

My fav Arsenal player. As close to an old school loyalist as you can get these days. Always had a feel he’s more motivated by personal happiness in his family.

Shame we couldn’t provide for him the league titles he probably deserved. Situations like that, it does easy to see why some players get itchy feet. Could spend your pro career as a world class player and have little to show for it.

What’s this personal happiness in family you talk of? Can a pro footballer not have success both on and off the pitch? No player deserves trophies on his own, not even Messi. Otherwise , they would have just give handed him the world cup on a silver platter already.. I will remember Koscielny for the consummate pro and world class defender he has grown to become. You can deride Wenger for many things but one thing which often flies under the radar is how he plucked Kos (and Giroud) from obscurity and developed them into men, totally dedicated to the… Read more »

Kos has always spoken about being settled and happy with his family in London (note how he somehow still quotes his wife in his speech). He obviously had interest from bigger clubs, but he seemed content to stay. It’s also not unreasonable to be a world class player in an average team not winning anything and wanting to leave. I’m not talking about Arsenal in particular, just in general. I would say that Kos is our last real classic Wenger buy. League 2 Tours then one season at Lorient before we got him. We haven’t really unearthed a purchased gem… Read more »

Yes admittedly Wengers streak has gone dry in recent years – too many failed experiments of which the likes of Ox and Sanogo can be seen as the main culprits.

On the other hand, if Giroud doesn’t fit your bill, none of the below will. Whilst they may not exactly be world class (jury still out for most), I consider the following still to be very much positive products who significantly flourished under Wenger (and probably would neve have under cunts like Mourinho):

If that prolongs his career with us by another couple of years,by all means YES!
Might have lost a bit of pace and has fitness concerns, but still a top top defender.

Genuine world class player and lets not forget he was ranked alongside Thiago SIlva as the UCL’s best defender a couple of seasons ago.
And its a smart decision according to me, not unlike that of the BFG’s- to retire when they are still at the top

Lets hope he doesn’t retire from the club soon. He might go and manage some club and win league ahead of Wenger.

the story of him saving an accordion factory always brings a smile to my face.

It always bugged me whenever guys like sakho or Adel Rami were selected before Kos.

Certainly, he is one of our best signings. Would be nice for him to lift the World Cup, although, I don’t see France doing so, but you never know..

I love this man. Just wanted to put that out there.

Usually on this site their is a split opinion on players, after reading all the comments it appears he has at least a 95% approval rating which for me sums the guy up. For me I think we have had an issue where we have defenders where one is in their prime and the other is showing potential, that’s been our downfall the nearest we got was Mertesackers last good full season. When mustafi gets really good it will hopefully be next season or the season after, kos will most likely be done for, its unfortunate but he is clearly… Read more »

Imo the biggest issue with our CB pairing over the years (outside of lack of systemic organisation), has been Wenger’s absolute infatuation with having 2 similar CBs for whatever reason (probably to play his high risk, high line play) against all evidence that a balanced pairing works best. Gallas+Toure = When it began. Too similar, didn twork. Gallas+Verm = too similar, didn’t work. Verm+Kos = too similar, didn’t work. Kos+Mert = our best combo in years. Not perfect, but had balance. Should’ve been the template to improve on by getting a better version of a Mert type. Was abandoned by… Read more »

I don’t understand our Cback planning. We know Per is retiring. We know Koscielny has age related fitness issues. We SHOULD know Holding (despite what some may want to believe) is not full article. We should also know Calum is a Rback we are intent on trying to convert to Cback. We know Elneny tries but is not a Cback. Neither is Debuchy. Monreal is good but again not entirely a Cback and also aging. So why the hell did we sell Gabriel who was improving? And then try and Also sell Mustafi. Granted he isn’t the best Cback but… Read more »

Callum Chambers is not a RB lol he is a cb who can play rb.

Great news for the Arsenal. Hope he goes out in style and scores the game winner for France in the WC final!

When you talk about the core of the team, people talk about Alexis and Ozil. For me it has always been and it still is Koscielny and Santi Cazorla followed by BFG and HFB. These guys are proper Arsenal. Hopefully Ozil and Ramsey join the list. Can see Ozil staying with us but will be really surprised if Alexis extends his contract.