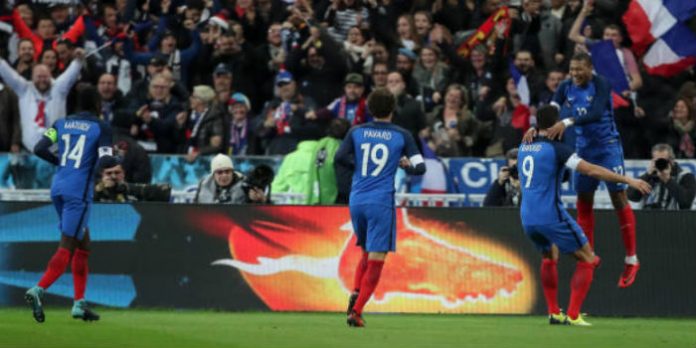 Olivier Giroud scored his 29th goal for France as they defeated Wales 2-0 in a friendly game in Paris.

On his 69th cap, the Arsenal striker, with the slight aid of a deflection, slotted home Kylian Mbappe’s pull-back on 71 minutes to double Les Bleus’ lead. With 15 goals in his last 22 appearances at international level, he’s now only five goals shy of becoming the third highest scorer for his country.

Once again Didier Deschamps opted to start Giroud alongside Antoine Griezmann and it was the Atletico man who broke the deadlock on 18 minutes with a neat volley. Alexandre Lacazette played the final 17 minutes as a replacement for his Gunner teammate.

Laurent Koscielny and Aaron Ramsey both played the full 90 minutes. Both appear to have come through the game unscathed.

Wales will Giroud that deflection.

As handsome as French bastards come.

World Class Striker?! Give him support and he will deliver!

The current French team is so good to watch. The system & the selection is spot on.

Imagine a new manager at Arsenal, who starts Giroud and Lacazette both up front together
Sometimes I get sick of watching Giroud play up alone in the holding role

It can happen even now pretty easily.
The three at the front of the 3-4-3 can play in a V shape with Giroud-Alexis or Giroud-Lacazette up front and either Ozil or Alexis just behind them in a free role that can come deep or drift wide
If only the manager tries…

Alexis would not pass or combine with Giroud. He did not in the few the played together. Lacazette and Giroud could work out really well. But we will never know.

Wenger will not try. He is Mr Know All.

Something is the matter with our Wenger when it comes to team selection.

Agree with you LB, but with our managers current team selections you are more likely to see a Giroud / Koscielny or Lacazette / Koscielny partnership up front than a Giroud and Lacazette.

We can play any formation with the squad we have. The biggest drawback is lack of discipline and bad positioning. The players try too hard to make it look like an ‘Arsenal goal’ with all the sideways passing. I think we miss Santi Cazorla BIG TIME. Players who are starting games week in week out like Sanchez, Ozil, Ramsey, Xhaka, Bellerin all have individual quality but they lack the football brain to orchestrate Wengerball. Barcelona at their best had Messi but they simply couldn’t have played the way they played without Xavi and Iniesta. Wengerball is impossible without WILSHERE and… Read more »

Precisely what pisses me off is that Wenger knows the importance of players such as Cazorla to the squad, yet he doesn’t want to get a replacement despite the long term and significant absence.
I agree, if I look back, I think the days we had Cazorla, at least I could say we played decent football going up front and unlocking opposition. The lack of creativity in midfield has been obvious since all of last season. Yet, Wenger and co refuse to address this issue.

Brilliant striker! If Arsenal would only supply him through out the game, he can and have been delivering!

What a squad the French have. Just looking at the strikers. Mbappe, Giroud, Lacazette, Greizmann. Always guaranteed to have 2 game changers on the bench.

A different George
Reply to  MrSweaty

And while still refusing to recall Benzema.

and… Dembele (2), Coman, Martial, Fekir,….
that’s too much…. I’m starting to be proud to be french again (till tonight rugby game!!)
just for the joke, Deschamp could play a “Wenger wing back side” like:
Spuds keeper
Coman – Varane – Kos – Umtiti – Martial
Kante – Lemar
Mbappe – Griezman – Lacazette
Giroud
….. and France would still have on the bench the likes of Fekir, Dembele, Rabiot, Pogba, bakayoko,….. :-0

A 12 player team! Victory is inevitable!

He is our only Olivier Giroud.