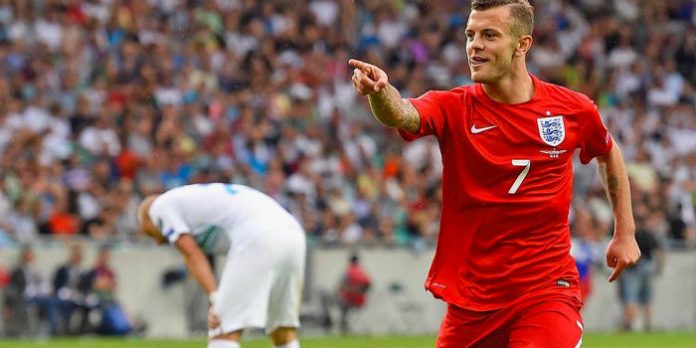 The 25-year-old hasn’t featured for the Three Lions since coming on as a substitute in the disastrous defeat to Iceland at EURO 2016 but has been touted as a possible solution to the lack of creativity in midfield.

Wilshere hasn’t yet featured in the Premier League this season but has impressed on starts in the Carabao Cup and Europa League. He’s due to get more game time tomorrow when the Gunners host Red Star Belgrade at the Emirates tomorrow night.

Speaking ahead of the game, Wenger said of Jack: “Personally, I think he’s ready. He was not three weeks ago but he is today. He’s ready. I have the same problem. He’s competitive. In every single competition, he’s ready to play. I would encourage him [Southgate] to do it.

“I can only repeat what I personally think: I don’t know how you can keep a super-fit Jack out of the England squad.

“I manage him like every single player. Since three weeks, he is treated like any other player.”

The key, as always with Jack, is his fitness. If he can avoid injuries in the coming months there’s a good chance his momentum could carry him to next summer’s World Cup. It’s a big ask at this stage…and we’ve certainly been here before, but it’s hard not to hope it comes off for him.

Arteta not optimistic on duo’s participation in Rome

Wenger must be worrying that if Wilshere doesn’t get a call up, he’ll leave for game time at another club.

Surprised Wenger is actually bugging Jack up. Well done to him. And must make Jack feel wanted.
At the same time, it is only a statement of the bleeding obvious given his competition for a central midfield birth consists of the usual complement of cross country runners in Henderson, Dier and Milner, each of which would struggle to find their arse with both hands let alone a forward on their own side in a good position with a pass.

Read it again before posting.

God, I admire you.

Up to your old tricks Paul?

Klopp talking up Ox for selection too. Wenger is not using him but want others to use him. Jack is miles better than Ox though.

He is using him. He’s playing regularly in Europe and in domestic cups.

jack should be in the first team, not the second….

well IF wenger thinks that much of him, why don’t he pick him for the first team…

He’s still the best midfielder England have got. Only an insane manager would’t select him if fully fit.

Ox: Coach, heard that Wilshere is ‘super fit’ & my ex boss jacking him up for England central role. Can u say something to the media? Some good things about me, some bombastic word so that Southgate will choose me?

Hahahahahaha. Don’t I just love that!!

I’d say Harry Winks is ahead of him after the performance he’s just put in tonight for that lot up the road I’m afraid.

Wilshere’s full of potential but he’s never consistently delivered on it and he’s got a lot of work to do, its been a long time since he’s set the world alight and he has not done anything against top drawer opposition for how many seasons? Wenger’s comment is as much about giving Jack confidence and looking ahead to life after Ozil and Sanchez I reckon.

Winks looks very good but to say Wilshere has never consistently delivered on his talent simply isn’t true. He had something like 8 consecutive MOTM performances for England the last time he was fit and got a run. That is exceptional. The only issue is fitness.

what a load of shit you are talking, you must be fucking blind, call yourself an arsenal fan, if your not blind you must be about two years old

34 caps for England and MOTM for 5 successive matches.

I agree, but still wonder why Wenger won’t start him in the PL squad. Surely the motivation for playing well in the crap tournaments is that you can break into the PL XI?

because wenger is a fucking idiot, he has lost the plot

well if he is super fit and in form why he cant get one start in pl even with the lesser teams like swensea? it is not like xhaka is in form of his life.

oe.why he can get mire the 5min as a sub for pl games.

when we are steuguling he is the only midfileder that can change the pace of the midfiels and go past 2 3 players.

i want to see him start a pl games.

Because he doesn’t play in Xhaka’s position (let’s not play the ‘he can play there’s game). Jack is being benched by Özil.

Yup, Ozil and Ramsey. Naturally they’re all a little different from one another but those are the two keeping him out for now.

And leave out Sead the destroyer? Hell na cuz

Wizardry – Kolasinac can still play in that system. The team can line up as;

One of our best defenders in recent years is Monreal…

That central midfield would be awful and catastrophically unbalanced. The only option in a 4-3-3 would be to play a DM behind Jack and Ramsey and push Ozil to wide right.

Or alternatively play a 4-2-3-1 with Ozil in the 10 and Jack wide right, which we’ve done before but doesn’t really work if you ask me.

Xhaka showed flashes of what he can do with those cross field balls to the wings (especially to Kolasinac) but he hasn’t been great since the season began. Jack isn’t a DM or one to sit in front of the defense though. I’d still rather have Xhaka then Coquelin or Elneny, those two couldn’t have played the passes he did to Kolasinac to open the play for our second goal at the weekend.

because wenger is an arsehole, who is deluded, who has lost the plot, who has dementia,in other words, he don’t have a clue as to what he is doing

sorry folks, but if you don’t think that’s true then you are all deluded, because its the truth

You are fully convinced that “its the truth” that he has dementia? Are you seriously claiming that this is a professional medical diagnosis?

Sorry folks but if you don’t think that the earth is flat then you are all deluded, because it’s the truth, is not a particularly convincing argument is it?

Your idiotic toxic comments are not just boring but sickening. Disrespectful and ignorant. Grow up or suppirtanother team

I like what Jack has done this season. Head-down, work hard and let his performances on the field do all the talking. Good option for the club especially with the home grown rules for european competitions

Should have done that last year

No, as unpopular as my comment probably is, he shouldn’t be selected for England until he is back in the Arsenal first 11 and performing in the league consistently. If he breaks down again, because of over playing then we’re at square one again. Calling him up would be the desperation of an bang average England team and it’s coach who are looking for a spark from someone. Wilshire is still potentially world class if he can manage his body. Arsenal need to see this consistently, not the bloody English national team in 2 pointless friendlies.

Our British Core has fizzled out, except for Ramsey. So hope Wilshere reignite his career with us and England.

Also hope youngsters like Nelson, AMN, Willock, Eddie use the opportunities provided by Wenger in the Cup competitions to step-up and push the senior players in the squad.

It’s been a while that Wenger has developed a superstar.

I think that is fair but for me he’s ‘on the verge’ with room to pick up his form and consistency at the moment. He hasn’t had one of those games where he really makes his presence known in a bit.

I love Bellerin but the unfortunate thing about our current system is that he’s much better suited to right back than wing back. He hasn’t really got the skill set to play as part of the midfield and is much better making those storming overlapping runs from deep. Still a quality prospect though.

Wenger hasn’t calling him up either

I’ve seen this one before – Wilshere get selected for an England squad for a friendly, Wilshere get injured playing playing 15mins of said friendly.

But if Wilshere plays for England, he will almost certainly end up getting banjaxed…normally in some pointless friendly (as is always the case) & then be subsequently out for months. AW should be careful what he wishes for.

Let him just play for the Gunners. Then at season end (or at leaat way past our traditional new year months of struggling with a team depleted by injury) he can go off & play for Queen & Country in a major competition.

Jack should be be walking into the current England team wrt the WC, even with game-time only in Europa and Cup matches. The current team still has one spot open in the midfield trio, with Lallana and Henderson the preferred starting 2(Sadly no England manager can see how overrated and ineffective Henderson really is). With Lallana and Jack playing as deep creative mids, Henderson can just run around aimlessly and try protect the back four. That’s the only thing he can do without looking laboured. And don’t get me started on Dier. ) The important thing is for Wilshere to… Read more »

Thank you “stuck on repeat”. Completely inappropriate for Jack to represent anyone except Arsenal at this time. Let the man get some game time and maybe even a couple of Prem matches under his belt before considering an International return. Remind me, but is this the same Jack Wilshere who has had several leg fractures already in his career, that we are talking about? The same one who was being nursed back playing under 23 matches only last month, to get a bit of game time? Jesus wept, what kind of mind games is Wenger up to here? Please tell… Read more »

Well, how can Arsenal not select a fit Wilshere?

How can Arsenal fans be moaning for Jack to be thrown into high paced Premier League games? We have seen that before, and it doesn’t end well! Wenger has nursed him back to full fitness (last 3 weeks treated as other fit players). Now he is built up we can think about integrating him into the 11 when needed.

Fully fit he gets in easily, one of the first names on the team sheet for any half decent manager (and I have my reservations about Southgate). But he needs to play in the prem for Arsenal

I’d rather he doesn’t play for England and stays fit for Arsenal.

A typically predictable snide remark. Jack has been scheduled for all the cup games, to build him up. What is wrong with that or can’t you understand that? It is going pretty well. So credit to Wenger for not throwing him into PL action and getting him injured.

so true, wenger don’t know if he is coming or going

I wish you were going Toxic moron

well if he,s that good, why the hell don’t you pick him for arsenal, you fucking stupid idiot

He came on last game…

The fact wilshere will play today is yet another managerial blunder I’m past caring about.

Xhaka should play to allow wilshere to dominate midfield on Sunday like we know he can.

Get Wenger out ffs he’s past it.

Southgate is a clown. But not selecting Jack is probably better for ARSENAL. 1 game a week is good for Jack at this stage of his come back. He’ll be disappointed but England might be too much football for him in a short period of time imo.
Still lots of time to make Russia 2018. Head up Jack and show that clown tonight what he’s missing.