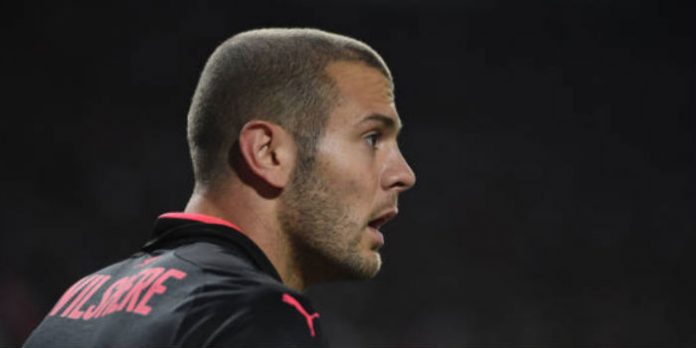 Arsene Wenger says he sees Jack Wilshere as a contender for one of the places in the front three more than a central midfielder these days.

The 25 year old is set to take up his place alongside Theo Walcott and Olivier Giroud for Thursday’s Europa League clash with Red Star Belgrade, with the manager also revealing his long-term future would be sorted out before the January transfer window.

Wilshere has less than 12 months to run on his current deal and in the past Wenger has said any new deal would be dependent on him proving his fitness.

“I said many times that would be decided in December,” he said of a new contract.

“I wanted to give him six months not to think about that and see where we go. Do we want to clear it up before the January window? Yes.”

As for his position in the side, the Frenchman now looks at him as attacking option rather than the deeper-lying midfield player he’s been most of his career.

“For me, Jack is in the position between wide and completely central, or in that area behind the midfield, because he turns the game forward well, he can chip a little ball and he can pass people on the short space.

“That’s why I think the system suits him well. He’s a little bit in conflict for a position with Ozil and Sanchez. I consider him as part of the front three.”

So, it seems those who hope Wilshere can add something to the centre of midfield will be disappointed, although he hasn’t completely ruled him out of playing there again.

Perhaps with more match fitness he could be considered there.

He’s a great midfielder and playmaker but his runs from deep are what have caused him so much injury. If Wenger can re-assign him a role that utitlises his movement and passing in the mould of Ozil then it can potentially offer him a longer career and more assists.

Assuming Jack agrees to re-sign, which is far from a foregone conclusion.

I feel confident that he’ll sign da ting given the opportunity to do so. He’s an Arsenal man through and through.
Then I still believe that Szczezny will run down his contact at Juventus and take over from Cech when he finally goes.
Maybe I’m just an optimist.

A different George
Reply to  PeteyB

Well, if he is really the successor to Buffon, I think he will stay there. But if Juve keep playing Buffon when he is 53 years old, Szcz may come home.

Exact, the only reason Wenger is saying this.

Wenger doesn’t want him as competition for ramsey.

The Paddy McNair tackle that broke his ankle was on the edge of the opposition penalty box.

Still, it’s true there’s bigger threat from all sides when he’s in the centre of the pitch

It makes sense, a lot of sense. Next player I would like to see moved up, behind the striker, is Ramsey. He just lacks the defensive discipline to play in midfield.

No chance. He’s one of the best box-to-box midfielders in the league. He’d be completely wasted playing behind the striker.

exactly, he is certainly not a play maker like ozil. I can only imagine what ramsey and kante would be like together.

With Alexis and Özil likely to go, it makes sense to have players ready to slot in up there. If Jack continues to do well there I hope he can just keep himself fit and he’ll be set for at least the next few years.

At the same time, I was eager to see Iwobi slot in. Both might be a bit too creative if used together up front. It would be good to have a solid finished who plays well off the team up front along with Lacazette.

Curious to see our team next September already.

How can you have too much creativity up front?

I think he means that they’re more creators than goal scorers, wanting the ball to feet instead of making dangerous off the ball runs etc

In other words, he’s Ozil’s replacement if he doesn’t sign. We should use him much deeper as we have enough options upfront. We need his ability to drive through and dictate play from deep.
Maybe Wenger has come to this conclusion in other to avoid further injuries as a CM.

But if Arsene is determined to use him in the front three, then, in all likelihood, he’s not going to get many chances in the PL before January (we also have Welbz and Iwobi competing in those positions), which makes it more likely (only Jack knows how likely) that he’ll get tired of not playing and push for a move, especially as he’s no doubt eager to get into the England team before the World Cup. And with less than a year on his contract, we’ll be stuck between selling him for money in January or letting him go for… Read more »

Exactly. If anything, this comment by Wenger will have Wilshere seriously considering his options.

Hogwash. His speed can’t keep up with anyone but Giroud. He is too slow to be compared with anyone but Per, whose positional intelligence discipline go a long way to cover for it. I would only start Jack if we want an injured starter (it will happen soon) or if we want to be embarrassed when he angrily buries his forehead in some defender’s belly button.

Giving you a thumbs up for using the word hogwash. I love that word!

Loool I agree he isn’t as quick as Ozil (who contrary to what people think covers alot of ground) and let’s be honest – not as creative. Jack is a downgrade on Mesut tbh. I hope Ozil stays and Wenger plays Jack as a CM

Id rather have Jack on the pitch giving 100% every game than the passenger that is Ozil.

It is not December yet

Next headline “Wenger to consider Giroud in goal”

Aha Scorpian kicks from a goalkeeper.

A different George
Reply to  Badaab

Wenger’s comments does not bode well for Jack. He’s a totally different player from Ozil, Sanchez, Ramsey and probably closer to a Santi mould but our current formation doesn’t allow either to easily fit in…basically a square peg in a round Arsenal size hole right now.

Or if Wenger switches to a three in midfield, which we need anyway.

I think Ramsey and wilshere have put in a decent effort to show they want to be guranteed starters in the squad.

Not sure they are just yet but it’d becoming clearer that there’s little room for keeping Walcott and others of that ilk happy.

Considering we have welbeck cazorla Sanchez ozil Ramsey xhaka coq Elneny iwobi wilshere Walcott and the youth player all going for 4 positions it’s clear we can afford to cut at least 4 of them off the wage bill and invest in somebody quality wise to properly shield the defence like khedira.

The Khedira ship sailed about four summers ago. But I agree in the longterm we probably need another deep-lying midfielder. I’d still prefer to see Jack in midfield rather than in the front three.

But we also need options in the deep end of midfield.

Perhaps we can try Iwobi there if Jack goes forward.

The young lad has plenty of power, quick feet and an eye for the through pass.

Personally, the player who should really be playing higher is Ramsey.

Jack’s game shows a lot more maturity these days and you’d think he will be more trusted to maintain awareness in the deeper role.

We still haven’t entirely ironed out our midfield conundrum.

Eh, the reason Ramsey gets in so many good positions is because he is coming from deep, when he plays more advanced he gets less space to work in.

Something magical happens when Wilshire and giroud play together ! Another goal of the season Im hoping

Ponsonby Gooner
Reply to  Am a gunner

Apparently they’re good friends off the pitch, which can’t be said for all our players at the moment as I understand it.

Pity, i was hoping to see him in Xhaka’s position. But he can also add sharpness to the attack. Jack and Iwobi might be the future duo alongside the striker

I see Wilshire as a direct contender for a place with Xhaka. Contrary to what a lot of people say, I think Wilshire and Ramsey can play together and well (I remember a rare 1-0 win at home to Man U in their early years), they’ve just barely ever had the chance due to long term injuries down the years. His 8 man of the match performances in a row for England all came from the deep lying playmaker position. I can even see him alongside Coquelin with Ramsey ahead of them in the absence of Ozil. Jack’s finesse with… Read more »

Think Jack’s ideal place in the squad is exactly what he has now – one of the key members of the second string, who can step in if he’s fit and a first team berth is free, but rotate back out again when one of the first choices is back. I think he would have to have a lot longer injury free stretch before we could count on him being a key man in the first team. The question I guess is whether he is happy with that role.

I find it baffling how he quick everyone is to assume he can be our saviour. I man I get it, it’s a bright spot in a dark time, but seriously, how can you put so much hope in a guy who will barely last 30 games a season?

I know less about him than Wenger, but I think he’d be bloody marvellous sat between the defence and the midfield. He did it with England really well

Jack to renew contact in Jan, and gradually transition into a front three starter by next season when Sanchez/Ozil move on.