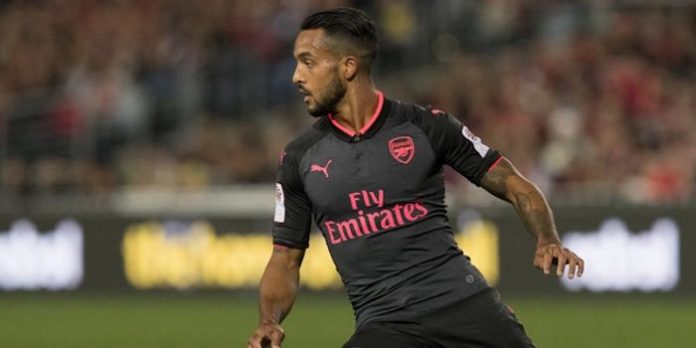 Arsene Wenger is adamant that Theo Walcott will remain an Arsenal player in January despite suggestions the England international could leave the Emirates in search of regular first team football.

The winger hasn’t made a single start in the Premier League so far this season and has been linked with the likes of Everton and West Ham in recent weeks.

The 28-year-old has recovered from an illness and is in line to feature against BATE Borisov tomorrow night, his first appearance since early November.

“Yes [he will play tomorrow],” said Wenger in his pre-game press conference.

“He works very hard to come back into it. He was sick. He had a sickness a few weeks ago and after I didn’t change the squad.

“Overall, in training he looks very sharp and I’m sure we’ll see that tomorrow [against BATE Borisov].”

Asked if Theo will still be a Gunner come the close of the next transfer window, he replied, “Yes.”

What the boss says in public on this matter and what he’s saying to Walcott in private are likely to be quite different. Having flirted with a departure in the past, it does feel like Theo’s time at Arsenal is slowly coming to an end.

He really needs to kick-start his career and you can’t help but think a new environment will help that.

Bellerin: Everyone is sad for the boss

Please move Theo on. Seems like a really good guy, but I think his wages could be put to better use.

You’re probably right.
I suspect that Arsene is referring to the fact that Theo will take a massive pay cut to move elsewhere before his contact’s up only if hell freezes over.

but who would pay his wages? Everton maybe…they have a ton of slow forwards.

He will see out his contract and move for a nice signing on fee, mark my words

TW14 is a busted flush. His agent held us to ransom twice when he wasn’t even that good.

He has been found out to have a poor football brain and no stomach for proper action.Playing him and Ozil in the same team was always a problem regarding competitive play. Bellerin was always being exposed.

I hope he takes a transfer because if he stays it will be only because of his extortionate salary he is unlikely to get elsewhere.

I quite like Theo. I always thought he’d develop into a 20-a-season PL striker, and he does show glimpses of real talent from time to time. The problem this season seems to be this 3-4-2-1 system; where does he play?

Given that he’s apparently collecting £140k per week and not starting games he’s surely either got to be prepared to accept reduced wages and squad status or move on.

If he does move on, I’ll wish him all the best.

Gibbs, Jack, Theo, Ramsey, Jenkinson Ox I’m sure Wenger believed he had found a group that would be at the club spearheading the trophy hunt for years to come….hmmmmm. Ramsey is the only one he actually rates and he hasn’t really improved as everyone would had hoped. Unfortunate.

Lost a bit of pace, still a good finisher, never brought any off field issues to the club but he needs a fresh start at a new club. I think his salary could be an issue as far as the transfer fee and what we can expect.

The reality of that deal is that we’d bank about £8m max. Still, I’d take it and invest elsewhere

10 goals last season despite missing the last 10 matches. Let’s see how he plays v BATE and hope he is back to sharpness. If he isn’t making the effort then sell him. I’d rather he stayed, plays well and gives us another option.

It is not a question of effort.
He just does not fit into the way Arsenal plays and the ambitions that (at least we think) the club has.
He doesn’t work as an off the bench second option either. Most importantly though, him being in the squad holds up new talent.

This, especially the last sentence.

I personally think its effort. How many times do we complain about the lack of tracking back from him? He is inconsistent for a player that isn’t a lock down starter.

Yes I agree its time to move on because he does block other younger players from gaining experience in games against BATE.

I don’t buy that at all. No one scores over 100 goals for Arsenal without having tremendous work ethic.

When it comes to Theo, I do believe Arsene is telling the truth. I mean, how many times haven’t we been talking about Walcott and that he probobly will move on the next window, yet still he’s here. It does feel like Arsene does have a hard time of letting him go, given how much time he spent on developing him.

Theo developed?
What? When? Dammit.. I knew I shouldn’t have gone to the bathroom

You don’t want to sell a player at a low price.

Preferably he puts in some convincing performance to suggest he is worth more in market.

You also don’t want to publicly state he is surplus to use. Again it affects price.

The other issue is if anyone wants Theo in the first place.

I think it’s best to keep Walcott for now. We can’t really afford to lose him alongside Sanchez and Ozil, should they leave during the winter window, unless we have an upgrade lined up.

We totally can. In fact considering that Ozil and Sanchez are first team starters who will need replacing and will not be bringing any cash from their departures we desperately need to bring in some money for players who are not good enough to replace them in the first team. Example: Theo Walcott.

This is even more true now thathwe are out of contention for the title. We do not necessarily need them to make T4 or win the cups or Europa.

“Them”? If we lost Ozil and Alexis during the Jan window without replacements that are equal to them or at least one of them then I would think it would be hard to make top 7.

this theo things sums up what wenger has become. from a top top quality manager to one happy to hold on to average players and refuses to acknowledge his mistakes.in another big club our limited theo would have been shifted years ago.

It’s in the best interest of the club and player if he moves elsewhere.

Isn’t take the money if it were to get Mahrez….even with the blond hair!

Theo and Laca running behind defence should be dreadful to lot of teams.

Sort of doesn’t seem to hugely matter if Theo stays or goes in January. He’ll help the Europa league team a fair bit by staying… perhaps like other players who are at the end of their Arsenal careers like Debuchy and Elneny, he’ll be a player that you could keep in the team towards the latter stages of the competition meaning a rest for some first teamers.

First time I would hear it being said that a 28 year old footballer needed to kickstart his career.

Theo should probably move on, the new formation doesn’t suit him. Its a shame we never saw him play much as a CF with Giroud. Could have been an interesting partnership…

I’ve always liked Theo.. Sane arriving at the EPL however exposes Theo’s lack of growth. Theo should be what Sane is and more. I’m sorry #leaves without getting coat

The difference I see every team I in eutooe wanted sane. Man City out bid. You may want us to replace Walcott with a winger every team in Europe wants and other teams spend more money than us. Why is he gonna join us .

Obviously what Wenger says in public is different to what is going on behind the scenes.

Wages might be a problem but in certain areas we have too many players and we are not balanced.

I would like to see a couple of young up and coming full backs recruited in January, we are short at wing back if we rest Bellerin & Kolasinac.

Theo Walcott, decent bloke but I just don’t get how he has stayed at the club for so long and is being paid a fucking fortune! He is indicative of where we are really at as a football club and that’s behind the very best! No other top team in Europe would indulge in this failed experiment for so long!! If you feel he has a future at the club or are going to defend his record then you are accepting mediocrity and that is not what this club should be about! It’s not just our history and the size… Read more »

Come back to the five \'n\' dime NickyB NickyB

Walcott, if given games, gets you 15-20 goals per season. And goals are the only real currency that matter.

However, just like Wenger, there’s been a tipping-point with regards to Walcott and the fans affection for him. Sadly, I don’t believe there is any way back for him.

However, at 140k per week, you (the fans) can all fuck right off! I’d run my contract down and go for a lucrative free – thank you very much!