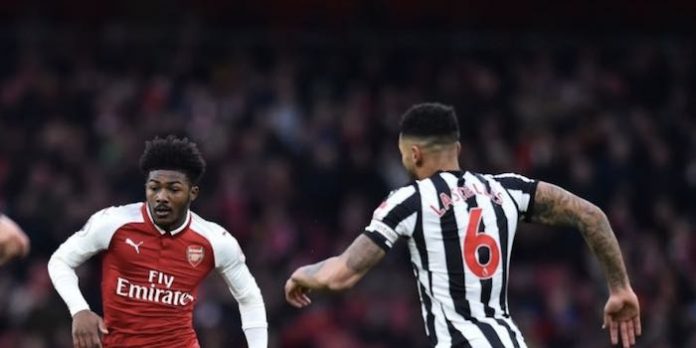 Arsene Wenger has hailed Ainsley Maitland-Niles as a big part of Arsenal’s future after another impressive performance from the youngster today.

The 20 year old, making just his second Premier League start, was asked to play at left-back again and not only did he defend well, he contributed in the final third too.

One particular run and shot was a rare moment of excitement and invention in a game that had little to get fans off their feet apart from Mesut Ozil’s amazing goal (view here).

Speaking after the game, the Arsenal manager was happy to sing the praises Maitland-Niles.

“I believe he is the future,” he said.

“He can play left-back, right-back, midfield. Of the three positions maybe the less natural for him is left-back but he adapts very quickly and is a good defender, you know?

“He has some aspects to learn on his experience. He has to work on his heading but overall what he has done over the last three days is positive.”

It begs the question, if he’s so highly rated and playing so well in a position which is not his natural one, why not give him a go in midfield where we do have issues at the moment and where Wenger says is his best position?

Maitland-Niles: Arteta demanded more from me

Let him build up to midfield. The experience he is gaining will stand him in great stead.

I think Pedant answers Blogs’s question: as much as I want to see him in midfield too, there are definitely aspects of his game where he just looks a bit inexperienced, and central midfield is probably the one area of the pitch where inexperience is most likely to get exposed.

Kwame Ampadu Down
Reply to  PFo

But on the other hand we’re exposed in central midfield regardless of which of our other options we pick. Is inexperience more damaging than a lack of balance (which we get with Xhaka/Jack or Xhaka/Rambo) or a lack of quality ? (which we get with Elneny or Coq)
Sad thing is we’ve been having this debate about our midfield for what seems like forever….

caligunner
Reply to  Kwame Ampadu Down

I know its sad to say this but I would rather a kill Xhaka, Jack, Rambo, Elneny, Coq for fucking up because they are older and should know better then AMN making the same mistake. Making a mistake in the middle is less forgivable then making it on the flank?

BidOnLard
Reply to  Kwame Ampadu Down

A few badly punished mistakes at top level can be devastating for a young player – see Chambers and Holding. Both were good and very promising but lost self esteem after few not ao good games. I hope they can recover but exposing players in central positions is risky.

Agreed, but a midfield with Jack and AMN is a tempting thought. Could building up their understanding of each other’s game be the reason for Jack’s seemingly late return?

Get outta here with you devastating reasonableness

Well first some people say that our wing backs are too much in comfort zone. Now we have a youngster playing out of position taking their place. Isn’t this taking the 1st choice players out of their comfort zones, no?

True. Think most people believe Bellerin should be the one to be dropped though, not Kola (even though he’s been pretty bad the last couple of games). Bellerin hasn’t been himself all season.

A Different George
Reply to  bendtnerschristmastree

Everyone says it takes time to get used to the Premier League, because of its pace, its physicality, its schedule with few easy matches. A player like Kolasinac seems to fit in immediately and we forget all about adjustment. Then, when he has an almost inevitable downturn in form, we are surprised. If he were still in the Bundesliga, he would be beginning his winter break now. I think Wenger is more aware of these sorts of things than most Arsenal fans.

He should be the present…for Bellerin.

He could replace Xhaka in the midfield! Just a thought..you know!

I really don’t get why Xhaka is placed in the same bracket as other DMs. He isn’t one. Yes, he needs to work on aspects of his game and he’s going through a bad patch, but his distribution is better than any other midfielder we have in that position. Based on his life experiences, he seems humble enough to want to improve and I hope he will. He’s one for the future.

His ball distribution is wonderful. A point that I would certainly agree upon. But him.. giving the ball away way too many number of times is simply not acceptable. He almost lost us the match today at the 80th – 90 th minute by giving the ball away a couple of times. A crucial point of the match, when he should have been shielding the ball for us. It was not the first time and it has almost become a regular occurrence now (worryingly). Is it about concentration? A temperamental issue perhaps? Whatever it is.. he definitely is in need… Read more »

I think RWB will be his best position where he can use his pace, defensive and offensive attributes. He could be a good second option to bellerin and potentially offers a little more going forward

Ox in the Box

I know everybody wants to put him in midfield but he is not ready for it – he can struggle with his concentration and his passing can be wayward. He is obviously the future in that position but trust Wenger on this one – Arsenal midfield is a high pressure position because all the teams press the two central midfielders – never the defenders – and this makes bringing out the ball very difficult. Maitland-Niles would struggle even more than Xhaka and there is no point putting him in and watch his confidence go down after a couple of lost… Read more »

Mpls
Reply to  Ox in the Box

This is where I’m at. He’ll be there, just not yet for PL starts when we sorely need a win. Some sub appearances if necessary, cup matches, build him up there because at the Arsenal that is the position of most scrutiny. We’ve got some squad depth now so we don’t have to wreck them young anymore, and it does require that next level of composure and metronomic consistency he’s got to work into.

How dare you use logic to question the manager’s decisions!

We need to get better defensively as well as going forward.

Debuchy at RB Kos/Mustafi/Monreal/Kolasinac combo of 3

Now, we’d have an actual DM (AMN) in midfield and an actual defender on the RB

in other words, we need new players

I think people underrate just how comfortable he is on the ball. That’s what has impressed me the most. He probably will be our future DM. He’s def a better passer than Coquelin.

That would be great if only Wenger actually deployed a DM…

Let’s hope he stays grounded, keeps learning, and doesn’t start believing in his own hype. He has all the attributes to become an excellent player for us

Would like to see him in C/M for West Ham.

We won a game. All dissent will be quashed

Wenger has mentioned AMN versatility to play in 3 different positions and plays him in the least favoured.

It’s not like the players playing in the other 2 positions are setting the world alight.

Sigh, it’s so tedious with Wenger and this team currently.

Kola is worse then Bellerin right now. Only other LB to cover Kola is Nacho but AW prefers him at CB right now.

To be honest this is where I have a little beef. Don’t get me wrong it’s been nice seeing AMN, but Chambers and Holding must be frustrated. It would seem more logical if Kola is needing dropped to put one of them into CB and slide Nachoman out to the left.
Perhaps Wenger doesnt feel nacho has the legs anymore.

lol, wenger nor the players aint got a clue what he wants to do, that’s why we are in so much shit

“He can play left-back, right-back, midfield. Of the three positions maybe the less natural for him is left-back but he adapts very quickly and is a good defender, you know?

Wenger can u stop this already? U can’t get your gamble right every time. What if AMN not able to perform and cost us the game? Will hurt his and the team’s moral too.

Why Not
Reply to  Ivan Parasite

Have been very impressed with him in his appearances this season, very calm and composed and certainly adds some good quickness and strength to the outside positions he’s been playing (wingback or defender). Would like to see him given some chances at def mid, but probably won’t happen until next season.

he is a dm. play him there. i think he looks really promising. why not give him a chance there in the carabao?

Not too start in my view…..but the manager could have brought on Kolasinac at LB for Xhaka and moved AMN into midfield? Would have shored us up at a time when we were coming perilously close to throwing 2 points away…..against a really, really poor Newcastle side? But – sadly – that would have not fitted with the old man’s substitution by rote policy 🙁

A XI without Sanchez / Ozil giving the performing players a chance. 3-4-1-2 Cech; Koscielny, Mustafi, Monreal; Bellerin, Ramsey, Maitland-Niles, Kolasinac; Wilshere; Lacazette, Giroud. I believe Giroud can play well up front with Lacazette. Holding the ball and passing smoothly to Alexandre. Maitland Niles could well be the CM who can stay back and conduct as well be physically dominating and do what Xhaka has not done in the desired state. Especially that Ramsey is going to run his lungs. Drawbacks: This assumes no players replacing Sanchez and Ozil but can ensure Reiss Nelson can move his way in. Also… Read more »

What about the present.. enough about the future now.

Time to give a Maitland-Niles / Wilshere centre midfield a fair shot!

the kid is good just like nelson play those kids in their positions ;wenger did not hesitate when it was cesc or jack or ramsey at the same age or younger. and it’s not like we are going to win the league this year anyway or be in the title race. and i honestly don’t see niles being unfazed against mid and lower tables teams. he can be benched against a top six team. he is already pl level. our manager has lost his mojo !

Generally when developing players and adapting them to the pace and intensity of the premier league, you put central players out wide, where mistakes can be recovered in the second phase. Can you imagine the stick he would get, considering how much flak our other midfielders have taken even after a period of form. We need to be patient with players especially our own coming up from the youth team, then perhaps the manager can play them without fear of the player getting unfairly judged or criticised. Ramsey got alot of flak at a similar age. And it wasn’t until… Read more »

It seems we are getting a balance of young prospects and experienced talent back again.

But what does it mean?