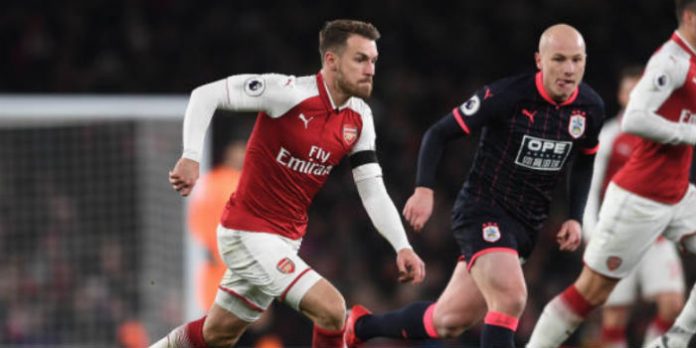 Arsene Wenger says Aaron Ramsey is running again after picking up a hamstring injury at Southampton but the Wales international won’t play a part in any of Arsenal’s festive fixtures.

The 26-year-old pulled up late at Saint Mary’s and has already missed matches with West Ham and Newcastle.

He wasn’t expected to be part of the squad for tomorrow evening’s Carabao Cup clash with the Hammers but it is a blow that he can’t be called upon for Friday’s game with Liverpool and the tricky trips to Crystal Palace and West Brom.

“Ramsey was out running [on Monday] but he will not be back in the next 10 days,” Wenger told Arsenal.com. “For him, the beginning of January is more likely.”

In more positive news, Shkodran Mustafi is available after limping off in the defeat to Manchester United. As is Theo Walcott, who’ll likely start tomorrow.

“Shkodran is back again. I will not use him on Tuesday but he’s available again.

Wenger also touched on his rotation policy for the next few weeks, making clear that he’ll have to rest some players who are teetering on the fabled ‘red zone’.

“Some players are a little bit on the edge,” he said.

“I think as well that we have so many quality players who did not start on Saturday, so you cannot say that you prefer to play a player who has played three games in six days to a guy who is at the same level and is completely fresh.

“The players who will start are basically all international players, so that’s why I think [squad rotation] makes sense.

“You have as well to show the trust and the confidence that we have in the players who did not start last week.”

“We will make decisions in the next three days” – Arteta on Nelson, AMN & Mustafi

Time for AMN to start in midfield alongside Jack!

Alongside Özil… Mesut took the “Cazorla position” against Newcastle while Wilshere was more up front.

I think there was more to it than that, Mesut often dropped deep to collect the ball, but I think it was more out of midfield freedom and Jacks creative role. if Wenger gives Jack licence to go forward that must give Mesut the licence to come back. in our recent games we have had teams pinned forwards, if the players stayed in the same positions we cant break teams down, so a lot of movement is needed in the final 3rd. this is why I feel so many bemoaned the Giroud/Lacazette sub at the weekend. It’s also why Welbeck… Read more »

In that game i think we should have played both giroud and laca up top to give us variety in attack. Drop Alexis.

I think there is no define rule for the players around Granit. Both Jack or Iwobi and Ozil can rotate back to partner Granit or swap turns to attack the box. This role (which Ramsey played) linking is the one open to the most interpretation in the team and is therefore the most difficult to master (to give credit to Rambo) Thereby someone like Ozil and his experience is better equip to know when to push forward and make up numbers or drop back in caution. It’s actually more akin to what Wenger did with Arteta. He was more forward… Read more »

No, unlike when we had Cazorla in the team, we’re not playing a standard 4-2-3-1 with two central midfielders and a number 10 well ahead of them; rather, we’re playing a 4-3-3, with Ozil and Jack positioned roughly either side of Xhaka who’s deepest, so the fact that Mesut was dictating things by coming deep was more just about him taking the initiative, rather than it implying that Jack was playing much further forward as a 10.

I don’t think so. Seems AMN is part now of the first XI
🙂

Don’t worry, AMN will play. Instead of trophies Wenger will prove he develops players. Happy for the young boy. He is good.

AMN is the MAN.

Solid player, unassuming, calm on the ball, slot in wherever you require him.

We are short on options at Lback but also midfield.

A bit more risky in midfield. Lback is a bit alien to him but he has grasp the opportunity well and gives us an added option.

I’d give Willock the start and save Jack for friday.

Oh and I also forgot Coquelin. That’s 8 in and around the first team.

Amn is not good enough for arsenal. This is why we crap h ppl dont get it. We need world class talent. A guy like ika gudogan or arda turan. Even emre can another option

Not sure about Emre Can, but it would be hilarious to sign what is a very decent player for free from the mugsmashers.

Oh right, academy players can’t become world class.
I’m sure the likes of Turan (what does a 30 year old AM got to do with a 20 year old DM?) and Gudogan just magically appeared and existed into the world at the age of 25 with no previous academy games at all.

Why not
Reply to  Mpls

He must go play for crystal palace or some shitty team. Amn is not gunner material. Liverpool gonna f us up because of that crap

And we have a mugsmasher troll in our midst.
I can’t fathom any other explanation.

….this guy has to be a Spurs fan! Either that or we have just witnessed the greatest stupidity of all time….in the words of Andy Gray “take a bow son, take a bow”!!!

‚Nothing serious, a minor hamstring.’

There was a time when all these ‘Player X out until…” got me very upset because I thought the injuries were the reason for Arsenal under-performing and the only obstacle for our success on the pitch. Not anymore.
Speedy recovery to Ramsey but with or without him Arsenal will be just the same: average.

So, I’ll ask again, why doesn’t he say ‘I don’t know how long he’ll be out’ or it’s ‘probably 1 to 5 matches’ rather than say it’ll be a short time then extend it and make everyone think we don’t know what we are doing?

People are not machines. Can’t predict how their tissues would heal.

Agreed. Yet Arsene says ‘they will be back for the …. game’ so *is* predicting a return. Then the player doesn’t return and Arsenal look silly and we feel disappointed.

Hence better to say a longer period of time and then pleasantly surprise us.

As he did with Laça & Ozil very recently

Why not
Reply to  MagicMesut

How dare you point out stupid facts that disprove the current rhetoric!

Normally I would say this is being too harsh, but after reading the Guardian’s interview with Isaac Hayden yesterday, I’m not sure anymore.

Two things of interest to me are;
1. Wenger’s somewhat Ad Hoc approach to tactics compared to Benitez (nothing we haven’t heard before really)
2. The medical team getting him to train on his ankle without even a scan. I know it was about 2-3 years ago, but even then that should never be happening. That’s pretty shocking.

Thanks for the link. What a great article

Answers so many of the suspicions behind the scenes. How incredibly amateur we really are

That interview was a real eye opener as far as our medical team, and I’m not prepared to let them off the hook over Santis situation either. I agree with those who have said that bacterial infections happen, but I can’t reconcile the fact that Santi was told over and over that it was OK to play when it clearly wasn’t, and some idiot managed eight operations without realising there was a huge infection and Santi had gangrene. To then tell him he should be grateful if he can play with his kids is a total disgrace. If the club… Read more »

We really dont know what we’re doing in the physio/ medical department.

We need Jack for Friday so Id rest him

We have been good this year with injuries. Having almost the entire squad available. But the hayden story on guardian really makes one question the medical team at Arsenal. Ramsey grew frustrated with the same problem recurring again and again we had that article here last year. Shame its the same injury again. I hope mesut never enter the medical room , might never get out.

Hopefully by missing the Xmas games he’ll be around from Jan onwards and won’t brake down again also please don’t tell us all about how fit your feeling next time.

If Ramsey were to leave the club you couldn’t blame him whatsoever. Every year like clockwork he gets overplayed and breaks down physically. Chris Coleman is hardly likeable but he’s right to ask what the hell are we doing with Ramsey. He gets injured fifteen minutes after Wenger takes off Xhaka for Wilshere. Xhaka, who is a Clydesdale, and never breaks down. Leaves the thoroughbred in the pitch and no one is surprised when something pops. Just maddening.

It shouldn’t but it does.
As someone who worked as a sports scientist for a PL London club (sadly, not Arsenal, though I tried), it’s not that simple. 1-game a week but also factor in his training sessions, managing his acute-chronic loads, but most important of all….his previous injury risk.

It’s really hard to predict or manage injury risks, but….it’s not a coincidence either.

That’s bad news. Obviously, there’s no one to blame, but it just saddens and pisses me off. Get well soon Rambo.

For Wenger, all players are at same level. Why doesn’t he pay them the same amount of money then?

He’s tried that one already!

We screwed. Ull will see now how much rambo meant to arsenal. We going to drop alot of points

“Ramsey was out running [on Monday] but he will not be back in the next 10 days,” Wenger told Arsenal.com

Must be a very long run then.

I’ll get my coat.

I agree he needs to keep playing a balanced game, but the cold truth is his extra man into the box upsets the balance of defending opponents and adds a big dose of chaos to their job. You could see that missing in the last two matches.

Jack, Ozil, or a wide player needs to make up for that missing unpredictability or we’re too static.

Am i the only one still thinking a Jack/ Ram axis is workable? Provided we have a solid anchorman.
3 at the back, wing backs, anchorman, jack/ ram in CM with freedom to bomb forward. Mesut behind laca.

Opportunity for Iwobi or Jack in. That said…

Hope Ramsey is on the mend and no unexpected extension to his return. All hands on deck.

Everyone knew when he was first injured and Wenger said “it’s just a matter of days” that it would be weeks. Ramsey certainly has issues each year with his hamstrings and cannot be counted on to stay healthy throughout the year.