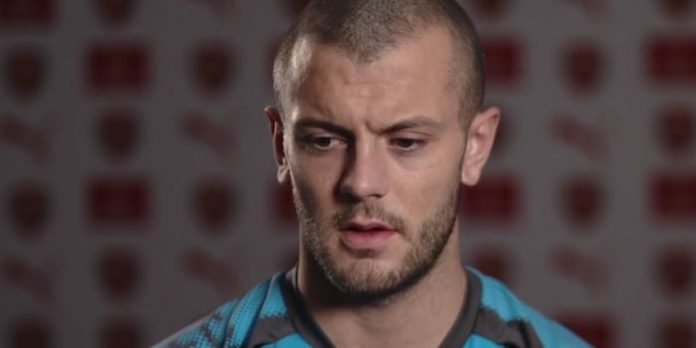 Jack Wilshere says he wants to stay and sign a new deal with Arsenal, but acknowledges that the decision is one the club have to make.

Arsene Wenger has promised talks before the end of the month, and having worked his way back into the squad for the Premier League, the 25 year old has reiterated his desire to stay with the club and sign a new deal.

Speaking to Sky Sports, he said, “I said it before, before I even played in the Premier League this is where I want to be. This is where I see myself in the future.

“Whether things sort themselves out in the next few weeks we’ll see I suppose.

“I definitely want to be, there, I’m enjoying my football and I want to help Arsenal get to where it should be.

We just have to sort things out, and I’m sure that will happen in the next couple of weeks and that’ll be sorted.

“I think the biggest thing for any footballer and especially for me because of the injuries and the games I’ve missed, is that you’re playing.

“Apart from that there’s small things to sort out, but as long as I’m playing I’m happy. I just want to be playing.”

With the World Cup on the horizon, Wilshere was asked if he was thinking about getting the nod from Gareth Southgate for his international return.

“I think I’ve proved yo myself I can play in the Premier League,” he said.

“I trust my body, and I think I can affect games.

“That’s all I can do, have a positive effect on this team and we’ll see if the England manager picks me.”

Wilshere is likely to be in the team to face Liverpool on Friday night.

Wilshere: Ramsey would get into every top team in the Premier League

Arsenal hit by player who wants to stay bombshell.

Its a no brainer, give him a contract

Doubt Jack would ever play for a rival of arsenal, he is a gooner through and through. If he leaves on a free expect Bournemouth or juventus to be paying his wages for the next 4+ years. Jack makes decisions with his heart and his best mates play for the 2 clubs respectively and both would snatch him up on a free, juventus to have him on the bench for a relatively fair wage and Bournemouth as a starter on good wages. That said he is a gooner and I personally see him staying for at least 2 more years.… Read more »

I’m afraid of the same thing. We know how Pep feels about him.

When Pep was asked about Wilshere after his super performance in the draw at the emirates, he replied “we have plenty like him in the B team (Barcelona B)”.

Wenger pass him the pen.

The guy is clearly our best central midfielder and should be starting every week ahead of Xhaka – who has been REALLY woeful this season – in our strongest 11.

They’re completely different players and Jack shouldn’t be sitting at the base of the midfield as our sole “defensive” midfielder. But I agree Xhaka’s been poor.

I don’t believe it’s a case if Jack can be our sole defensive midfielder, it’s that Xhaka hasn’t really showed that he can do something that Jack can’t do.

Wenger won’t do anything until City and United start sniffing around. Then it will be almost impossible to have him renew easily. He is one of us Wenger. Please pass him the pen!

Give him a new deal.

About playing time, it’s sad he plays where Ramsey plays and under Arsene it can only mean one thing. Reinvent yourself and play on the front 3 or sit it out irrespective of form

Naw, even when Rambo comes back, if we stick to a 4-3-3 I’d back Jack to get into the midfield ahead of Iwobi, with Ozil moving back further forward.

Probably our best 11 (though I’d switch to a back 3 for certain fixtures):

A sea change from the time when he left on a loan to ensure he is in the national squad.

Now that has worked his way back to the starting XI in the league, it would wonderful to see him live upto his potential, starting with the game on Friday both to convey to the Arsenal hierarchy that the rebuild should start with him, as well as a by-product for Southgate and England to rediscover their midfield general.

Southgate hardly deserves him! Ive stuck up for Wilshere for years and will continue to in the face of so many friends sniggers at me saying he is indeed world class. Soon the beast shall unleash his full potential. He’s already winning MOTM awards from just coming back. Recently i had a united fan friend of mine smirk while saying he hopes they steal Ozil after years of denying his greatness.

I’d love for him to get another contract. With modern football the way it is here is a proper Arsenal player and fan who offers drive, heart and bite on and off the pitch when others cower and go missing! Potential still there for Jack to kick on again and I’d hate to see him do it somewhere else

Wenger offered diaby nee contract with worse injuries than Jack, and also he offered rosicky new contracts because of their talents, it would be a criminal if he will not offer a new contract to Jack especially now when he is in full fitness and played half a season without an injury.

Look, opinion on his quality or not i would take 11 players with jack’s attitude then 11 like sanchez regardless of the gap in quality. I don’t care if we lose as long as the team fights to the death and cares about the badge as much as i do, that is why i was gutted to see gibbs leave and why i hate this reluctance to sign him up.

Remember when jack was singing what we think of tottenham on the fa cup bus ? i certainly do.

As much as I like Jack it’s not so clear cut for me. Managing his injuries will be a challenge for him for the rest of his career. So far so good this season, and yes I’d give him a new contract but expecting him to become a key first team player again might be optimistic. One step at a time though, like Wenger said you can’t doubt his ability.

Why isn’t it done already? Just do it Arsenal, FFS

I love Jack. I hope he stays.

At what cost? What is he allegedly asking for? what is Arsenal offering? Would 200k? 150K? He’s already getting like 90K isn’t he?

I read all these statements about giving him a new contract but at what price tag?

And this is where we fans want him to be. My favorite player at the club at the moment – and one of the most interesting to watch (in the league of TR7 and Santi) Good health to you Jackie boy!

It’s ridiculous that he’s not been offered a new contract, Wenger was handing Diaby extension after extension. Jack is fit, playing well we just need him in the squad damn it. Wenger pisses me off sometimes with this procrastination.