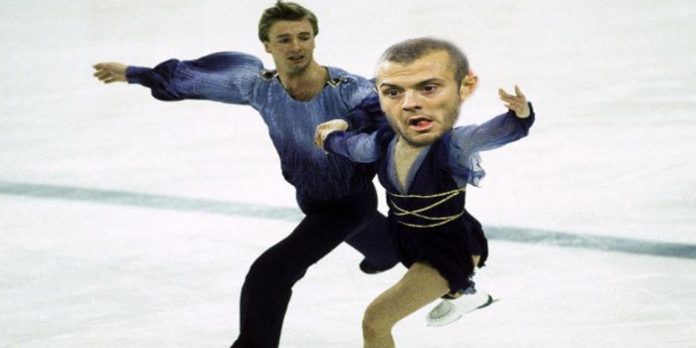 Arsene Wenger has played down the fact Jack Wilshere went ice-skating with his kids yesterday although he accepts it’s a potentially perilous pastime for a footballer.

The England international posted a picture of himself on the ice with a joking caption that read:

“Positive week, managed to get through 20 minutes of ice skating without getting injured”

Positive week, managed to get through 20 minutes of ice skating without getting injured ???

“It’s not ideal, honestly,” joked Wenger when asked for his take on such an injury-prone player indulging in such winter sport tomfoolery.

“For your balance, it’s not bad,” he continued. “For the way you fall down, as well. But for a footballer, it’s not great. It depends as well what you do.

“I just heard about that. I didn’t know [he’d gone ice skating]. You can do ice-skating by bringing your child on and just make sure that nothing happens to him. Ice-skating violently…I don’t think he did that.”

Wilshere is expected to start against BATE Borisov tomorrow evening as the Gunners complete their Europa League group stage with a dead rubber at the Emirates.

A Different George
Reply to  Goonerink

Goonerink
Reply to  A Different George

I have but I also don’t confuse the two because they are played on the same surface.
It’s not like boxing is as fake and scripted as the wwe….I mean the Mayweather/Mcgregor fight excluded…

It was a great excuse for a quality Arnie one-liner reference, either way.

I also like “he had to split” and “Hey! Christmas Tree” from The Running Man, amongst many others.

One of my fave Arnie films for the one liners alone!
I’d love to see kolasinac come out with some on the pitch.
Also no offence George, just wanted to have a pop at that farce. (let’s be honest it’s the only pop I’d get at those two with out receiving a bloodied face!)

I never actually said understood that one-liner. I was just thought it was some random ridiculous one. I love it! But does it actually mean anything? Plain zero.

Well, I heard when Wilshere was offered a new contract, this was his response:

““YOU COLD-BLOODED BASTARD, I’LL TELL YOU WHAT I THINK OF IT. I LIVE TO SEE YOU EAT THAT CONTRACT, BUT I HOPE YOU LEAVE ENOUGH ROOM FOR MY FIST BECAUSE I’M GOING TO RAM IT INTO YOUR STOMACH AND BREAK YOUR GOD-DAMN SPINE!!! NYAHAGHHAHAHH!!!!!”

surprised the kids can go without helmets. That doesn’t happen in Canada and we’re the best skaters/hockey players in the whole world!!!

Come at me if you dare, but this is the one thing we, as normally humble Canadians, can brag about 😉

Hockey is played on grass, bro.

Not sure the russians, fins and swedes agree.

Czech for sure not

I think Wenger is thinking of the movie Slap Shot!

I know this won’t be a popular statement but I must say it,it’s time for Jack to leave the ARSENAL and moves on…

You in a bad mood today?

Yeah, this skating incident is unforgivable!

That boys on thin ice!

I dunno Arsene…may help him dance in the middle of the pitch too.

Guess he’s been hanging out a lot with Cech lately. Cech is an ice hockey legend.

For Shits sake people , what a non story!!!
I’d be more interested in some real issues, like who will be our centre backs in the near future??

We have nothing better to do than read this vaguely Christmassy story, but clearly you have wasted a lot of your hugely important time to come and read this. How much more angry are you at yourself that you took even more time to tell us it was’t worth reading? I sure hope you don’t waste any more of your valuable time by reading my reply.

The first one is obviously Torres!