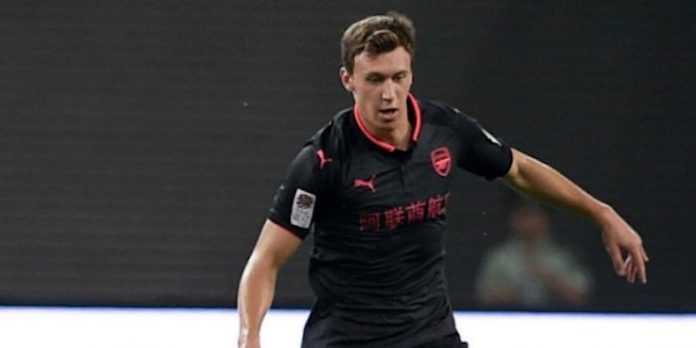 Arsenal have confirmed that Krystian Bielik will spend the rest of the season on loan at League One side Walsall.

The Poland under-21 international was part of Arsene Wenger’s pre-season plans when the club travelled to Australia and China, however, surgery on a shoulder injury has hampered his progression this season.

✍️ Walsall Football Club are delighted to confirm we have signed @Arsenal defender Krystian Bielik on loan for the rest of the season.#BielikSigns

Bielik did well when he was sent to Birmingham City on loan last season and will be hoping he can make a similar impact at the Bescot Stadium.

Pleased with his new arrival, Walsall boss Jon Whitney said: “Krystian is a very technical, ball-playing centre-half and he’s had a good loan spell with Birmingham last season, so he’s got a Midlands connection.

“He was really good for them but he’s had a shoulder injury in the last few months.

“I’ve been chasing him for about two or three weeks now, and we’ve persuaded him to come here ahead of other League One clubs and some abroad, too. We’d like to thank Arsenal and Arsene Wenger for allowing him to come to us.”

All the best Krystian.

Dafuq? League One? Dude had a great loan in the Championship for Birmz.

Career being handled so badly.

He fell out of favour at Birmingham (change of manager, admittedly, and switch to back 4). He’s a 20 year old CB, he’s not above league 1, he just needs to go somewhere he’ll get games.

He’s a 20 year old DM. This conversion to CB is part of his career stalling.

We could’ve used a DM or two this season…

At least it looks like their manager really wanted him, so at least he will play a lot, which is really the most important thing right now.

With all the out goings this window, our training ground may look quite empty!

Also, with no defensive reinforcements, Wenger has no choice but to focus and coach the team into defending as a unit!

LOL, good luck with that.

Even further down the pecking order now. We have Chambers, Holding and Mavropanos incubating at Cback. I don’t think he is answer in midfield either if Wenger is even willing to consider AMN. One option in midfield may be Alex Song. He is training with the team having been released by Rubin Kazan early. Not sure what the issue was there but in his tenure with West Ham, he had a good start then steadily declined. However he has experience and a good frame to prevent us from being bullied in the central areas. IF anything IF he does impress… Read more »

There he goes a Walsalling