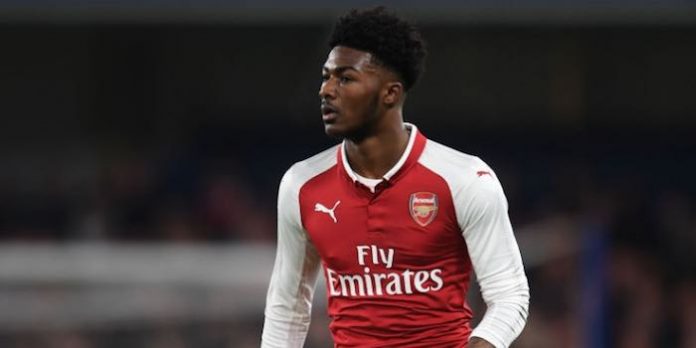 Arsene Wenger last night confirmed that had sanctioned the sale of Francis Coquelin to Valencia, and that move is expected to be confirmed today.

The 26 year old was allowed to leave by the manager who has barely used him in the Premier League this season, but he at least added some depth to the squad.

With Aaron Ramsey injured, and Jack Wilshere’s next few weeks in doubt because of an ankle sprain picked up in last night’s 0-0 draw with Chelsea at Stamford Bridge, it has led to speculation that a midfield purchase might be on the cards.

However, Wenger seems willing to blood Ainsley Maitland-Niles in midfield once he has an established left back/left wing-back available to him again.

Asked about his plans for life with Coquelin, Wenger said, “First of all the best way to replace him is to get Aaron Ramsey back and Mesut Ozil back, that will help.

“After that, we’ll see. We saw Maitland-Niles again had an outstanding performance tonight. He’s a defensive midfielder basically, so at some stage I play him in there.

“We have Kolasinac injured, Monreal injured, but they will come back so that’s an opening for him.”

Wenger has spoken previously about Maitland-Niles as a defensive midfielder in the long-term, so this could well be the plan. It’s hard to give a player of potential games if you buy someone, and it’s not as if he’d have to replace someone who has played a great deal this season.

Nevertheless, injuries may put pressure on the manager to dip into the transfer market, but let’s see what the next few weeks bring.

Arteta: We have decided who will leave on loan

Looking forward to AMN getting a shot in the middle. He’s got touch, speed and composure. He’s no Coq but he’ll bring some different qualities in there i reckon.

I’m glad he’s no Coq. We don’t need another ore-trick pony, do we?

Wasn’t Gilberto ? And I put him in most of my arsenal 11 (that I remember)

It was a damn good trick that expressed itself in many incredible ways. http://arsenalist.com/f/2016-17/arsenal-vs-man-utd/coquelin-valiant-attempt-to-block-rooney-shot.html

I’m okay with ditching the Coq for AMN. He’s been one of the very few positives this shambles of a season.

Agree. I think the Coq deal is a good one. We get a bit of money, free up some wages, for a player who while he gave it 100% just wasn’t good enough for Arsenal (or at least what we should be aspiring to). AMN has done well this year and is worth testing a bit more. Hopefully, though, we buy a proper seasoned DM. I’m sure we won’t but what a difference it would make. Otherwise, seeya Coq. You had some good games for us, and I’m glad you got to this level. You might have been yet another… Read more »

I’m not sure he looks like a DM. Sure he’s quick and athletic, but he’s not overtly strong or aggressive. He also is quite technical and likes to get forward. I think he looks like he would make a good midfielder, but not a combative ball winning defensive shield that most of us know we need.

Kante isn’t overtly strong or aggressive.
Niles is great at one on ones, a good tackler and has great recovery due to his pace. If he is positionally disciplined he could be a very good DM in our system.
Because Wenger sure as hell isn’t fond of a typical midfield destroyer.

“Kante isn’t overtly strong or aggressive”… look I love AMN’s potential, but let’s be realistic about Kante. He’s a beast.

The guy has a sixth sense for hunting down the ball that a great DM needs. Look at his heatmaps the season Leicester won the title. His record of two titles in a row deserves more respect.

We don’t have a track record of developing DMs at Arsenal. Like you said, Wenger isn’t fond of typical destroyer. AMN might turn into a fine DM, but not in Wenger’s current system.

I agree with you, to me it’s still a bit early/unclear what is AMN’s best position. The guy has good technique and is quite an all rounder. It’s not dissimilar to the Ox situation except that AMN is more disciplined defensively, and slightly less offensive minded.

My fears exactly. The role is so important to the way we defend and attack, and we don’t have anyone excelling in the role for AMN to learn from either.

unrelated , but does anyone else find themselves speaking like AW at work ? I sometimes put an “also” in a weird part of a sentence and often speak about “opportunities” when someone has made a balls up. I also try and shoehorn the word “positive” in where people least expect it. I suppose after 21 years of AW , some of his mannerisms are bound to find their way into fans brains.

Also I find my self using “internal solutions” at work and especially at home.

I used many “internal solutions” when I was single!

Spot on! Countless times, I have found myself responding to enquires with wengerish refrains ” when I get the information, you’ll be the first to know” or ” the new recruit lacks on-the-job sharpness”.

While here at the office, whenever we do a new staff recruitment, we aim for “top top quality” but who will not kill the careers of the younger staff

I Didn\'t See It
Reply to  roof_attack

I think you have a little bit the Arsene diction problem…..

Praising colleagues for their mental strength, which is code for calling them a fuckwit.

I work with a little bit the handbrake on until i’ve had my morning coffee.

Our team at work often lack a little bit of sharpness in executing their daily tasks. But overall, I believe they work hard you know. Also, many times they showed character in overcoming adversity.

We will never get to play with our Coq again!
Our Coq will now be handled by a Spaniard?
Sad!

Who will then take over from Maitland-Niles on left back? Do we only have Sead who can play there atm? A lot of questions.

No reason Monreal can’t play there when necessary, we have plenty of CBs at the moment.

Etoile Brilliant
Reply to  And

How about Kieran Gibbs? …..Oh wait, what’s that?

kaius
Reply to  And

That’s actually an excellent question. AMN is already filling a gap in our squad. We either need a replacement left-sided defender or a replacement DM. Wenger can’t have it both ways.

Fair play to the kid – it has been ages since we have had a youth product come in and do really well, and actually get given a chance to play. He certainly hasn’t let anyone down, and has definitely been one of the bright spots this season. Once a gunner……

You can put that down to his mum showing up to training as she did and bollocking AW!! That was funny!

So Ozil is coming on then?

I like the way AMN got a loose ball in the penalty area, calmly looked up and passed it out. He’s very calm and composed under pressure and am sure will do well as a DM

Big fan of AMN. Whilst he’s not a great finisher (see his YouTube show reel), I haven’t seen anyone since Glen Hoddle who can ‘pinpoint the hole’ so well with his lobs into the box. If Wenger can play him deeper and get him pairing with Giroud, we might be able to rid ourselves on relying on Iwobi’s pointless runs across the front of the penalty area.

I can’t wait for such a bold step. Who knows if Niles is d ultimate solution we have been questing to the holding midfield position?
I wish him continuous development of no complacency

I would love to see Niles in the DM position BUT he will never play Niles when Ramsey, Ozil and Xhaka are fit. We won’t have a decent DM until a new coach arrives. He just said that Coq is leaving but we have Ramsey and Ozil coming back. He doesn’t believe in the designated DM position

only for back up, and not a regular

I hope AMN can get a chance at DM at some point this season. We’ve got Wilshere, Xhaka and Ramsey when healthy (which may not be too often) as the top three for the two center midfield positions and then of course Elneny who can fill in as needed so not sure how much AMN will get an opportunity there even with Coquelin leaving, though I would like to see it. Willock is also an option.

But where’s the backup fullbacks?

Potentially yes but dangerous assumptions. Selling one of our better back ups in midfield and retaining mediocre assets like elneny, promoting youngsters who have yet to deliver on promise is akin to the illustrated flawed thinking around our defense last summer. We sold an improving back up in Gabriel and instead were reliant on either of Chambers and Holding to work before they had even proven themselves. Experience comes then at expense to us. Even more bizarre we tried to sell Mustafi . This is a very dangerous move by Wenger which may/may not pan out. Plus we have to… Read more »

I would personally avoid moving AMN around too much. He has shown quality adapting to fullback. We are not in a position at this point of the season to risk new adaptation (even if there is experience in position from Academy..this is a different level) And it also means we have to adapt again in terms of fullback cover. All this carry potential latent cost and at a point where we cannot afford to shed points over experience gained. Very risky. At best I think Wenger should keep AMN focused on fullback, switch him to RFback to cover Debuchy (hopeful)… Read more »