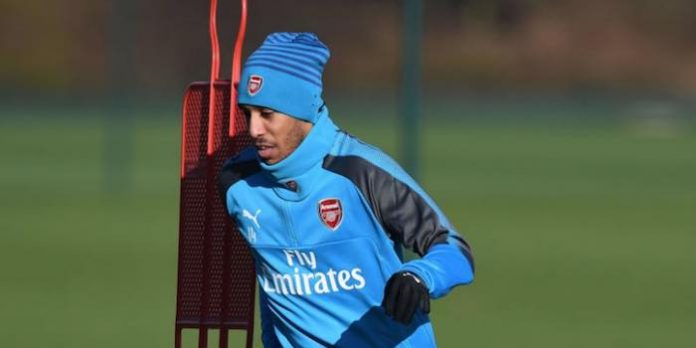 Arsene Wenger has provided the latest team news ahead of tomorrow’s Premier League clash against Everton.

The Gunners have to get back to winning ways having lost 3-1 to Swansea on Tuesday, and there are some doubts over the club record signing Pierre-Emerick Aubameyang whose participation from the start is in doubt after he was hit with illness and hasn’t been able to train fully since his £55m move from Borussia Dortmund.

Asked if the 28 year old, and fellow new arrival Henrik Mkhitaryan would start the game, he said, “Certainly Mkhitaryan will start. Aubameyang I have to see how well physically he is today. It’s sickness, fever.

“He wasn’t able to join in training properly, he started yesterday but still wasn’t completely well. I have to check with the medical department how well and how fit he can be.

“We had Jack who was sick, I will have to assess him today. I hope he will be capable to be in the squad.

“He’ll practice with the team today. Welbeck is not ready.”

Fingers crossed on Aubameyang, his inclusion would be a real boost for a game we really have to win.

For more on how he arrived at Arsenal, and behind the scenes in the January window, check out today’s Arsecast

Auba out of Saints game, Tierney a doubt

Arsenal 3-0 Newcastle: By the numbers

He really settled in quickly..

“Welbeck not ready”. So nothing new there then.

Welbeck not ready?? Thank f—k for that!!!

Hearing he’s got a case of the Kallstrom fever

At least we haven’t bought someone with a broken back this January.

Why do our squad constantly get sick this season?

get well soon JackMeyang.
Looking forward to those lifted through ball goals soon

“Welbeck is not ready”: is that generally to lead the line at this level? or just not for this game?

Usually when the ball comes flying into the box

He’s alright in those moments, as there’s always a chance the ball might bounce off him into the net.
It’s when it’s at his feet that the real trouble begins.

Maybe it’s saving face due to him missing a court case because of “the flu”? 😀

Everton’s not easy and our 2 games after this are definitely difficult ones. This is a must win to get the confidence up.

Can’t say I’m confident in anything especially with all the changes the team has gone through. Well, at least we at home. COYG

Holy cow, do we still have Welbeck? ?
How is that we’ve sold every striker who can score and he’s still here? Where was he hiding?

We only roll him out for the Man U games.

The answer was in the question: “…every striker who can score…”.

That ball doesn’t seem to be rolling very well !

It’s got a punture

Paddy stood up
Reply to  Fergie

Stringer+Bell
Reply to  Paddy stood up

That paddy is quality and could be wonderful after every goal. 57 thousand fans singing that will go down as greatest ever.

Goonerest
Reply to  Paddy stood up

“He came to us cos we were shit.
Auba, Auba.
He scores top goals and he’s quiet quick.
Auba, Auba.
He’s the new Henry,
Or at least we hope he’ll be
He’s got the longest name in our history
Pierre-Emerick Aubameyang
Arsenal’s number 14!”

To the tune of Bangerang by Skrillex
Aubameyang! (Insert laser sounds)

The news that Alex song is training with us. In all honesty, the guy is only 30. But with Coquelin gone, xhaka looking like he couldn’t find tackle in a fishing shop, and elnenys limited pass range to the bloke either side of him, would we be better off without him? No

The bloke can also fill in at center back.

Alex Song isn’t very good, he has the positional sense of a paper bag in a hurricane. The only question in our midfield he is the answer to is: “why were we so bad back then, too?”

If you think Xhaka is infuriating, then Alex Song was doubly so. A talented player who literally could not be bothered to stand in the right place, let alone track his man back.

I watched Barca vs Valencia last night and there was a very assured CB who made a couple of crucial blocks and tackles, never put a foot wrong despite facing Suarez and Messi, among others.

I also saw a DM who kept Messi at bay most of the match, despite only arriving at Valencia. and indeed the Spanish league, a short while ago.

Their names? Gabriel Paulista and Francis Coquelin. The names sound familiar but they seem different players to the ones we had.

The only thing is Coquelin didn’t play

You didn’t watch the match, did you?

Clearly everyone doesn’t remember the Alex song I do then. Maybe it was the pass to Henry’s comeback goal that got me blindsided. But I was gutted to lose him at that time. Especially for fifteen million.

Still stand by my comment. everyone’s crying out for a defensive mid. What are the other options for the next 6 months? Emmanuel Petit ain’t exactly looking up for 90 minutes in the commentary box.

Remember him well. That’s why I said “isn’t very good”. Because he wasn’t.

He’s a defensive midfielder who thinks he’s got a free/roaming role. He might set up the pass for 1 great goal but while he’s trying to do that once a match, he’s letting 4 or 5 chances for the opposition go because he thinks he’s Messi.

‘certainly Mkhitaryan would start’. I hope this means that Wenger has finally made up his mind to drop Xhaka.

More likely to be Iwobi

I think it means Iwobi on the bench. But man I would love to see Xhaka join him there, and try Elneny as CDM.

He’d drop IwobI and slot Mkhitaryan in on the left of a front 3, I reckon.

Big game for Lacazette if he starts as Everton can certainly be got at down their right hand side so I’d expect Mhkitaryan to be creating at least a couple of chances for him.

At least we haven’t signed someone with a broken back!!

It’s been a bitter-sweet transfer window IMO. Losing Giroud was a blow although entirely understandable on his part, I just hope it doesn’t backfire on us, particularly in the Europa League. And as much as I’m super chuffed that Özil has signed a new contract, I’m a little concerned still that we didn’t also see a photo of a beaming Wenger standing with him as he signs his new contract as well. If there was a time to do it, it was in January surely? Perhaps the agreement is that Jack has to prove his fitness and performance over a… Read more »

Fever is sometimes derived from anxiety/ nerves. Dont worry auba, the goals will flow cos you got Mesut & Micky with you. Just pop a cpuple of M&Ms and the fever will go away.

auba is fine he trained, he had a little old and missed barta hearing and the boss has to protect him and said he was ill as those in germany labeld him disreapectful.

I think he will also start as lacazette needa a breather as we played shit and he ia our of form and played many games recently.

I hate it when blogs says we have to win as, last time he said that we lost to Swansea!!

It’s not me saying that that’s the problem, you know!

Do we not have to win every game we play?

Just get that fever on the pitch!

Ok, so probably not the last few lines, but you get the point. (And hey, when we figure out how/if he fits with lacazette those lines are redundant anyway.)

Is there a 24/7/365 bug that goes around the training ground at Arsenal? Seems like there’s always someone that’s ill

We need a little more cowbell

PEA gets sick he is proper Arsenal now !

How many PL teams have sick players every fortnight ?

Is it often Wenger confirms that a player will start the match like he did Mkhitaryan ? “Certainly he will start”. He’s making him a big part of our first team, a key player, and trying to build his confidence back up

Please, Auba is gonna walk in your team.

Typical Arsene, always puts himself in a position where he it’s the last throw of the dice. This is no different. Shit management.