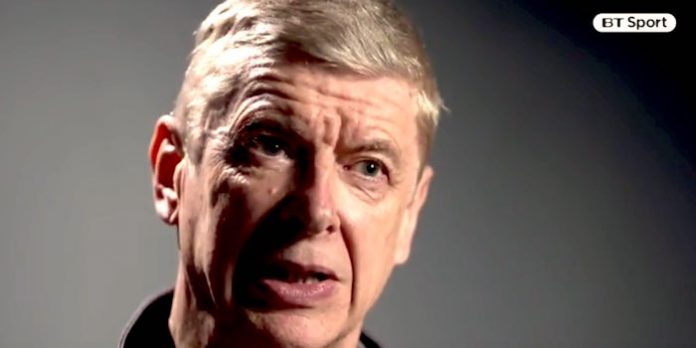 At the moment Arsenal have two routes into next season’s Champions League: finishing in the top four, or winning the Europa League.

Neither are exactly long-shots but there’s a lot of work in each case to achieve it. Speaking to BT Sport ahead of Saturday’s North London derby at Wembley, Arsene Wenger says his focus is on both, and that his team cannot allow themselves to get into a position where they have to potentially prioritise one over the other.

Asked to choose between the Premier League and the Europa League, the Arsenal manager said, “Both. We want to qualify through the league first. Because you cannot bank on a cup success you know? That would not be reasonable.

“In top level sport you do not switch on Friday to play on Saturday and the day after you switch off for three weeks & you switch on again. It doesn’t work like that.

“The results are a consequence of a consistency of attitude and of focus of everybody individually and of the team as a whole.”

It was put to him that he may have to make a decision if, for example, qualification via the Premier League becomes more unlikely.

“We are at the start of the real competition now and we have still a possibility to qualify through the league so we have absolutely to try to achieve that.”

Watch Spurs v Arsenal live on BT Sport 1 on Saturday 10th February from 11:30am. BT Sport is where the best in sport go head to head, bringing you live coverage of the Premier League, UEFA Champions League and Emirates FA Cup. For more information, visit www.BT.com/sport

Chelsea 0-1 Arsenal: By the numbers

Play with the same attitude and skill as against Everton and we have a chance.

Let start by a win against 5pur2 this weekend.

I would be just fine with a win against 5pur0 as well.

Agreed.
I’d like to see us win the Europa then use that as a platform to challenge for the title next season. The new signings have brought optimism again so let’s hope we can move forward from here on in and not plateau or decline as we have done over the last year or so.
Cue comments on plateauing for the last 10 years…

We’re gunning for top four, Europa and the Carabao cup. This will be a fine ending to a roller coaster year.
We can do this.
Let’s get behind the team buddies.
Let’s start by spanking the spuds.
#COYG.

I think the exciting part is we look like we have an offense and squad capable of doing just that and hopefully tomorrow will be the start of an amazing run.

What’s happened to arseblog? i used to see hundreds of comments…now there aren’t many at all.

Some articles get more comments than others.
Look for an article on squad numbers and you’ll see your hundreds!

Interesting downside to the sanctions being lifted on Iran: I can now see the ads on Arseblog.

Blogs, did bt sports sponser you?? If so, good for you.

I’m not sure it’s right to constantly emphasis player attitude and self management when the system isn’t being addressed to help them prosper, particularly in defence. It’s a bit Ayn Rand and free-market economics rhetoric. The team has clear flaw in it and it’s down to the manager to address them. Midfield, defensive midfield and defense. If we fail in the same way time and again, constantly talking about psychology and attitude will exhaust player resolve and motivation.

you will need to buy a few defenders first, and I don’t mean defenders who think they are centre forwards

I’ve said this a hundred times now. We could have Nesta and Cannavoro in there and we would still leak like a boat hit by a torpedo.