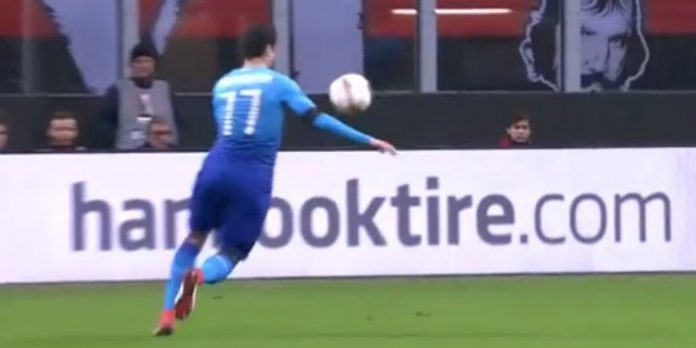 16 shots to 8 – AC Milan took twice as many shots as Arsenal but that number was a much closer 5 to 6 in the first half when Arsenal did their damage. Arsenal also created the better chances in that first half: Milan took 3 shots from outside the box and only had the one big chance (Bonucci’s header in the 43rd minute) but Arsenal created 5 shots in the Milan box, including three big chances all in quick succession, Welbeck (41, fast break), Mkhitaryan (45, fast break), and Ramsey (48, goal).

7 key passes – Again, the overall numbers flattered Milan but that first half saw Arsenal’s main playmaker, Ozil, notch two assists, including a beauty throughball big chance for striker Aaron Ramsey. Mkhitaryan also created a big chance for Welbeck in the 41st minute. It’s incredible that Arsenal created three big chances against Milan in this match, they have only allowed 2 total in their last 6 matches.

Ozil now has 9 assists in all competitions for Arsenal. That and 5 goals on the season. Ozil’s only played in two Europa League matches but he already has 1 goal in two assists in those games.

34 to 16 tackles – Biglia was a beast for Milan, winning 9/12 tackles in this match. Meanwhile, his midfield partner Kessie also won 5/6 tackles taking their total to 14/18 tackles in this match. Arsenal’s midfield duo of Xhaka and Ramsey won just 1 tackle. Total. One of two. Both attempted by Ramsey. In fact, Arsenal did so little tackling in this match that Xhaka, Ozil, Ramsey, and Wilshere all combined for just 1/2 tackling.

But of course Milan made a lot of tackles: Arsenal didn’t need to win the ball back that often because Arsenal already had a two goal lead. Arsenal also played on the counter, meaning that they were attempting more dribbles and getting into more one-v-one duels with Milan center mids.

Tackles and dribbles are sort of “co-stats” in that if a player advances the ball by himself he only gets a dribble when he gets into a duel with someone trying to stop him, with a tackle. Arsenal attempted 26 dribbles today and it’s probably no surprise to learn that they only won 13 of them.

Mkhitaryan led Arsenal in both stats. He won 5/9 dribbles and 3/5 tackles. The dribbles probably make sense because he was Arsenal’s main counter threat but the tackles will probably surprise. I’ve already noticed that he’s a much more aggressive tackler than I’m used to seeing at Arsenal. Not nasty, but more that he just tackles at all. Alexis liked to “virtue signal” his tackles: running back 100 yards to make 1 tackle a game. But Mkhitaryan just tries to win the ball back.

29 to 23 Loss of possession – I was surprised that Milan lost possession so much in this match but Bonaventura alone turned the ball over 8 times, 7 of them just bad touches. Bad touch and dispossessed (collectively here referred to as “loss of possession” or “turnovers”) typically indicate pressure. Bonaventura’s 8 turnovers were all in or very near the Arsenal half, and he was even dispossessed with a tackle in the 6 yard box.

Arsenal aren’t known as a high pressure team and only forced 4 turnovers in the AC Milan final third. Conversely, Milan won the ball back in the Arsenal final third 7 times, including three bad touches by Ainsley Maitland-Niles. AMN had one bad touch right on the edge of the 6 yard box. You don’t really want to do that there. Not ever.

Arsenal took an early lead and defended that lead! While wearing those cursed blue shirts.

Burnley 1-1 Arsenal: By the visuals

Arsenal 0-1 Man City: By the visuals

my name is bob

God I love Ozil, as frustrating as he can sometimes be when he hits form he is beautiful to watch

BenG
Reply to  my name is bob

The team need to make more runs and he will pick them out. Ozil and Ramsey work so well together as Ramsey loves getting into the box. I hope they do the same against Watford

Maybe Ozil cuts a frustrating figure because of the midfield? Today the midfield got to play, especially in the first half, be it by design or sheer quality over Milan’s counterparts.

If and when we do get a new manager who’s hopefully a solid tactician, we may see our team improve on the way we play and that might allow Ozil to play on a consistent level.

It was a good victory albeit against a club who are in terminal decline just like us.
But please don’t believe this is a threshold moment, a change in fortunes because it is not.
Arsenal were and still are a very poor team at worst and a bang average one at best.
And he still needs to go.

“Terminal Decline” just a bit of over reaction I think

I like this “Alexis liked to “virtue signal” his tackles: running back 100 yards to make 1 tackle a game”…..must have been trying to con us all, the sneaky so and so. Well, good luck with that at the manures. Those noisy lot and their ‘special’ you know what are not known for their patience……or even class!

It is amazing what happens when we attack early in a game. We need a strong start in every game and we might be able to move up the prem table

I think that there is a strong correlation between Ozil’s performance and our midfield performance. If our midfield builds the play from deep properly and he gets the ball in the space, then he will be at his best. That’s why when Jack was good in the deeper role, Ozil was much more effective & could focus on getting the ball in the space and deliver through balls. When our midfield can’t break the pressure, like it was in recent games, Ozil is neutralized completley and he doesn’t effect our game at all. Ozil is no leader, but with the… Read more »

A P
Reply to  Arseil

Did Jack play that well though?

Arseil
Reply to  A P

Against Milan..? No, but he wasn’t at the deeper role… For the first time in many games Xhaka played well, Ramsey was deep, and the build up was not bad at all. We handled their pressure not so bad, and when Ozil got the ball he was around the No 10 position. It didn’t happen throughout all the game, but when Ozil is good 2-3 times can be enough to create 2 assists…

Mpls
Reply to  A P

No, but he also didn’t play as poorly as some might suggest. What he did do to my eye was fill that spot between deeper mid and attackers more consistently. And get back into position to set up an organized defense. Both were key on the day. Having an actual midfield 3 instead of losing a true midfield spot to Ozil – who is best when he’s roaming – makes our midfield so much more stable. Then the hard work rate of Mkhi and Danny allowed Ozil to really find the freedom to do what he does best. It’s also… Read more »

Mkhitaryan reminds me very much of Rosicky. Brilliant footballer but also has that willingness to slide tackle everyone that comes in his way. Hope this game yesterday lifts his and the teams confidence and we‘lol see more of that in the next weeks.

Appropriate seeing as they were both schooled at Dortmund. IIRC Mkhitaryan was supposed to be the replacement for lil Mozart.

It’s sad to see the my favorite blue jersey being a cursed one for the team.

We caught Milan on their bad day and probably they are a bit tired from their extra time Lazio game. This tie isn’t over by any means and I hope we learnt the lesson from Ostersunds defeat.

It will be very interesting to see how AW picks his team for Watford. I would like to see Ramsey, Koscienly, Kolasinac, and Jack rested for that game.