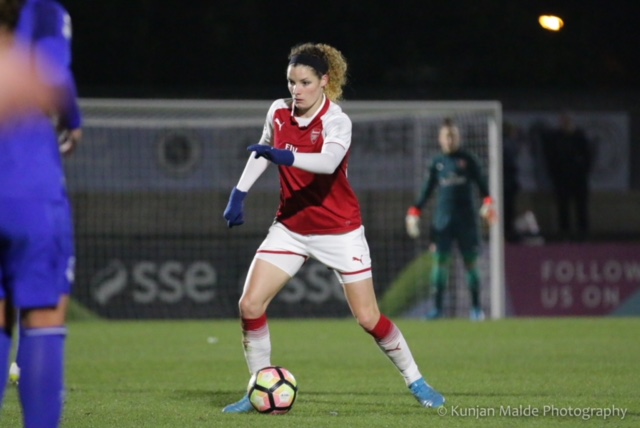 Arsenal come into the Continental Cup (the women’s equivalent of the League Cup) in good form, with 5 wins on the bounce and six consecutive clean sheets. Dutch midfielder Dominique Janssen has been central to this fine run of form, starting each of the last 6 matches. Janssen is a regular in the Dutch side that won Euro 2017 and Dominique, like many of the players from both sides, will contest the final immediately after an international break.

The 23 year old represented the Netherlands at the Algarve Cup in Portugal recently and admits the situation is not ideal, but insists that Arsenal go into the game with confidence, “We are all very excited about the game, it’s tough that we have an international break right before so we don’t have too much time to prepare. But we have improved with every game recently and we have gotten much better, so we are ready and excited for the final.”

Dominique, known for her precise tacking and tidy distribution with both feet, has become a mainstay at the base of the Arsenal midfield. She says the run of 6 clean sheets has been a natural byproduct of a team growing in confidence since the turn of the year, “We didn’t even notice that we were keeping so many clean sheets until today, it is something as a team that has just come naturally to us, we have just concentrated on playing how we want to play.”

Arsenal have won each of their last two games 1-0 with a goal from striker Beth Mead and Janssen says the defensive platform is not just beneficial for the defensive players, “That defensive solidity gives the whole team confidence. The attackers know that if they score, we have a great chance to win the game. In the last two games, 1-0 has been enough and we haven’t given up many chances either.”

This is in stark contrast to the last time that Arsenal played against Manchester City back in September. On that day, the Gunners fell to a 5-2 defeat, with City scoring three times in the final 15 minutes. Manager Pedro Losa left not long after the match and confidence has slowly regenerated under the stewardship of new boss Joe Montemurro.

Janssen admits that the team did not play to their level on that day in September and they will look to rectify this at Adams Park, “Playing Manchester City is always a great motivation anyway because they are such a great team. That game in September was a different game, now we have a different style and we have way more confidence now.”

Dominique is a versatile player, who operates as Netherlands’ first choice left-back. She started that 5-2 defeat at City at centre half and she has been called upon to drop into the position occasionally of late, with injuries to Leah Williamson and Josy Henning and the recent departures of Jemma Rose and Vyan Sampson. But largely, Janssen has played as the holding player in a midfield 3 and she says this is her favoured position.

“It’s where I have always wanted to play, since I was a young kid,” Janssen explains, “When I was at Essen, I was playing at centre-back and I thought to myself ‘I want more than to play centre back’, I want to be involved in the game more in midfield. Under Pedro [Losa] I was playing a little bit everywhere.

“Joe just sees me as a midfielder and says that I have a big future there. That gives me a lot of confidence and he is giving me chances. Even when I don’t have a great game, he tells me he has confidence in me and he plays me there in the next game and I feel like I am really growing into the role again and improving as a player.”

Dominique says Arsenal have City in their sights in the league table, as well as the Conti Cup Final. A slow start from the Gunners left them with significant ground to make up to City and Chelsea n the top 2, but slowly Arsenal have been gaining ground. City go into the game on the back of a shock defeat at Birmingham and a last gasp draw against league leaders Chelsea, which qualifies as a mini crisis by their exalted standards.

Arsenal have closed the gap to six points to City in the league with a game in hand. The Gunners have a home fixture against the current WSL champions in the league too in their quest to at least grab that Champions League qualification slot. (The top 2 qualify in the WSL). The Dutch international insists that new boss Joe Montemurro has always thought that City were catchable.

“Qualifying for the Champions League again is definitely one of our goals and the moment Joe came in, when we were quite a way behind, he said ‘big games are coming up and they will drop points.’ We know we can’t make any mistakes, but it is still open. Hopefully now they feel that we are breathing down their necks and that increases the pressure on them.”

Arsenal are nursing a host of injuries ahead of the final; Leah Williamson, Jordan Nobbs, Vivianne Miedema and Danielle van de Donk are doubts, while Josy Henning, Jessica Samuelsson and Anna Filbey are definitely unavailable. Jemma Rose, Vyan Sampson, Chloe Kelly, Taylor Hinds and Jodie Taylor all left the club this winter too. The Gunners finished the victory over Everton with two 16 year olds and a 17 year old on the field.

However, the girls have been boosted by the return of Kim Little in midfield after ten months out with a cruciate ligament injury. Janssen says the Scot’s return is a big source of inspiration for the squad, “It’s a real boost to have her back, she is a super professional and a top, top player. We’ve not seen the best of her yet because she has only just returned.

“We know she will improve and she brings us so much because she is one of the best players in the world and Kim is a great personality to have in the team too- an amazing professional. We know she gives us something extra.” The last time Janssen played in a final, a Netherlands side containing four Arsenal players were victorious at Euro 2017. Dominique and her fellow Dutchies will be hoping for a similar result in Arsenal red come Wednesday evening.

The Continental Tyres Cup Final takes place on Wednesday evening at Wycombe Wanderers’ Adams Park. Kickoff is at 7pm, tickets are available either here at £7 and £3 concessions, or else they can be bought on the turnstile on the night.

Images in the article courtesy of Kunjan Malde.

Nvm
Click to flag and open «Comment Reporting» form. You can choose reporting category and send message to website administrator. Admins may or may not choose to remove the comment or block the author. And please don't worry, your report will be anonymous.

David Hillier\'s luggage
Click to flag and open «Comment Reporting» form. You can choose reporting category and send message to website administrator. Admins may or may not choose to remove the comment or block the author. And please don't worry, your report will be anonymous.

For those interested, the club seem to be putting on free coach travel to the final: https://www.arsenal.com/news/free-coach-travel-fa-wsl-continental-cup-final (just a shame the pick up isn’t in London…). If you can’t make it, it’s being streamed live in the FAWSL’s facebook page.

Clock-End-Mike
Click to flag and open «Comment Reporting» form. You can choose reporting category and send message to website administrator. Admins may or may not choose to remove the comment or block the author. And please don't worry, your report will be anonymous.

Thanks for that info!

Jordan
Click to flag and open «Comment Reporting» form. You can choose reporting category and send message to website administrator. Admins may or may not choose to remove the comment or block the author. And please don't worry, your report will be anonymous.

“Precise tackling and tidy distribution with both feet”.

Can we draft her into the Mens team?