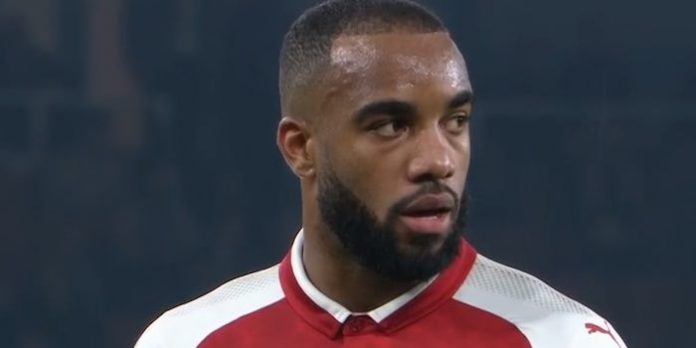 Steve Bould says Alex Lacazette has been working hard in the gym while he’s been sidelined and thinks the knee injury, which required surgery, could prove to be a blessing in disguise for the France international.

The 26-year-old started his Arsenal career with a bang, netting inside five minutes of his Premier League debut against Leicester, but was struggling for form in front of goal before he was sidelined for five weeks.

Back to full fitness and eager to fight for a place in Arsene Wenger’s starting lineup, Lacazette, who signed for €53 million last summer, has impressed Bould on the training pitch.

“It’s [the injury] unfortunate for the kid, but this little break might have done him a world of good actually,” Bould told Arsenal Player ahead of the Gunners match with Stoke at the Emirates.

“The Premier League is different to the French League where he came from, he’s found it physically tougher. It might be a blessing in disguise the fact that he’s had a month off.”

Bould went on: “He’s actually a very, very, very good football player. I was quite surprised…I don’t mean this in a derogatory manner whatsoever.

“He could play number ten. He’s a really good football player, he’s not just a goalscorer, he’s not an out-and-out striker, he can play.

“I think the physical element has surprised him a bit and caught up with him, which it does with many players who come from abroad.

“Like I said I think the last month may have helped him, I know he’s been working in the gym. We’re hoping he comes back sharp.

“Lots of the great players go through these times, it’s not a worry.”

Lacazette is expected to play a part in Sunday’s game against Stoke and, assuming he comes through that test without a setback, should challenge Danny Welbeck for a start in Thursday’s Europa League quarter-final first-leg with CSKA Moscow.

West Brom 0-4 Arsenal: By the numbers

Surely the Stoke game is Sunday?

When did the Bouldinator say this? His presser was 4.2 nano seconds long. Come on Laca, we need your goals or Danny Shinbeck will be back up to Aba.

A Different George
Reply to  Bring back David Hillier

According to the article, he said it on Arsenal Player, part of the official site.

JB1
Reply to  A Different George

I think the struggles of even Aubem proves it’s a flaw in the team and not just Lacca.

Personally, and I know people won’t like this, I would’ve preferred to have just got a direct dribbling wide player who can score as well and help to get the best out of Lacca. Instead we bought a £60m striker 6 months after getting a £50m striker and the underlying issue of why we don’t score wasn’t actually fixed.

Name a cf that’s come from abroad and hasn’t struggled with the prem physicality..
Salah has prem experience, jesus was out half the season injured because of the physical nature of the league, so those two whom haven’t really struggled have reasons.
I honestly want answers because I can’t think of any recently.

Suarez Torres Costa Also very rich to claim Salah had sufficient experience. And this isn’t Jesus’ first season and he didn’t struggle in the first one. Also his injury isn’t due to the physical nature of the PL, but the issue. Also you’re seemingly taking my comment out of content. You and others seem to think it is a criticism of Aubem or Lacca, but all you’re doing is proving my point. If it is doing to the struggles of the PL, then surely we should’ve put trust in Lacca and bought to balance out the squad (an attacking wide… Read more »

Zalatan (at 36), costa, augero to name just the few recent ones..
Fighters can make it work any where, you just have to be good and confident enough to play on your own terms.

I think merely just pointing to “3 in 5” is exactly what we did at the beginning with Lacca.

Also people are being waaaaay too sensitive. The “struggles” of Aubem isn’t to question his ability, but any striker in this current arsenal team is going to struggle, which was my point.

My point was that Lacca’s struggle was more to the team’s difficiencies than his own, and that wasn’t gonna magically change with Aubem either.

Yes, but bear in mind that lacazette was also victim of the 3 5 2 formation which had limited support up front, and auba started with 4 3 2 1 which scored 3 times and on the 2 ocation he played 3 5 2 vs spuds and city auba didn’t had sniff on goal both great players and would score loads of golas with a true DM in team and upgrade in the defensive deparment.

A direct dribbling wide player? Somebody like Mkhitaryan perhaps?

Salah or a Griezman would be perfect. That mould.

Personally, I’d love to see him at no.10 behind Aubemeyang! woof.

“He could play number 10”. A way to get him and Aubameyang on the pitch together?

So what do we do with the 5 other no.10s we already have? Usually with 4 on the pitch already (Jack, Ramsey, Ozil, Mikhi).

They all watched Bergkamp as a kid.

Play four no tens in a 4-1-4-1 formation, that I believe pep g. Played when in charge at Munich. The holding midfielder was Philip lam, I would play elneny for us, as he is a steady eddie passer , physical and consistent and reliable. You know what you get 7/10 each week. Wenger likes xhaka tho it seems.
But Alex l. Playing just behind aum. Is exciting idea I think.

I hope you recover quickly Steve! 🙂

I certainly hope he kicks into gear.

All this talk about “world class” and how Giroud is plan B, utter nonsense.

That said, we need goals from this two now.

With the europa of paramount importance, Lacazette will need to step it up to provide something-else other than Welbeck.

Clearly Arsene losing his voice has made Steve really happy. In every photo he looks like he has his own private joke running in his head. Has anyone actually seen Arsene recently? Maybe check the stationery cupboard!

top , top player , think he has done really well this season and he will get better next season