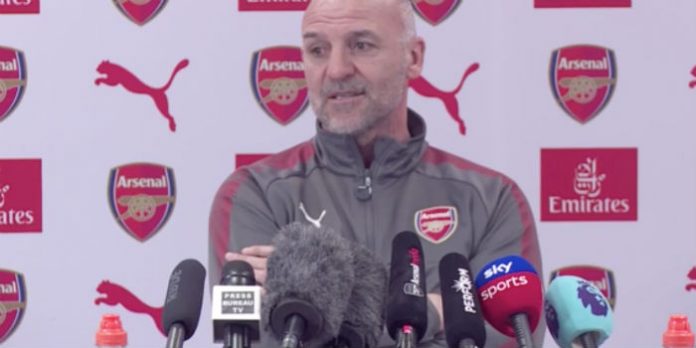 Arsene Wenger missed this morning’s press conference having lost his voice during the Interlull. In his absence, Steve Bould stepped up to face the media on Friday and, perhaps unsurprisingly, those in attendance took the opportunity to quiz him on his boss’ future at the club.

Steve, not a man to mince the few words he utters, was fully supportive of Wenger, a man he’s worked with as coach and player since 1996.

He added: “Behind closed doors, I’ve never met anybody who is as hungry and determined to win football games.

Not a man of many words is our Bouldie.

“Behind closed doors” too…

I prefer a bald clam

You can call me Al...munia

Nice to hear Bouldy, absolute legend. It must be so boing for them having to answer the same shitty questions. Wouldn’t it be refreshing to hear some tactical questions for a change?….

Laughing Stock
Reply to  You can call me Al...munia

It would be if Arsenal had any

Andy Mack
Reply to  You can call me Al...munia

Tactics are something very few of the top managers/coaches talk about much. They don’t want to give the opposition too much info to build their game-plan around.

“Wengers hunger is bigger than ever” so the last 10 years could’ve been avoided if someone had given the man a Snickers?

OK – he’s got to spin the party line but that comment was an embarrassment. I used to love Bouldy but the respect level has dropped massively of late.

Yeah 33 points behind the pace setters says everything.
He may be hungry but the results says clearly he is not up to it.
Desperate talk…

I kind of disagree. I just think no one has ever told him he might lose his job if he doesn’t produce the results!

Yes the general consensus ‘He’s earned the right to decide when he goes etc’ You hear & read this all the time in the media, people trying to be kind – nice. Problem is he’s never going to decide to go/retire, that’s been proved over the years. So we are all, as in the U2 song ‘Stuck in a Moment You Can’t Get Out Of ‘

Nobody questions his hunger, but results.

Seriously he needs to just eat, he is way too skinny

Maybe if Wenger weren’t so hungry all the time, he would actually be able to focus on organising the defence and giving the players proper instructions. It must be quite distracting. Did it never occur to Bouldy to give AW a burger or something? Or maybe Troy Deeney is following AW around and snatching away every bit of food handed to him…

And_Arsene_Said...
Reply to  The Golden Wrigglesworth

Have schools broken up for Easter?. Seems like it.

He stays very slim for someone with a big hunger.

Would like him and us to have more treats and feel more satisfied.

doesn,t matter how wenger feels , he is unable to do anything about it

This is unrelated to the article, but can someone tell me how to view comments on the iOS app? Android had a button up top in news articles, but on the iPhone I have to load it all through the browser to see comments.

Comments not available in the app but it is something we’re considering for an update.

Yes, please do. That would be a great addition.

Yeah yeah. Let him satisfy his”hunger”somewhere else after this season is over. Bye Arsene

Ultimately, whatever the current situation he and the club are in at the moment, he’s got no hair, but we don’t care.

Wenger is a sad old man who’s terrified of retirement. Deep down he probably knows that he’s past it but the thought of waking up as not the Arsenal manager petrifies him. He’s hurting the club and should have been sacked a long time ago. The good news is that this season will be his last. Even the useless Kronkies have finally rumbled him.

Win the Uefa cup and I will forgive this season!
Love, a desperate fan.

1 Press conference without Wenger and i already miss him.

LOL so one more year for the gaffer then.

Arsenal Fan TV will have plenty of ammo to expend at least.

Man does not live on bread alone, just as a team does not win titles on hunger alone.