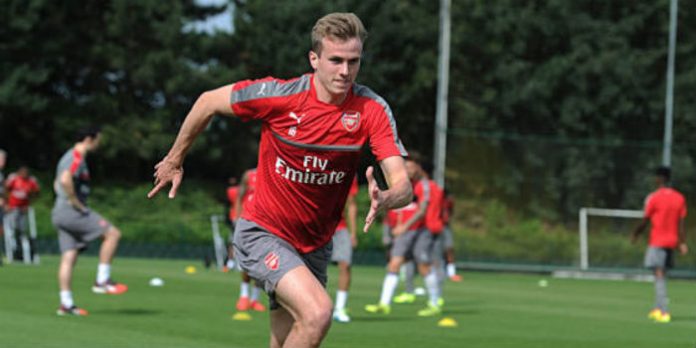 Rob Holding says he’s becoming more aggressive and demanding as a result of working with Jens Lehmann at London Colney.

After two stints as a Gunner during his playing career, the German returned to Arsenal last summer to assist Arsene Wenger in a coaching capacity.

Tending to sit in the directors’ box on match days rather than the dugout, the 48-year-old has cut a relatively low-key figure so far this season, however, Holding insists the ‘Invincible’ continues to live up to his notoriously feisty reputation in training.

Speaking to Dubai-based publication Sport360, Holding revealed: “Jens has been a big difference since he’s come in. He’s very demanding and not afraid to get down and dirty with you – he’ll get at you and I’ll have a little snap back.

“But then after training we’ll speak about it and we’ll come to an agreement on what went on and then the next day it’s like nothing happened.

“There’s no grudges held and it’s what I think is the key to getting the best out of me. You’re more aggressive and more demanding as a consequence and that’s what I need to be as a centre-half.”

Holding also took time to reflect on his progress this season, admitting that the first few months of the season were difficult. He’s since garnered regular game time in the cup competitions and insists he’ll continue to snap at the heels of the club’s more experienced defenders.

“I’d say the first half of the season was a bit in and out, with the cup competitions, and then since late January it’s been a real knuckle down, cracking on with it and doing what I need to do,” he said.

“The manager’s noticing it and against Watford I felt like I had a really good, solid game.

“He knows that I’m there, pushing, and any little mistakes from Koscielny and Mustafi or slight injuries, I want to be the first one that he’s looking to.

“I think I’ve improved on things like heading, defending crosses, things like that and being more physical.

“I had Troy Deeney (against Watford), I knew he’d be more of a physical presence. I tried to be smarter as well, I didn’t try and fight with him as he’s a bigger guy anyway!”

Me2
Reply to  Blackadder

PGunner
Reply to  Me2

Fuck off and support City then………

In other words, Deeney has bigger ‘cojones’????

Wenger’s go to guy when dealing with C**tish forwards.. Arnautovic, Costa and Deaney.. all tests passed

He’s got something about him, our Rob. Loves a tasty little battle with a centre-forward

Edit: It’s the Italian in him. The Stalybridge Chiellini.

And what are we expected to say about this then?
bit late perhaps?
All I want is Wenger gone.
And Arsenal being successful under a new manager
I don’t give a fuck about this rubbish…

PGunner
Reply to  Me2

You are a bad fan

“Lehmann gets down and dirty in training”

Incidentally, ‘Holding’ is a surname that suggests Anglo-Saxon ancestry leading back to the Danish invasions of the 8th or 9th centuries. It’s formed from the Old English ‘Heald’, which means ‘protector’, ‘guardian’, or ‘defender’; and the suffix ‘-ing’, which means ‘people of’. So Rob’s people are the defender’s people (people of the defender). This, of course, carries into the modern meaning of ‘holding’ when we use it to mean ‘supporting’, ‘carrying’, ‘keeping sure’, ‘grasping’, ‘landholding’, etc. There is a similarly sounding Old English word that means ‘dead body’, but somehow I have trouble believing a group of people would rally… Read more »

Oh yes, I enjoy your combining of the French ‘familiar’ with the Latin ‘reminiscent’; English really did take quite a lot from those two languages! And in the senses you’re using them, it turns out they entered the English language around the same time in our history. Well done!

English is really just Dutch with a French vocabulary. At least that’s how I see it (I study linguistics, fwiw).

Re: familiar. I’ve posted similar things a while ago under a different name. But when I started growing a cheeseburger for a head, I decided it was time to make a change. I also recently became a mayor.

I wish I was, but sadly, no, I don’t share his talents. Massive fan of the Rambler, and wish he posted here more often.

I’m so bloody bored. When does the football return, again?

Yeah I can’t wait for league football to start up again.
Got a lot of work to do to get to that magical 40 points behind the winner mark.
But I have faith in this team and our manager – I know they can do it !

You are my favorite commenter on here. I salute you, Mayor McCheese. *doffs cap*

It strikes me that mayor McCheese(head) has an eye for brilliant writing. I am not a native English speaker, but I find his/her commentary here to be absolutely fantastic

“I’ll have a little snap back” ?? Don’t get above yourself Rob.

I would put Holding ahead of Chambers on our CB pecking order. I think Arsene prefers Chambers though.

Both are terrible defenders..

Do you like anything about Arsenal or are you just a troll who comes on here to moan?

My wig smells cheesy
Reply to  Me2

your a total dick

I think both could become really good centre backs over time, Holding especially but Chambers has put in some good shifts too

Some former players are trying their best to help the team in these challenging moments in any form possible. Kudos to Pires, Lehmann, Grimaldi et al. And to the tv “pundits” waiting to take over the club, hope they understand that it doesnt always have to be money.