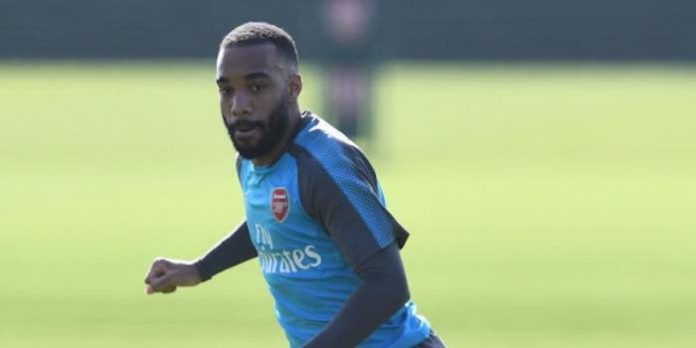 Alexandre Lacazette has returned to full training following his recent surgery for a knee problem.

It was announced on February 13th that the French international was due to undergo the procedure, and it looks like everything has gone according to schedule.

The 26 year old was pictured during today’s session and must now be in contention for a place in the team for Sunday’s game against Stoke at the Emirates.

With Pierre-Emerick Aubameyang ineligible for the Europa League, Arsene Wenger will be keen to give the former Lyon man some minutes ahead of the first leg next week.

There was further good news on the injury front as Aaron Ramsey also took full part in today’s session.

He was missing from the Wales squad after boss Ryan Giggs announced the midfielder would be undergoing a ‘small procedure‘ during the Interlull, and thankfully he hasn’t ended up like Mr McGregg, with a leg for an arm and an arm for a leg.

Arteta pleased that Lacazette is generating interest from other clubs

Ramsey and Laca, we’re definitely stronger with them two in the team or coming on from the bench.

nothing can stop LAWNs

except mowers and weeds

With Elneny and Ramsey in the midfield, right?

Then we just need Santi

A real handful. No chance of a clean sheet for whoever we come up against.

Great news! Looking forward to having him back for Europe but maybe also combining with Aubameyang in the league too!

Surely the premier league offers some room for experimentation with two strikers?

Great news. Wele + laca in europa now which is much more desirable.

If he had a arm for a leg and a leg for an arm – what would the hand ball rule be?

Whatever Mike Dean says it is this week?

Thank Bergkamp for his return. This is great news especially when you consider our Europa League ambitions.

We have missed his lack of goals immensely.
Lets hope once he is fully fit he can hit the ground running and quickly get back into not scoring goals like we saw before he was injured.
Although, in truth it was very difficult to differentiate his contribution when he was fit as to when he was injured.
And all for 100 odd thousand a week.
I’m not even going to mention Elneny’s new contract – thoroughly undeserved…

Cannon and Ball and Arse’n’all
Reply to  Me2

You’re more of a buzz kill than buzz killington

Wow, what a Welbeck-Aubameyang-NKetiah-Elneny-Ramsey you are.

Nice 1 lacca..be up in your coming games..

Welcome option to Danny in the Europa.

Where is my santi carzola ?

Could see him regaining his place up front for Europa and Welbeck going wide left, Mhki right and Ozil at 10. But in the league not sure if he still fits in the starting line up

Glad he’s back the less players in that injury room the better.

Perhaps the injury was the reason behind his Lacazest…

Here’s hoping for a more productive rest of the campaign as he started very well.

Pity we still have the same manager

And that is good news.

For all the people on here talking about Laca’s lack of productivity and goal scoring …. don’t forget that for the majority of the games that he started, Wenger was pulling him out around the 65th-70th minute. Constantly not playing the last 20-25 mins of a game can take a lot of potential goals away from a striker, especially with tired legs on the opponent’s defense