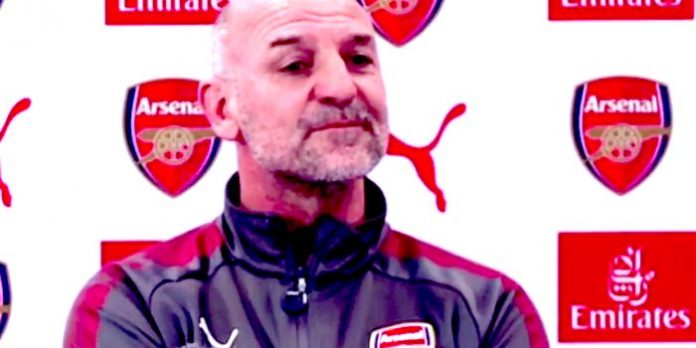 Steve Bould has provided the latest team news update as Arsenal get ready for their first game in over two weeks when they face Stoke City at the Emirates on Sunday.

FA Cup fixture scheduling and the Interlull mean the Gunners haven’t played since the 3-1 win over AC Milan on March 15th, and while some players have been away with their countries, it has provided others with a chance to return from injury related absences.

Jack Wilshere missed the two England games during the break, but Bould revealed he was back in training ahead of further assessment to see if he can play.

Alexandre Lacazette is also back after his knee operation, but his involvement for Sunday is not yet decided, although with a Europa League clash with CSKA Moscow next week getting some minutes under his belt could be important.

Beyond that it seems that the only real absence is Santi Cazorla and that going into the final stretch of the season we’ve got more or less a full squad to choose from.

And for the many people who ask ‘What does Steve Bould do?’, the answer is: really short press conferences ?

West Brom 0-4 Arsenal: By the numbers

Steve Bould out of his comfort zone once again

Didn’t know he was still at the club.

He sits next to Wenger on the bench every match…?

Says someone who never saw steve bould play… if you had you’d know that steve rarely went to ground and when he did he generally took the ball or man, never went sliding by

That was meant to be a joke about an elaborate murder/impersonation kind of scenario.

Loved watching him play in a truly epic defense, hard to see what impact he’s had as an assistant though.

Gazidis testing ground for how the press takes an Arsenal press conference without Wenger.

LOL Steve Bould will be appointed to take over from Arsene in a 5 year deal.