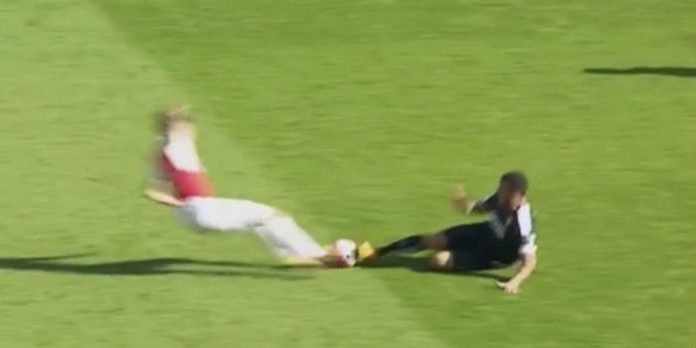 Apologies to the three people reading this who lived in Seattle in the 80s and 90s and who stayed up after Saturday Night Live to watch our own local sketch comedy show, Almost Funny. No, wait, it was called “Almost Live“. Almost Live is the show that gave the world Bill Nye the Science Guy.

Anyway, they had a segment called The Lame List (or what’s weak this week) where they would say things like “passing out before the stripper shows up” and members of Seattle’s heavy metal/grunge community would shout “lame” in unison. This is what your parents did for laughs before the internet, kids.

Enough of that. Here are your week 30 stats:

59 – Tackles by Granit Xhaka. Xhaka leads Arsenal in tackles with 59 this season but he’s far off the pace of the top three tacklers in the League: Ndidi has 125 tackles this season, Gueye has 102, and Kante has 89. Ndidi also holds the ignominious record for most failed tackles with 70 this season. Ndidi and Kante are 65% tacklers, Gueye is 69%. Xhaka doesn’t tackle often but at least he also doesn’t tackle well… he’s made 59/97 tackles for just barely 61% success rate. He’s a lot like Matic, in fact, who has made 59/101 tackles this season.

Please note that I have cheated the scale to make it look more dramatic than it actually is. The reason I did that is because losing 5 tackles a game is actually pretty dramatic but when the vertical scale is set to a minimum of 0 it doesn’t look like much has changed. This is a nearly 23% decrease in the number of tackles per game from Arsenal.

It’s not just tackles, though that seems to be a major problem, Arsenal have a number of poor defensive stats. Instead of comparing Arsenal to all the 20 teams in the League, we should look at the other top 6. Those are more apt comparisons.

Arsenal aren’t tackling as much nor intercepting the ball as much. In 2009/10 Arsenal led the League in interceptions with 22.1. This was a hallmark of Wenger’s defensive scheme: he loves for his center backs and defensive midfielders to step up and win the ball with an interception. In my chart above Interceptions are listed as just 11.5 but I believe interceptions and blocked passes used to be counted together which means Arsenal are intercepting at a decent rate of about 18.2. Down about 19% from 09/10.

And when we add up all of the defensive actions per game (blocks, tackles attempted, interceptions, and passes blocked) of the top 6 teams, Arsenal actually have the most actions with 47.5. Chelsea are 2nd with 47.4, Liverpool 47, Man U 46.9, Spurs 44, and Man City 42.9.

Arsenal’s run-in looks fairly easy and hopefully Arsenal can concede fewer than 8 goals in the final 8. If they don’t this will be Arsene Wenger’s worst ever defensive season at Arsenal.

So, while Arsenal have precious few midfielders who tackle and the tackle and interceptions numbers are down from 2009/10 none of that explains why Arsenal have allowed so many big chances and so many goals. They are basically the same as all the other top teams, so why so different in result?

In a word, errors.

Cech leads the League with 7 errors, 6 for goals. Arsenal also lead the League in overall errors (28) and errors leading to a goal (13). And to add more salt to the wound, Arsenal are also the 2nd most penalized team in the League, allowing 5 penalties this season.

If we remove errors and penalties Arsenal’s “team big chances allowed” drops way down to 37. That’s 6th best in the League. That’s still not great. That’s 10 more than Chelsea and 14 more than Tottenham. But it’s more in line with the defensive numbers we are seeing from Arsenal.

As much as I wish more tackles would equal better defense, the numbers don’t seem to bear that out. That’s not to say that teams shouldn’t ever tackle but rather that there is almost no correlation between tackles, interceptions, blocks and blocked shots and goals allowed.*

So, that’s what’s weak this week. Tackles. I’d like to see more of them, but they won’t necessarily make our defense any better. That might explain why Wenger sells off the top tacklers and doesn’t bring in a “pure DM” despite the baying voices that ask for it.  Mine included!

Tackles may not be that important but knocking off the errors and conceding penalties should be top of the list. Arsenal allowed 18 goals this season off those mistakes. That’s one of the only categories Arsenal are top of the League in.

This season the r^2 for those activities and goals allowed is just .38. Even adjusting for errors and pens it’s still just .38.

i lived in seattle in the 80s and 90s and watched almost live. i am deeply offended, pump the breaks arseblog.

Very interesting. My gut says the errors and penalties arise because Arsenal defenders are left on an island by our “system” which as Wenger concedes takes risks in order to possess and attack. You’re more likely to screw up royally if you are one on one and/or desperately tracking back from a bad position. Another possibility is the alleged lack of specific instructions (jazz Wenger) leading to confused and disorganized Arsenal defenses. Any way to confirm or deny this theory? The value of a DM may lie in positional cover more than tackling. Whatever the reason, it seems like Arsenal… Read more »

He’d have to look at other teams data, but I’d be hard-pressed to believe Spurs, from what I’ve seen, tackle less now than they did in the past.

Whether tackles correlates with errors, I don’t think it’s an either/or situation, both need to be fixed. The most damning thing is the trend. Year on year bar a few anomalies, we’re getting worse defensively. Wenger is spending more, yet we are getting worse. Against all evidence, he continuously sells any DMs we have, converts any academy DM with prospect into a CB (where their errors then increase as they then spend their years hanging around in midfield and causing panic when they get bypassed) and the trend shows there is no indication Wenger is going to change. A basic… Read more »

Five penalties awarded against us, perhaps, but let’s not forget that at least three of them should never have been given.

What about the many that should’ve also been given (Mustafi in particular) but weren’t?

Update: I spoke with Orbinho (@orbinho on twitter) and he said that Opta have done some training and changed their QA around tackles. That’s why we are seeing fewer tackles the last two years for all teams.

That said, there was a downward trend BEFORE the last two seasons at Arsenal and while there are fewer tackles being recorded overall at Opta, you can’t escape the fact that Arsenal, in effect, have several CMs who rarely put a foot in. Ramsey, Wilshere, and Elneny are all very soft defenders.