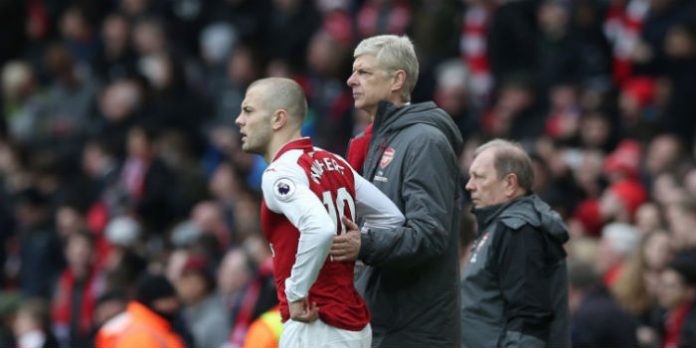 Arsene Wenger says he’s pushing Jack Wilshere to stay at Arsenal but accepts the England international will have offers enticing him elsewhere.

The Gunners have offered the 26-year-old a new contract to stay at the Emirates, however, due to concerns about his fitness it’s suggested his salary will be reduced before appearance and success add ons kick in.

At a time when teammates are enjoying pay rises, it’s given Wilshere food for thought and he’s still mulling over whether to commit.

Speaking to beIN Sports about the situation, Wenger said: “I can only reassure them [the fans] that we want him to stay and we’ve made a proposal.

“After that you accept as well that Jack is at an age when he’ll have offers somewhere else.

"I want him to stay and we've made him a proposal."#Wenger says @Arsenal have offered @JackWilshere a new contract. #PL #AFC #Arsenalhttps://t.co/fPYSahBtaB pic.twitter.com/IvXZCvKTb5

“[Gennaro] Gattuso said the other day he has the technique of a Spanish player and the character of an English player, I think that’s well judged and that’s why you want him to stay at the club.

“Jack has gone through situations where he was long-term injured, you hope basically, that in the next three or four years he’ll be injury free and we’ll see the real Jack Wilshere.

“He went to the European Championship and he basically didn’t play, he came on a few times. Jack Wilshere at full fitness, full powerful is a regular in the English national team.”

Wilshere has had to drop out of the England squad that is due to face Italy at Wembley tomorrow having already missed the match against Holland due to an inflamed knee.

The problem is thought to be minor but with the opportunity to play national team games before the World Cup limited, time is running out for him to prove to Gareth Southgate that he’s worthy of a place on the plane to Russia this summer.

Good player and Arsenal lad, would like to keep him and hope he kicks on in the best part of his career.

[Suspect his agent will be pushing him for a change though.]

Please don’t push too hard. We don’t want another injury

Fail to make England squad due to minor injuries. Not in the World cup shop window so will re-signs for us. Has a storming season after a full summer of rest. Other clubs’ mids suffer burn out after another disappointing WC.
All good ?

They’re waiting to announce it with him sitting on a table next to Oblak and Seri.

Tricky one as he’s an arsenal man but after years of injuries I can see why the club would offer him a ‘special’ contract. In a way it would be sensible for him to just move on and get the contract he wants elsewhere as he’s clearly not happy with what the club is offering. If the club want him to stay and he wants to stay and it’s only about the money then I would think the club could find a suitable solution for both sides. After years of having some long term/regularly injured players which clearly affected the… Read more »

Wish I had a job where I called in sick in the time, still got paid then demanded a huge pay increase.

believe me
Reply to  Mesut O'Neill

Mesut O'Neill
Reply to  believe me

That’s funny (but won’t be too popular round these parts).

You mean you wish you were as good at football as Jack Wilshere? Thanks. For. That.

He’s managed at least 58 games over the last two seasons so the permacrock tag is a little outdated. Also as far as we know he’s not asking for a “massive increase” but is actually fighting an effective pay cut. Neither of those bits of info suit the narrative on here though, clearly…

Hang on a minute there. That comment is logical and evidence-based. You comment like someone who’s neither a troll or a video game superstar.
Sure you’re on the right site?

Would like him to stay but I will not be devastated if he moves on. I never really understood his decision to go to Bournemouth. It seemed like a really odd choice. He is an Arsenal man and is fantastic on his day but I think the club have absolutely made the right decision in offering him a contract with appearance bonuses if that is indeed what they have done. He may go to another club and be injury free but that is a gamble said new club would have to make.

I honestly don’t know if any of the big teams would want him with his injury record. He wasn’t great at Bournemouth, but he’s shown glimpses of how good he can be this year. I imagine he would want to stay in England and not move abroad, don’t think there’s a club abroad that would give him a better deal than what we’re offering. He probably needs to play awesome in the world cup.
So in my mind he will resign with us

Resign = see out his career and finish with us.

He’s will definitely re-sign then.

Np, just trying to live up to my name so felt obliged to comment.

For someone whose first language is not English, you have certainly come up with a marvellous play on words for your user name.

arsepedant
Reply to  believe me

I don’t believe you.

I really like jack. At first, I wasn’t the fondest because he came off as a bit petulant but he was ours so you backed him. Coming back from injury and becoming a father, he comes off as a more tempered adult and would love to have an Arsenal man part of the setup. But part of me still thinks the injuries are there waiting to happen and the deal we have on offfer is probably the best we should do. I love that arsenal gives our injury proned players the backing of these players, a very humanist approach but… Read more »

If he hasn’t signed it yet he’sclearly of a mind not to signit so the only options are to offer him something better or expect him to leave.
I really would like him to stay so upping the offer a little would be fine be me… Whatever the offer was in the first place.

Someone should totally open a sandwich shop named after you

Jack represents the club and has a bit of fight.

BUT the contract issue depends on perception. Clearly Jack feels he brings intangibles to the table that make up for his injury risk in his competitiveness.

Jack’s issue is with injury. He is a great talent no doubt. I wish him all the best.