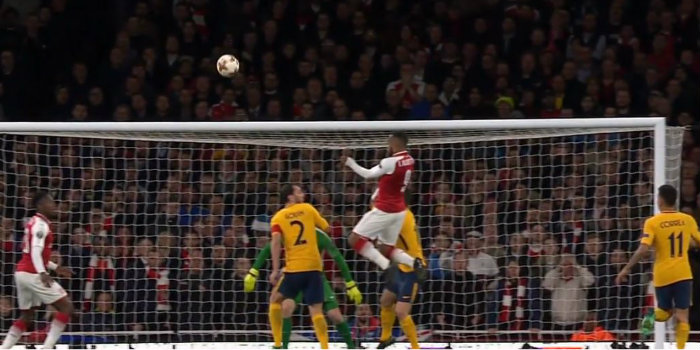 762 – Passes by Arsenal
245 – Passes by Atletico
411 – Final third passes by Arsenal
68 – Final third passes by Atletico
63 – Passes in the Atletico penalty area by Arsenal
13 – Passes in the Arsenal penalty area by Atleti (this is more than just a simple stat showing how deep the team played, Arsenal’s 63 passes in the penalty area meant that Atletico were under constant threat. Any miss kick or failed clearance and Arsenal could have pounced for a goal. Especially threatening were the 11 passes across the box on the ground. Guardiola is notorious for his love of this pass and supposedly calls them “half a goal” in training.)
25 – Key passes by Arsenal
6 – Key passes by Ozil
5 – Key passes by Ozil from open play
3 – Key passes EACH by Xhaka, Monreal, and Lacazette
2 – Key passes by Atletico
42 – Attempted tackles by Atletico
26 – Attempted tackles by Arsenal
20 – Successful tackles by each team (Atletico were dribbled past TWENTY TWO TIMES)
22 – Successful dribbles by Arsenal (7/10 by Ozil to lead all players)
5 – Successful dribbles by Welbeck
7 – Failed dribbles by Welbeck
1 – Failed dribble in the 81st minute which led to a long punt (no pressure by Ramsey), up to one forward, against three defenders, with one defender playing offside and the other two not paying attention, where that one defender hustled back and cleared the ball into his own face, and then the keeper saved the first shot, the back up center back BLOCKED THE FOLLOW UP SHOT, and it still went in.
26 – Shots by Arsenal
10 – Headed shots by Arsenal, which is 25% of all the headed shots they have taken this season in the Europa League and nearly 10% of all the headed shots that they have taken this season in both Premier League and Europa League play, which is a strong indication that this was a tactical approach to the match but which is super duper weird (since Arsenal didn’t play with a bean pole forward) until you look at the stats and see that Atletico have conceded 7 headed goals in la Liga (of 18) and with today’s goal 3/7 in Europe.
6 – Shots by Atleti
4 – Big Chances for Arsenal (Lacazette (hits post), Lacazette missed header ’68, Koscielny miss, Welbeck saved 20′)
2 – Big Chance for Atleti (both by Griezmann in that one play where they scored)
3 – Big Chances missed by Arsenal
1 – Big Chances saved by Oblak
1 – Big Chance saved by Ospina
1 – Big Chance scored by Griezmann. It really can’t be over-emphasized how good it is for your team to get these kinds of shots. Or instead of emphasizing, you could just watch this match and see how Atletico kept space tight in the 18 yard box, forcing Arsenal into headed shots, which were easier for Oblak to save
3.71 – Expected goals for Arsenal
0.91 – Expected goals saved by Oblak (like if he didn’t exist, Arsenal these are the expected goals for Arsenal’s shots on goal)
2.8 – Expected goals MISSED (off target, or blocked) by Arsenal
1.23 – Expected goals for Atletico
0.84 – Expected goals saved by Ospina
2 – Goals Arsenal need in the return leg to go through (assuming Atletico score)
4 – Goals Atletico have allowed at home in La Liga play
0 – Goals Atletico have allowed at home in Europa League play

No coronavirus test for Arsenal players unless they show symptoms

Portsmouth 0-2 Arsenal: By the numbers

Arsenal 1-2 Olympiacos: By the numbers

We are the arsenal. They’re gon get beat at home. We have a penchant for skewing stats. Coyg ?

Obviously, most of these stats were 11 against 10, but we were dominating them even before that. Everything I saw tells me we can beat this team in Madrid. I am not saying we will win, only that the supposed gap in quality is not there; we are at least their equal.

Almọnd
Reply to  A Different George

We ll win in the metropolitan I have this strong belief

PeteyB
Reply to  A Different George

You are right. I also have confidence that we could still do the job. I also have absolute confidence in our ability to nearly get the job done and then Arsenal it right up in the last minute.
Fingers crossed.

Fucking depressing. How can you explain this? Mentality? Bad luck?

I said we had to score at least 2 in the first half to have a good shot. Going to be tough in spain.

Poor finishing (which, if you watch a lot of football, is relatively common for good but not great teams). A strong opponent (anyone who thought AM was going to be easy was either nuts or full of it).

Agree that with a man advantage for 70 minutes at home Arsenal should have scored at least 2 goals. Imagine the reverse: Arsenal down a man 70 minutes away at AM. Anybody think Arsenal only concedes 1? Not me.

Crazy to concede like that, with 3 on 1, against 10 men, and all we had to do was kick it out. But who knows what would have happened if they’d had all their players on the pitch and could have pressured us for much more than that…

Either way we’re most likely out now, but I’m still going to get up at 5am and watch.

The only important numbers are 1 and 1. And the away 1 is more important.

We just need one!

I agree and in the GG era would have almost expected it but this team to prevent a goal? I think we’ll need to score 2 at least!

If only UEFA had ditched their stupid rule earlier we could have had PEA instead of Welbz ?

This game reminded me of the time of Henry and company.They had battered Bolton /Blackburn and yet lost . Of course AM are a different class.
Its the sos ie passand pass and pass to eternity.All AM had to wait is wait for an opportune moment to strike like acobra. Bingo its 1-1.
I cant wait for the season to be over. I have and so do most fans lost faith in the fm.

Still can’t believe we weren’t 3 up by half time. You can blame defending all you want but if you put away those big chances, one little goal away doesn’t matter much.

I couldn’t either. Poor finishing.
But give some credit to AM, they defend well. And they tackle well.

An afterthought: Giroud out was a consequence of Auba in. That move will probably cost us a place in the final ( and CL place).
Olivier would have chopped the AM defenders into pieces in the air,this type of play suits him very well.