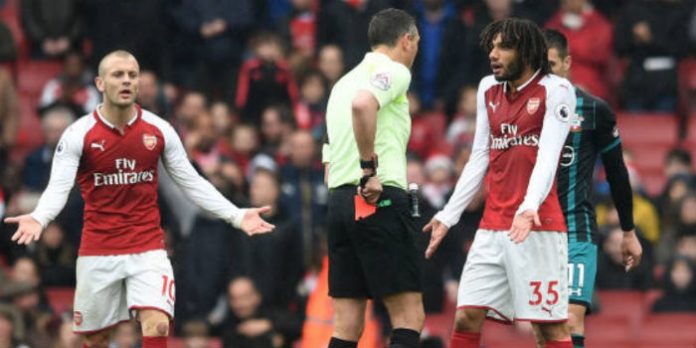 Mohamed Elneny will be available for Arsenal’s next three games after the FA decided that he should not have been sent off against Southampton.

The Egypt international was given his marching orders in the final moments of the Gunners 3-2 win after making contact with the face of Cedric Soares. It looked harsh at the time, although a replay did confirm the contact.

Arsenal appear to have appealed the decision and won. Something of a surprise all things considered, but good news, especially given we’re pretty short of central midfield options at the moment.

A statement from the FA reads: “Mohamed Elneny will be available for Arsenal’s next three games after an Independent Regulatory Commission accepted that he was wrongly dismissed for violent conduct against Southampton on Sunday, April 8, 2018.”

FA hit Operations Manager with fine for half time bust-up

Justice. There were a number of incidents far worse than Elneny on Saturday that went unpunished. The Southampton player who gave Elneny a massive shove was more guilty of violent conduct.

Just imagining Mark Hughes’s face when he finds out about this, he’s probably still fuming about Wilshere deserving to be sent off!

Mark Hughes’s face isn’t something I want to imagine

But what about his face when Southampton and Stoke get relagated. First manager to have a hand in two clubs getting relagated

Completely unexpected. Will you be re-writing today’s blog post?

Blogs, imagine everytime you have to rewrite when you get something wrong…haha.

Blogs wrote that he thought the red was “too harsh” but the Match of the Day 2 programme showed another angle that clearly showed Elneny make contact the face. He wrote “that’s always going be a sending off if the officials spot it, which they did.”

Well I’ll be…! Good news as I wasn’t expecting them to go against they’re precious referees!

Their always sticking up for they’re precious referees

I see what you did they’re

Their they’re, don’t get angry there.

If Arsenal do well in Europe it will help the national co-effient.
If you consider that you can kind of see why the FA have been generous for once

Aren’t the big leagues getting guaranteed European spots from next season, so the coefficients won’t matter?

maybe not for next year, but in long run it’s always better to have more coefficient, no?

One of them is lying!
Reply to  euchan

A Premier League ban would have had no impact on Elneny’s European availability, and although it is good to keep the association coefficient up, with the rule changes from next season the top four associations will automatically have four teams in the Champions League group stages – England are currently second (way off Spain) and miles ahead of 5th place France. Our club coefficient is what we really need to maintain by winning in Europe to ensure good seedings. We should be around the top 10 for the start of next season, however we’ve only amassed about the same amount… Read more »

I thought they got rid of seedings in favour of league placement, or is that just for the top pot? Wouldn’t we be top pot regardless if we win the Europa League?

League placement is just for the top pot, so CL winners and the domestic champions of the 7 top ranked leagues occupy that. The rest (including Europa winners) are ordered via their club coefficient ranking. If (big if) we win the Europa, we would be in pot 2 alongside the likes of Atletico, Dortmund, Utd, either Porto/Benfica, Napoli and two of Real/Shakhtar/Basel depending on permutations. In addition, if we qualify it pretty much stops Sp*rs from getting into pot 2.

I don’t know why everyone’s so surprised to be honest. That decision was a howler. The incident deserved a yellow at worst. I would’ve been surprised had Arsenal not appealed it.

Not surprised about the appeal made by Arsenal but the fact that the FA actually overturned the decision. They almost always stick with the referee’s decision.

A Different George
Reply to  Maniac

Well, remember the FA overturned the red card to Gabriel and banned Diego Costa instead–though Gabriel still got a one-match ban for his actions after he was shown the card. (So, everyone who criticised Jack for ushering Elneny away should apologize, even if Jack did start the whole thing.) Diego Costa and Mike Dean, the memory makes me shudder.

By the rule book it was hardly a howler. Yes, I wouldn’t say it was “violent” but the bottom line is you can’t put your hands on the other guy’s face and that should be a zero tolerance rule. It was a stupid move from Elneny, he put himself where didn’t he belong and left himself completely open to the interpretation of the official.

I thought he was doing the right thing trying to stand over ball avoiding the quick fk. Something we’ve been told we are naive about in the past.

Absolute rubbish. Can we please stop parroting commentator-speak. Players pat each other (even opposition players) on the head or the cheek all the time. There’s no blanket ban against “raising your hands”.

Referees have to assess for foul or dangerous intent, and it’s not an automatic red if use of force was negligible. Commentators catch-phrases and the laws of the game are not the same thing!

A Different George
Reply to  SantiSandler

But whether it was “violent” is in fact the only issue in this case.

Mocking other people’s beliefs… How classy.

I’m very surprised because he pushed the player in the face – i think we’d have been asking for a res card were it the other way around. Just goes to show how odd the FA is, completely unfathomable.

Excellent news. Not having Elneny to call on is just unthinkable imo, given our shortage in midfield. FA being lenient on Arsenal? Wonders never cease.

What a surprise that is.

After reviewing the incident replay link, Jermaine Jenas is a smug little twerp

Every time Jermaine is forced to talk about Arsenal in a good way, you can literally see him gritting his teeth…it’s hilarious!

A truly shocking outbreak of common sense by the FA.

Bet even the FA surprises themselves sometimes.

Well fuck me. This doesn’t sit well with me at all considering where the FA sit on my ‘love to gate scale’

Incredible. Must feel great for elneny

What is this witchcraft? Arsenal get 3 penalties in two games and a red card overturned?

Maybe the comments on here about the anti-Arsenal bias will have to stop for a while. Or is it just that we’re not in the fight for anything this year?

Well I’ll be a monkey’s uncle ?

Good. The worst thing he did was be taller than the other bloke.

Great news, just never expected the FA to do something so … sensible.

Astonishingly rare application of common sense when FA could so easily have hidden behind the letter of the law.

He is, wait for it, not that kind of player.

Well, 7amkickoff did, reluctantly, say that about him. First red in his career, averages 0.5 fouls per match.

I am a little surprised by this. But I suppose if you sent everyone off for what Elneny did in that game, it’d have been abandoned. I still think he’s a bit lucky though. I was counting on it at all.

Ederson seemed to do exactly the same last night and just get yellow, so it would have been pretty unreasonable if elnenys red stood

A Different George
Reply to  daniel

Ederson was a lot closer to violent conduct, though that was a UEFA match, not a Prem officiating team. On the other hand, that referee was more interested in becoming the center of attention than any English referee I’ve ever seen, even Clattenburg (with the single exception of Mike Dean, who should never be included in any comparison because he is so bad in so many ways he throws the scale off). After Salah’s goal, the referee pats the head of a City defender, to console him–I have never seen that before.

Are players allowed to be banned retroactively? For example, shouldn’t Ashley Young be banned for a game or two for his disgusting performance against Man City over the weekend? He deliberately handled the ball inside the box and almost snapped Aguero’s leg.

A Different George
Reply to  Mootilated

If the referee saw the incident in question and chose not to issue a card (or issued a yellow rather than a red), then it cannot be reviewed, at least in England. If it took place out of the referee’s sight then, yes, there can be a retrospective ban; it has happened several times this season.

FA lenience just show how far we are from competing to PL title…would have this overturn been possible during Fergie-Wenger time 2000-2006? not a chance

Some common sense at last. Ridiculous for Elneny to be punished for a common scuffle between players. If anything, we are somewhat fortunate Jack did not get penalised but Stephen’s actions warranted a straight red. Good to have Elneny BC if we say lose Granit to illness, Jack to a niggle, we will be out of sorts in midfield. Still the issue has ALWAYS been we (Wenger) have not done enough to provide for depth of quality in the engine room and this has more than anything-else cost us over last 3 or 4 seasons without Santi. Wenger continuously tries… Read more »

And for once the FA behaved.