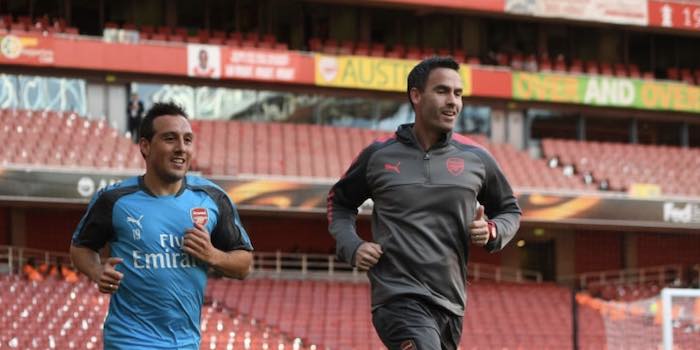 Last night we were treated to a bit of a surprise when Santi Cazorla was seen training at the Emirates before last night’s 1-1 draw with Atletico Madrid.

The last time the Spaniard played for us was in October 2016, in a the 6-0 Champions League win over Ludogorets, and his injury problems since have been well documented.

Speaking about Cazorla after the game, Wenger cast doubt on the possibility of a final swansong in red and white before his contract runs out this summer, and said he was unsure of what the future would hold for the 33 year old.

“He feels well,” said the Arsenal manager, “but he needs a full preparation and pre-season to try to come back.

Much will depend on who the new manager is, and what the prognosis is for Cazorla’s recovery.

It’s not inconceivable that a player of his quality could make a comeback somewhere, but after nearly two years out of the game, you can’t help but suspect it might need to be somewhere else.

The warmer climes of Spain might well suit him for the final stages of his career, but whatever happens and wherever it happens, I think we’d all wish him well.

Welcome Cazorla! Arsenal please give him a year contract and let’s see how it goes.

I think he’ll be gone this summer. Frees up some wages to hopefully get in a top class midfielder to shore it up a bit. We’re a bit limited on the creative end.

A new manager always bring 2 or 3 into the starting 11. That looks bad for our Santi and even one or Iwobi and Welbeck. I Hope he keep Kolasinac.

Hope the new manager ties him down even if on a ‘Pay as you play’ basis. A player of his quality will be needed by us somewhere down the next season.

Considering that the rumoured war chest is closer to 50 million rather than 150 million, we need to be smart.

With a new midfielder, defender, goalkeeper needed, it wouldn’t make much sense to further trim the squad when it already looks so bare.

Pay as you play is a great idea

For his quality and attitude, he’s an Arsenal legend in my eyes

Absolutely. Even if he doesn’t make it back to the same level I’d love to see him get a farewell game, even an honorary substitute performance in preseason. Emirates cup game perhaps?

So good to see the little magician runnin’

could be for good, depending on the new manager