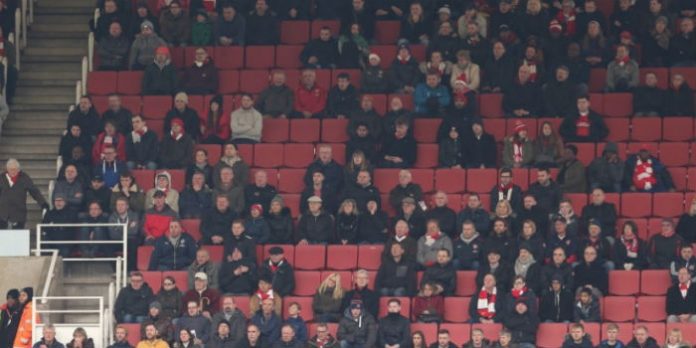 Arsene Wenger expects the Emirates to be full when CSKA Moscow visit on Thursday evening even though his side secured their fourth consecutive win – a 3-0 victory over Stoke City –  in front of swathes of empty seats.

Despite the majority of tickets being sold, the stadium looked no more than two thirds full as a televised ‘dead rubber’ game against unglamorous opposition on a major religious holiday proved far from tempting.

Poor weather and a clash with Mother’s Day were blamed for huge no-shows against Manchester City and Watford, this time, the boss suggested that playing the match on Easter had played a part.

“They will be back on Thursday, don’t worry,” he told his post-game press conference.

“It’s explainable by the fact that it’s Easter. It’s a family happening where people go away and it’s a fact that we don’t think about a lot in the Premier League.

“There’s also the fact that we had a break. In the Premier League, in the last two or three weeks, we’ve faced that problem. It’s just down to the fact that we’re not fighting for the championship. People know that will not change now.”

Asked whether the low attendances will take a toll on the global popularity of the Premier League’s product, Wenger was quick to point out that Arsenal’s home form, even in defeat, has been pretty good this campaign.

He said: “No, at home we’ve had quite a strong season. Maybe we’ve been one of the strongest for a long time.

“I think that’s a combination of quality and number of goals scored. The quality of the games we’ve produced here, even the two games we lost at home – against Manchester City was just after the League Cup final and the 33 shots on goal we had against Manchester United – we put in outstanding performances.

“It’s away from home that we have lost our opportunities and the fans are disappointed by that.”

As far as we can tell, tickets are still available to Arsenal members for Thursday’s match – if you’re looking for one, check out the official website. It might be worth popping along given this is our last chance of rescuing anything from the season.

“It’s explainable by the fact that it’s Easter. It’s a family happening where people go away and it’s a fact that we don’t think about a lot in the Premier League.”

Easter is every year and it’s always been full even though for the last 14 years, by Easter we’re already out of tile race lol.

Arsene IS the problem

Let him continue in his world on make-believe.

Not sure why this is getting dislikes, you’re right. We’ve played over Easter before, we’ve played New Year’s Day, we’ve played in snow. But it’s never been so empty

The problem is that there. Is a Minority of supporters who are looking for a scapegoat for the performance in the league this season — 4 finals in 5 years , last 8 in Europa , 3 trophies in last 4 not enough for them … the tough nature of the PL should not be underestimated … ARSENAL ARE STILL 1 of only 4 teams in the last 20 years to have won more than 3 trophies — that fact needs to be appreciated.

It would be nice for a title challenge though. And that’s never going to happen under Wenger so I guess the club needs to decide whether they are happy with domestic cups and Europa League participation or whether they want more. Kroenke I feel couldn’t give two shits so the Wenger bus rolls on.

I wonder what our narrative will be when Arsene is gone and we aren’t challenging for the title. Who will we turn our ire on?

I wish there were 20 Arsene Wengers who coached teams to play football, not to win at all costs. I wish there was a salary cap to maintain parity and force all teams to work with the same resources.. then and only then could we really see football the way it was meant to be played.

That’s the thing though – we no longer are even competitive in the league while city, Liverpool and even spuds play much more attractive football. The first 60 minutes of the game yesterday was beyond boring to watch even at the Emirates

Yep, now we have the 6th place trophy to fight for! Happy days.

Sorry, but this simply has not been reported right. Yes, he mentioned Easter, but before that he actually addressed the real problam fair and square:

“It’s just down to the fact that we’re not fighting for the championship,” he said. “People know that will not change now.

I guess our league position causes excitement to dry up. It’s all because of AW

It’s all because of spoilt brats. Twenty teams play in the Premier League, and hundreds more in the lower leagues. The supporters of most of them know that they have no chance of winning anything important. They still go and support their teams. Our bloody fans though? Entitled buggers EXPECT to be winning the bloody Premier League every year and nothing short of that is acceptable. The moment things go wrong with their vision of their perfect team they start throwing their toys out of the pram. They know bugger all about being a proper football fan.

Of course, Emirates should be full for the club’s first European QF in a decade. The club’s supporters are unhappy and disgruntled with the direction of club and the empty stands are a sign of that. I fully endorse this protest. However there are plenty of games in which this protest could be done and no need to have that happen on Thursday.

Soulless, plastic shell of a club.

I was at the Milan game and it was the best atmosphere for a long time, can’t get a ticket for the Moscow game. Hopefully everyone there is as supportive as the Milan game, the team needs us. The club need to start re-looking at ticket prices for games like Stoke, it’s just not worth the price they want to charge, and the whole ticket exchange system needs looking at, just because three tickets up in the gods haven’t been sold nobody can put a ticket on the exchange. Europa games have been good value for money and good fun,… Read more »

I think apathy has just engulfed the fan base. I know it has with me. Living in Belfast I try to get over 4 times a season. I’ve been 3 times so far but I don’t think il be over before the end of May. I just don’t see the point of going to a match with nothing at stake. I can’t go midweek otherwise I wud have gone to the Milan game.
Hopefully change will happen in the summer and I can get over 5 times next year!

Hah i live in Belfast though I’m from Brasil originally, but man I find it hard to locate many Arsenal supporters. Have you any tips mate, maybe a fan club or an Arsenal bar kinda thing? My reply to ppl in Belfast asking me if I like football is ‘Yes 100%, and you? Yeah? Sweet, Liverpool or United!?’ haha does my head in mate. Is it a geographical thing or? Honestly would love to be in a bar filled with Arsenal fans on Thursday night u know it’s boring watching by myself man, so if you can help a brother… Read more »

The absent fans were abducted by aliens.

I’ve got two season tickets, always used and my kids have told me I can’t go Thursday because they are having them. Seriously, anyone got a spare?

I would have gone but I was recovering from a chest lurgy with a nice healthy cough to go with it. That and no decent trains into Euston. I would mostly have been annoyed due to all the goals going in the other end because Stoke did what United did and opted to play towards their fans in the 1st half hoping it would unsettle us, no doubt. I would have gone to see Aubameyang and Lacazette link up but mostly to see Aubameyang for the first time. I’ll be there Thursday for 3/4 of the game as I will… Read more »

This isn’t school. You don’t need to explain to the teacher why you weren’t in class.

Dont get me wrong, but I dont need those ‘fans’ sitting there with all their negativity poisining the atmosphere. Stick to your club in good and bad times no matter what happens

The team’s performances impact my interest as a supporter abroad. I’ve canceled trips to both London and New York because I couldn’t see throwing my hard earned money into a kroenke sized hole that doesn’t appreciate the fans in the slightest.

Pity that some people like the guy above you… coachcriz…. does not see your point…. coachcriz obviously has no issue with the club mugging him off while he funds kroenkes pockets for the privilege.

ha why would he think that , the way we play he is lucky anybody turns up

As a famous man once said, “you cannot charge fans for caviar and serve them sausage instead”

should get the difference back.

No chance top 4, so we have fans apathy and squad rotation in the league. Expect a strong finish to the league season. That is typical Arsenal.
If we finish below Burnley, Arsenal fans everywhere are going to take so much more shit. Get above Chelsea and at least we have some come back.
What I am saying is – it still matters.

I’m not sure if it will be full on Thursday, recent events and the reputation of Russian fans are sure to keep some people away

I have more faith in an Arsenal steward than any idiot politician, if i had a ticket I’d be there. Also the Russians aren’t going to let any harm come to out travelling fans with all eyes on them before the World Cup. Come on you Gunners!

Yay! Tickets on the exchange and just got one!

Certainly hope to see some of these errant fans support the team.

We still have a lot to play for particularly on Thursday nights.

Massive europan trophy awaits us even if its a secondary one.

we have NEVER been a powerhouse in europe so if Wenger can deliver this and along with it sneak back into the CL yet again, it is a still a great feather in the cap regardless if he should choose to bow out with it or aggravate some fans for another year.;)