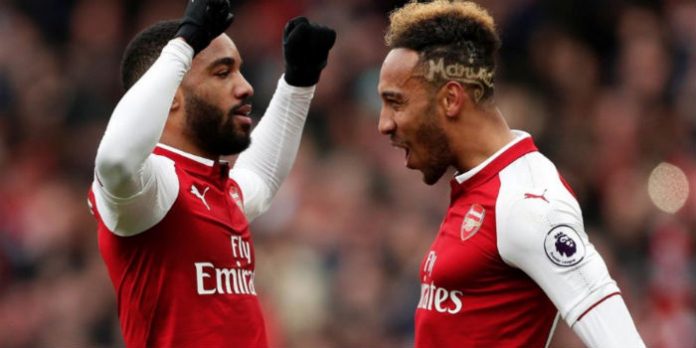 Arsene Wenger thinks Alexandre Lacazette and Pierre-Emerick Aubameyang have what it takes to play alongside each other after the France international scored on his return from injury to help Arsenal to a 3-0 win over Stoke City.

The France international won and converted an 89th-minute penalty in an impressive cameo off the bench after Aubemeyang had put the Gunners in a commanding position with a spot-kick of his own and a smart finish from a corner.

The Gabon international might have helped himself to a hat-trick had he taken ownership of the second spot-kick, however, he was happy to defer responsibility to his teammate knowing a goal might be a timely confidence boost.

Asked in his post-match press conference if he was surprised by Aubemeyang’s generosity, Wenger responded, “That shows well the state of our society, because when people are generous, we are surprised!

“No [I wasn’t surprised] because I know they have a good understanding. I like that because it can only make the team stronger. Lacazette came back from a long injury. I think it’s great. Would you have done it? I’m not sure! ”

The boss was also optimistic about the possibility of playing Lacazette and Aubameyang alongside each other in the future with the latter having a past in a wide position.

“Yeah, I think Aubameyang played a long part of his career on the left, at St Etienne, and in the first year at Dortmund [with Lewandowski], he played on the left. After, when Lewandowski moved to Bayern Munich, he played centrally.”

With Aubameyang cup-tied in the Europa League, Lacazette will challenge Danny Welbeck for a starting berth ahead of Thursday’s quarter-final first-leg with CSKA Moscow.

The England international apparently picked up a back problem today but it’s too early to say whether the Frenchman will take his place.

“I don’t know. I will have to wait a little bit before making that decision.

“He’s still lacking a bit of competitive edge. He’s been out for two months, he worked hard, but he still lacks a fraction maybe. In training, he looks sharp. How long can he last in a game? I don’t know. He certainly needs one or two more games.”

Aubameyang on the win, scoring and building confidence

Nice orgasm to have

Where are you coming from?

I love the idea that you wrote “option” but it got auto-corrected to orgasm because your phone knows which one you use more.

depends on which hand he typed with, hahhaha!

Meaningless games should give us a chance to experiment up top and in defence. Other Niles as a midfield there isn’t much tinkering to be had.

Yes brilliant! with Welbeck on the LW and Mkhitaryan on RW of the 5 !

Nope definitely not that

The first half was “diabolical” 15 stray inaccurate passes within 10 mins ! Most of the game was Rubbish ! Aubamayeng having No service decided to run back to help in defence!

Only the introduction of Lacazette as No9 with Auba on the Left brought a semblance of sanity ! Auba is an amazing player and He is fully aware of it self confident and the “comradeship & family”generosity he extended to Lacazette emanates from his African Culture and mature foresight!

Zero question that Lacazette should start ahead of Danny if fit. I don’t know if he was even serious there. Lacazette presence on the ball was great to see today. Strong, skilled, and confident.

Think Laca could work as a CF behind Auba if we ever went that way.

The first quote by Wenger is why he is so endearing to fans even today when his managerial abilities are on the wane. Demonstrates how intelligent the man is.

Contrast this with some narcissist who goes on with some drivel glorifying himself while putting others around him down or nonsense like “I have nothing to say.”

Everything that comes out of his mouth is either a moan, condescension or utter anti philosophical garbage trying to sound intelligent.

I said it a while back and i’ll say it again. I would love it if we get another top striker in the summer. Someone who is CL level like Lewandowki or Benzema. We can play Auba wide and Laca as second striker (linking up with midfield and supporting the new CF) The only downside to that is one of Ozil/Mkhi have to sit out to give defensive stability. Goals win you games. We should build on our strength and not be content with Auba and Laca. Top players can play with anybody. Imagine a core of Aubameyang, Lewandowski, Lacazette… Read more »

I agree, we should sign Lewandowski AND Benzema and then to improve our defense buy De Gea, Neuer and Buffon.

The Obafemi Martins as back up ST, Kalou on the wings, Samba in defence, etc.

Romford Pele. There is no logic behind your sarcasm. You can’t play 3 keepers at the same time. You can play 3 strikers. A target man, a wide striker and a support striker. Also, I said Lewandowski OR benzema. If Liverpool can play mane, Salah and firmino then why shouldn’t we play 3 strikers. We should recruit in defence but if we don’t add another top attacker next season then we’ll never do it for as long as kroenke is at the club. We have top players on long term contracts. Ideally we should recruit more top players next year… Read more »

Can you give me the name of your weed guy lol

aubameyang, Lacazette and welbeck, we need to get these to work first.

how many times do you need to be reminded just because a player ha s a fantastic track record (“world class”) doesn’t mean he will fit in to our system.

We need several other key areas to address first as priority.

Also jack and midfield needs reinforcing or replacement or both.

Wide area needs work before we add anything up top.

What if we sign Meyer for free, a CB for 30 million and benzema for 35.
We have back up in wide positions with Welbeck, Mkhitaryan and Iwobi.

I think a lot of us are thinking 2 up top and not one on the wing when auba and laca play together.
Maybe ozil right, elneny at the base, ram or xhaka playing alongside him to keep things tight and secure, eith micky playing the CM/left midfield role

The midfield is the key issue in order to support the two up top. Elneny is not entirely the answer. Still think we need a better option come the summer. Granit is better than Elneny influencing us going forward but prone to lapses at the back. Its a tricky balance at the moment given what we’ve got. Also feel we lack genuine wide players to play 4 across the back. One of Welbeck, Aubameyang or Lacazettte invariably have to move wide to provide some support or Bellerin has to push up with corresponding issues behind him in the space vacated.… Read more »

Auba is a striker n shouldn’t be put on the wing to accomodateaca bcos he can play there…the best plan to me would be to play Laca directly behind Auba nd get a good winger during the summer who can dribble+cross/pick a pass in d box e.g Mahrez n play Ozil as 10…Auba shouldn’t be made another Podolsk pls

It certainly looks as if Wenger is attempting to play a variation of 4-1-3-2 that morphs into a 4-2-3-1 or indeed a 4-5-1 defensively. Its a fluid formation with Welbeck or Lacazette swinging between second striker or wide pposition. At times it looks as if Aubameyang also shifts wide left side to allow Danny or Lacazette to go central. Interesting if we can get it right. It looks as the midfield we set up with in jack, ramsey and elneny struggled to create as sharp a push going forward. When Lacazette was introduced for the hard working but less effective… Read more »