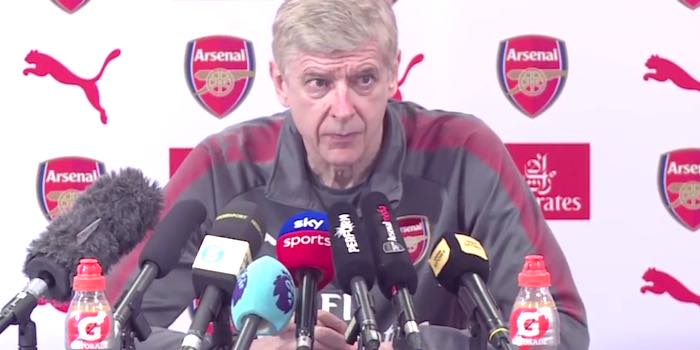 Arsenal face West Ham on Sunday in the Premier League, the game before our semi-final first leg against Atletico Madrid, and Arsene Wenger has provided the latest team news update ahead of the game.

There are some ongoing issues for the manager to deal with, but there was potentially good news about Henrikh Mkhitaryan and his return.

Speaking to the press this morning about the fitness of the players, Wenger said, “We have some uncertainty about Wilshere. It’s a small problem with his ankle.

“Mkhitaryan is not back, and Ospina is available again.”

The manager was asked about Aaron Ramsey, who suffered a nasty cut in the 2-2 draw with CSKA Moscow last week.

“He has not participated in full training but he is practicing in non-contact,” he said, “but he’s available for Sunday.”

As for the Armenian international, doubts that he was going to miss the rest of the season seem to have been dispelled.

“Mkhitaryan is running again,” said the Frenchman. “We has to progress him in next 3-4 days to see how much intensity we can put in his training sessions.”

And on when he might play again, he continued, “Possibly Thursday, at the earliest.”

Wenger also hinted he’d play a strong team against the Hammers despite the upcoming game with Atletico the following Thursday.

“I rested some players after Moscow, so they will need a game,” he said. “It’s not so much rest, but preparation.”

Roma extend Mkhitaryan loan, with next season a possibility too

We could even be behind Burnley after this evening, so need to win, hence need a strong team.

Good news on Aaron and Mkhit, need them both.

Aubameyang up top with Nketiah as sub or second striker.
But not Lacazette. We need him fresh for Atletico

Auba and Laca can only be fitted with a 4-4-2. but we can’t fit that in our system can we?

4-3-1-2 as well. But two up top doesn’t seem to be an option in Arsene’s playbook anymore.

holding instead of chambers at cd whole day everyday.

“We have some uncertainty about Wilshere. It’s a small problem with his ankle”………..and a major problem about his current form

Wilshere has SMALL ankle problem ? He will be good for England in Worldcup though.

And a problem over his unsigned contract.

“We have some uncertainty about Wilshere. It’s a small problem with his ankle” ………..and a major problem about his current form.

I thought it was clever the first time.

I thought it was clever the first time.

Would rather we played with a stronger team than the one against Newcastle. We can’t just rest all of our better players every week especially when some are earning £350k a week.

Save Mhkitaryan for Europa. He may be critical for us against Athletico. Deep midfield options as per usual very limited with Ramsey still out. ELneny and Granit are frankly only options. Mhkitaryan IMO can role into deeper position for us if needed with his wisdom. Saw these clips of young (21) Tanguy Ndembele on loan at Lyon from Ligue 2 Amiens. Goodness knows how to pronounce his name but that seems to be our recent trend for the shirtmakers and announcers… Anyway looks impressive, with strength, pace and superb tekkers to keep the ball. He turns and drives at the… Read more »

We’ve got the fuck-wit Lee mason running the game on sunday…
Not the worst option but he’s usually down to Mike Rileys standard..