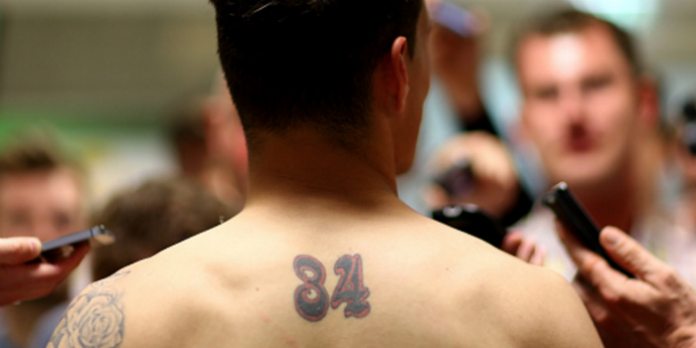 We know you love a squad number story. We don’t know why…we just know you do.

So, without further ado…Arsenal have confirmed that next season the following players will sport new digits on the back of their god-awful new Puma kits.

So that’s a new Seaman, Dixon, Vieira and Marouane Chamakh without spending a penny.

Kudos to head coach elect Unai Emery…such a thrifty slight of hand must moisten the loins of Ivan Gazidis no end.

Chelsea 4-1 Arsenal: By the numbers

Cech: The players didn’t deserve this

So, forget about a new goalkeeper already.

Does this possibly mean cech is staying and ospina could be in the way out? (Trying to read as much into this as possible because I am desperate for some news on our goal keeping situation moving forward.)

Blogs, you did a piece back in March I think regarding Sanllehi keen on getting Oblak, and with reportedly low budget, what do you think are our chances of getting him??

I would rather spend our whole budget on him, he wants new adventure, courtois refusing to sign contract extension at Cheshire, the way he stopped all the shots by our players, he might be our best bet to get back in champions league

I would rather we buy 2 Cb and a commanding mid with our tiny budget.quality over quantity.Next summer splash most cash on an elite GK instead of going for leno,butland etc..

good to see jacks kept his no 10 shirt, could be interesting

All those Xhaka fans will have to cut out the 29, buy fabric and sew in the new 34. That is slow and tedious work.

Exciting times for Elneny I feel. Emery has made less talented players (e.g. krychowiak) thrive in his deep lying defensive role and his new contract and number for me implies the incoming manager + DofF have a lot of faith in him

As much people want to hate elneny for r not being Pogba, he’s a good player who works his ass off. Maybe he can turn him into Nzonzi

Cech No1….. give me fucking strength.

in fairness, Cech was a number 1 and wearing the number 33 – I am not saying we will get Oblak but he wears 13 currently for Atleti so numbers don’t mean what they used to…..that being said, I hope Cech isn’t our starting keeper for next season

Strange that Xhaka takes a higher number than he had previously and Elneny is number 4. Can we take anything from that or did Xhaka pass it up? I do like Elneny a lot and, given his improvement this season, next season could be a big one for him. Cech being number 1 should have been the case for a while but now. With him clearly on the decline, we need a new keeper ahead of him. Looks like it’s not going to happen now though… Who knows, maybe we’ll get in a new first choice keeper with π (pi)… Read more »

Xhaka has a tattoo of 34.His first number as a P.F and also his brother wears it for basel.so not a surprise really.

I believe you’d also want to say, “Sleight of Hand”, no?

Idea : lets have the entire squad given new, psuedo-random numbers every year. There could be a UEFA style draw, with each squad member being given a number, and one pot drawing out the number the player had been given, and the other pot having the actual player number, that they get to wear on their backs. The event could be sponsored, and celebrities could draw the balls, such as Simon ‘Simes’ Bates, Nigel Havers or Dale Winton.

Time for Bellerin to kick on and become the world’s best RB. He can do it.

He’s plateaued a bit this season but that’s no worse (and actually better than many) than the whole squad, hopefully fresh ideas and ideally some actual competition for his place will see him kick on now

He was pretty awful this season, especially in the two Atletico games, no point trying to tart it up.

But he is young, talented, and deserves support and a chance with the new man, whoemery he is.

Maybe a season with an actual quality right sided player in Mkhi will help with that. He’s been asked to run the entire right flank himself and get back to try to mop up Mustafi’s over committing all season.

no he cant, he is a right back who thinks he,s a right winger

Xhaka is moving away from the Chamakh squad number not to it.

They look as new signins to me.

Give özil the 10 already.

Wouldn’t have happened on Vic’s watch

I threw up in my mouth when you used “moisten”, “loins” and “Gazidis” in the same sentence.

Granit clearly has a thing for the number 7

how wise, you give eleney number 4, but you can Xhaka 34 despite all the meaningful goals he scored
Give monreal no3, he deserves it