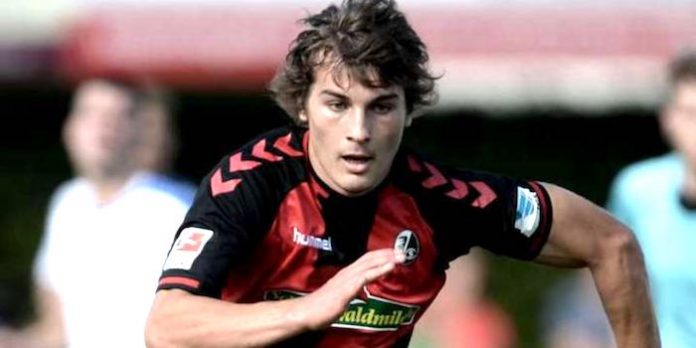 Arsenal are in talks with Freiburg over the transfer of Caglar Soyuncu.

The Turkish centre-half joined the Bundesliga side from Altınordu F.K in 2016, and has impressed during his spell there.

He’s a player familiar to the Gunners new Head of Recruitment, Sven Mislintat, and would become the German’s second ‘find’ if the deal goes through.

The former Borussia Dortmund man was responsible for identifying young Greek defender Konstantinos Mavropanos who joined the club in January.

Initially earmarked for a loan move, he stayed and had two impressive performances towards the end of the season before making himself a true Arsenal man with a straight red card against Leicester.

Media reports around Soyuncu have suggested a fee of €35m, but with a restricted budget this summer and the need to bolster more than one position, it would be a surprise if Arsenal were to pay that much.

The 21 year made 28 appearances for Freiburg last season, scoring once, as well as picking up one yellow card and one red card.

Whether it goes through or not remains to be seen, but we know there are talks between the clubs so we’re giving this one a pretty low rating on our Poo-o-Meter.

Absolutely nothing would surprise me at this rate, I may well put a cheeky little £100 on Arsene finishing next season as Arsenal manager

the only sam is nelson
Reply to  Spunky cleaner

Hah I suspect AW will be telling journalists “I always respected my contracts” at his press conferences wherever he ends up when asked “Arsene – the crisis at Arsenal, are you the man to save them?”

The real question is which club’s press conferences will he be at? Could be anywhere but not in England, although a £100 bet on it being abroad will probably net you a £1 return

I suspect one of Holding/Chambers/Mavropanos will be going on loan.
I’d like to replace Mustafi but he is the only experienced centre back we have.
Also perhaps he might do well under a new manager.

I can’t see us buying two centrebacks this summer.

I suspect the Europa League will be a reserve competition again next season, and given how short we are on numbers at CB, I imagine we’ll keep all three at the club until Jan

Oh yeah. That is sensible.

Chambers can cover right back too, along with AMN will mean we probably don’t sign a specialist there

That’s really a shame, IMO. I understand that not many established players are going to want to come in and sit on the bench behind Bellerin, but he could do with some real competition. Chambers and AMN both have great potential, but RB is neither of their primary positions meaning Bellerin will continue to be perennial first choice. Let’s try not to run him into the ground.

I know this might sound crazy but I would really like to see Chambers get an extended run at CB. He hasn’t let us down there as of yet and lets be honest he is probably our best option there at the moment

But he seems so weak one on one. Wouldn’t want him against the top attackers in the league

I’d like to see him sold. No pace, not strong enough, not tall enough. He’s a Mustafi clone in training. We missed the boat when CP offered 20 mil last summer.

I will be amazed if any of them will go out on loan.

On another note, if this guy signs, we will add another handsome face to the squad, which is already the best looking one in England. He looks like the love child of Sead Kolasinac and Jens Lehmann !

Chambers isn’t a kid anymore. He started young, but really it’s time for him to be breaking in.
He’s looked really good in recent months. I would get at least 1 CB in and use pre-season to decide between him or Mustafi as starter. If he shows to be the better of the two, we then sell Mustafi to raise funds. I think that project is coming to a close.

Coming to a close? For me, that project came to a close in January against City in the Carabao cup finals

Like the look of this guy. Would be a good sign re-Sven if we got him as he seems highly sought after. A young Turk-Greek central defensive partnership would certainly be interesting! And another tough-looking character to add to Dinos and Sead. No bad thing.

‘Turk-Greek central defensive partnership’
There would have to be a UN patrolled peace line down the middle of the pitch.

They will be a Cypriot pairing then

Question is, do we actually need another young defender with potential or is this just a sign of the market we’re shopping in now?

I’d like to how much truth there is to this ‘restricted budget’ rumour doing the rounds. The stories of £50m to spend I’ve dismissed in my head as absurd for the 6th richest club on earth. These days £50m at least is about the budget of a PL mid table team.

allezkev
Reply to  Me So Hornsey

The last thing you really want to do, is tell everyone how much you really intend to spend, it only encourages agents and selling clubs to inflate prices.
These £50m rumours aren’t bad in themselves as they keep things at a sensible level.
Let’s see where we are in August before judging…

Enigma
Reply to  Me So Hornsey

If it is 50mil it could be because of the ozil contract, aubameyang fee and wages and we need to tie down key players to contracts this summer.
But we should easily be spending much for than that.
Kroenke out.

Mpls
Reply to  Me So Hornsey

A limited budget worked just fine for Moyes at Man U.

And a significantly increased one for Wenger in the last 2 years worked wonders too.

My point is bringing in a new manager after a long term manager with such a big footprint within the club and saddling them with insufficient budget is probably not paying attention to precedent.

Take a moment to revisit the Moyes term at OT.
Clearly Sarcasm.

Change is exciting. It’s a lot of money but 1. He isn’t Mustafi and 2. If he plays for a long time or we end up selling him for some crazy fee down the line it’s all relative. Take this over Johnny fucking Evans any day!

Feeder club FC… Signing young players and educating young managers so they can then move on to clubs with actual ambition Pure banter from Arsenal. Holding, Chambers, Soyuncu? Mavropanos, And Mustafi for them to learn off…. Someone suggested a couple of years ago that Arsenal could be a social experiment? At the time I thought it was quite a funny joke….. I’m now starting to believe this is more than likely the case… Unite the fan base, only to rip an even bigger line through it just weeks later. Would have been a big job for an experienced manager, But… Read more »

Based on my advanced scouting knowledge of Soyuncu (read: I watched his scoutnation highlights on youtube), I think we’ve identified a gem here. Quick feet for a central defender, not overly physical but very athletic, good dribbler but never gets too carried away. Clearly if he’s costing this much then other teams are after him. I suspect this is the going rate from here on out for any promising U-23 defender with any first team experience.

A Different George
Reply to  Huss

If he really costs €35m, he may be a gem, but he’s not exactly hidden.

Timsh
Reply to  A Different George

He’s not worth that much and I’m sure we’ll get him for minimum €10m less, if we signed him. Add-ons not included.
Germans are just trying to, rightly so, milk the English cash cow

There are videos on Youtube that make Andre Santos look like Paolo Maldini, so let’s not get carried away yet…

Before or after Maldini turned 45?

Hi Blogs I was just wondering if there will be a review of the players who have been out on loan during the season and maybe what future they might have with us?

Found this about Marc Bola and to be honest I didn’t know anything about him but it was well worth a read and gave me some knowledge about the player.

Thanks for the link.

It is actually believed to be somewhere between 20 million to 25 million Euros.
Makes sense to leak to the press huge sums because it means our rivals will have to deal in an inflated CB market.

Welcome to the New Arsenal.

Think we should snap him up – this guy won the award for most umlauts in the Bundesliga, one of the most competitive umlaut leagues in Europe. Just think what he could do in the prem.

Would be a good signing. I like the idea of buying early before getting quoted Varane prices. Still think we will get Abdou Diallo as well or instead

OMG, he looks like a young Baresi. I’m passing out… http://fanpagepress.net/m/G/gaetano-scirea-1.jpg

Restricted budget my fucking ass. I fucking hate Ivan and Kronky Kronk. They are destroying our club, we’ve spent nada since last summer if you check the balances. What the fuck is this?

1) Without firmly understanding the needs of the squad or the new incoming manager. This new set up is independently deciding what we need to little understanding of squad balance. 2) Another 21yr old Cback? 3) Before you even think of replacing Mustafi, think of the wear and tear on Koscielny and then think how half baked Holding and Mavropanos still are. 4) The squad is filled with OK players. We no longer have the exciting stars of the future. You look at world cup and name me one Arsenal player that you would say will set the wold on… Read more »

With regards the farcical player rating for end of season : How Mustafi rates lower than Chambers or Holding is beyond me. Those two hve also had blemishes this season. I would say Chambers has quietly improved over last 5 matches but not spectacularly. Granit has also improved over last 12 matches defensively but rates lower than the limited Elneny who has also had his fair share of mistakes and being too easily pushed off the ball. You really have to watch those matches again to have a more balance view of the squad. Monreal has not been that consistent.… Read more »

Phew, good news – I just checked and nobody at the club uses Arseblog’s end of season player ratings in deciding which players to keep/replace.

I hope that puts your mind at ease.

We do have 4 “semi”-young CBs plus Kos and since the next year would be experimental by definition, I would try to test them. (Actually this is an opinion I read on a comment somewhere.) The real riddle for me is the midfield. I cannot see how Ozil can play with Xhaka successfully. And Ozil will not be sold. Therefore I would let Granit go to replace him with someone like Fabinho or N’Zonzi or a another tough-moulded DM with high energy levels (Le Coq, I miis you too). AMN has the physical attributes but I would not give him… Read more »

35m….if he were that good Bayern would have already snapped him up for half that.

A Turk and a Greek in center half … what could go wrong?

I think that arsenal should sell mustafi .why because he makes bad mistakes