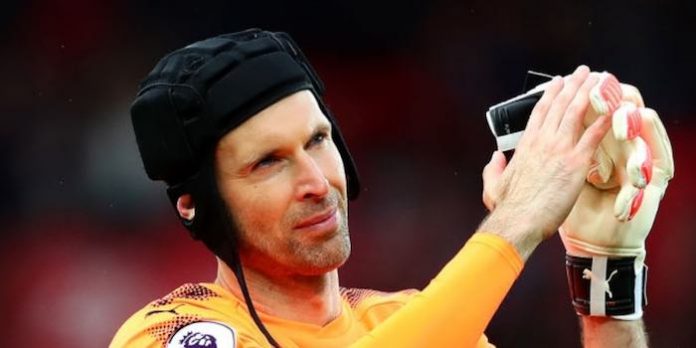 Petr Cech says he’s always wanted the number 1 shirt at Arsenal after it was announced he’d be wearing it from next season.

It was one of four squad number changes which will see him change from 33 to the traditional goalkeeper’s number, but the fact it belonged to Wojciech Szczesny complicated matters the first couple of seasons, and then last year we were apparently unable to do anything about it despite selling the Polish international to Juventus in mid-July.

Speaking about the change, Cech said, “I already wanted number one when I came but it belonged to Wojciech Szczesny at the time.

“Last season when he left, it was at the last possible moment so I couldn’t get it either.

“When they asked me if I would take it this year, of course I was happy to have the opportunity.”

Cech’s move means a departure is very unlikely, meaning speculation over the future of David Ospina may grow. Goalkeeper is an area of potential investment this summer, so maybe we’re targetting a young keeper with potential who can learn from the experience of the former Czech international.

Of course everything is up in the air with a new manager soon to be announced, so we’ll wait and see what happens.

Chelsea 4-1 Arsenal: By the numbers

Cech: The players didn’t deserve this

Might do better behind a better defence to be fair

No issue with it and surprised others have. Frankly, every goalkeeper has regressed at Arsenal for the last decade and gone on to improve elsewhere. New manager means new backroom staff and I’ve no doubt that will help Cech. I would have no issue with us doing a kind of Buffon/Woj situation where we bring in a young, high potential, keeper to compete with him.

Cech is a top keeper, just requires a decent defence in front of him.

Naah he is waaaay past his best but we definately do need defensive rebuilding and organising.

Won’t believe Ospina is going until I see it, he’s been said to be leaving every season sonce he arrived… Don’t rate cech as a no. 1 either but beggars can’t be choosers I suppose..

None of that matters anymore, as this season, it’s the IRS with the Emery front we’re dealing with. If it’s ends up being the same… well then it tells a lot about Wenger’s troubles.

Here’s hoping we get Butland from those thugs in Stoke and let him play some of the season whilst learning from Cech also. Could be our number 1 in a year

We already have 2 young goalkeepers who can learn from Cech or someone else – Macey & Iliev both have great potential and are 23 years old. We needed a new No.1 this summer, someone with experience and who could stick around for some time, but it looks like the best we will get is a back-up for Cech who will replace Ospina and knock our promising young goalkeepers further down the order. We may not even get a replacement for Ospina come to think of it. Szczesny was our No.1 at the age of 20 so I don’t buy… Read more »

Really awful news. I was hoping the Chelsea reject would fuck off over the summer. Not good enough.

I hope we do not waste good transfer money on a goalkeeper, and instead promote one of the academy giants Martinez or Macey as the backup to shadow Cech and be ready to get thrown into the fray when needed. Most of the standout keepers in the Premier League, save De Gea and Courtois, were nothing special before they earned their spot with quality performances — Heaton and Pope and Butland and Pickford and even our old Fabianski, all of whom were nothing too special before they were given their chance. Szczesny nearly worked out perfectly for us in this… Read more »

Martinez has hardly been given any chance, but when we needed him he was good. It would be interesting to see what he could do with some game time. I also think that Ospina would be a lot better with regular games, he should have taken over from Cech after that pass out to Cesc, which was one of many blunders he’d been making. Hopefully the new manager will be picking his team on merit and not favouritism or reputation.

I like Cech as a man, but worry his best keeping days are well behind him now. Dave could move on, Emi could return or we could move for Butland, Leno, Allisson possibly. I think it should be our priority before other CD and DM.