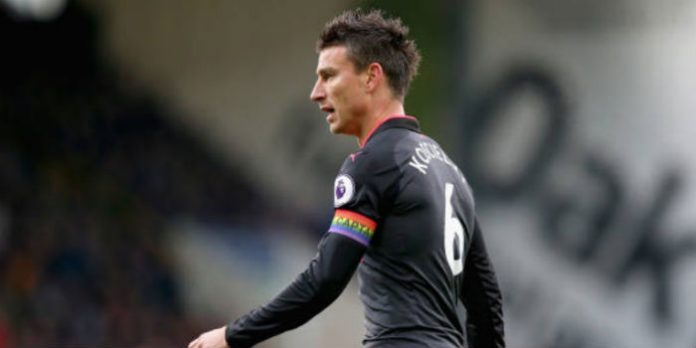 Earlier today, Arsene Wenger confirmed that Laurent Koscielny would miss the next six months having undergone surgery on a ruptured Achilles tendon.

It’s a serious injury for a player who has been plagued by tedinopathy for years now, and which robs him of his place for France at the World Cup this summer.

It also leaves his Arsenal future in some doubt, as a new manager will probably need to fill the gap with an experienced player, and where that leaves him in the pecking order when he is fit again remains to be seen.

However, in a statement on Twitter, the 32 year old declared the operation a success and outlined his determination to return.

Thank you for all the messages received since my injury. The operation went well, it is a new stage that begins for me. I am determined to fight, not only for me but also for my family, my friends and all the people who support me.

It’s a cruel injury for a player who has given a lot to the club since he joined in 2010, so let’s hope he can make it back and play a part again.

He’s always been a great fighter.

Just keep doing that Kos and you’ll be back and playing in no time.

Stay strong captain!!!
If anyone can fight for this. its you!!!

Kos is a class defender, he’s a joy to watch defend when he plays well. However, with these chronic problems and his age I fear he might not be back to his best ever again. Get well soon Lolo.

He needs to adapt his game; he still has a lot to offer this club.

Wishing you a speedy recovery, Lolo!

Keep going and stay determined. You are the best cd we have and we will need you in the future. Hope you retire with us.

Now that he’s had this surgery, will that mean he will no longer need daily treatment and injections? Any medical experts out here who can shed some light on what might happen?

Not medical expert at all, just rephrasing what Arsene said in a press conf: not usual that inflamed achiles tendon ruptures, but when it does, the good thing is that the operation heals the inflamation!

Not trying to be a jerk and I hope I’m wrong, but does anyone think his time with us is up? I mean we could barely rely on him as a starter this season and you could see he’s lost a bit of pace.

He’s been my favourite Arsenal defender since Toure so perhaps he could play a bit more as a squad player in years to come. Would he accept that and would a new coach want that?

I’m gutted he is missing the World Cup, France won’t be as strong without him.

Wear and tear. Taking nothing away from Koscielny but he may become a liability. We will do ourselves no favours to depend on him next season. Aside from Mustafi and Chambers, we have Holding and Mavropanos. I don’t see the efficacy of us taking on another 21 yr old defender from Stuttgart…its frankly the last think we need. But Mslintat does not buy for squad balance considerations so you never know. If anything, we need to think of the road ahead without Koscielny. If we find interest in market, we should sell Koscielny. If not we can retain him for… Read more »

You are deluded about Mustaphi, is he your cousin?

Makes way too many basic errors, he lumps the ball forward all the time to no one in particular. Dives in way too early unnecessarily.

He is young so hopefully he can rectify this issues.

Yes he blocks but it’s normally to cover his on cock ups.

Mavropanos already looks better than the rest. He should be at least in our top 3 choice for centre back next season. Mustafi is a liability and just makes too many mistakes and should be moved on in the summer.

He’ll be fit in time for Christmas. Back to take a part-time role in a well-shielded back three where he can boss it.