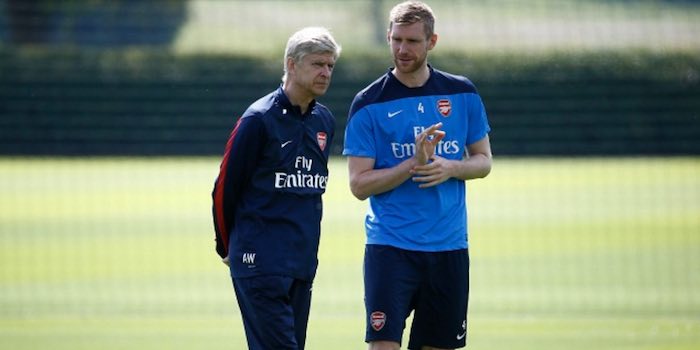 In a few days time, Per Mertesacker’s playing contract at Arsenal will end.

When he returns to Hale End, he’ll be heading up the club’s Academy – a huge responsibility for the 33-year-old given the Gunners’ dedication to chanelling youth prospects into the first team.

In short, there is talent waiting in the wings. But there are also issues awaiting Mertesacker, including an investigation into alleged bullying by coaches Steve Gatting and Carl Laraman. The pair is currently suspended.

So what is Per going to tackle his new role? He dropped a few hints in his new book ‘Weltmeister ohne Talent‘, where he explains:

“In my new role as Arsenal academy manager I will do everything I can to challenge the young players’ mindsets.

“I want to challenge them so that they are ready to take on new ideas and protect them from being injured, when it comes to their body and soul.”

Having spoken so candidly about the stress he suffered trying to cope with life at the top of the game, Mertesacker seems absolutely dedicated to protecting the mental health of teenagers, on whom the spotlight shines increasingly brightly.

“We should be careful that we do not judge people too early,” he says in an interview with deutschlandfunl.de.

“That was the case with me, I was judged early and judging early can be bad. In retrospect, I’ve always grappled with how you deal with the concept of talent. As you are confronted with it, you dissect it and find peace with it.

“Football has changed a lot over the last fifteen years. When I was a teenager, I was not approached by an agent at 13, I didn’t have a boot sponsorship deal, there was no social media, I could grow up a bit more sheltered, not thinking so much, ‘What does it mean now that I’m getting so much money, a boot sponsorship deal, am I something big?’ We need to take care of these issues.

“Most of the time, it’s not the kids who lose their heads – most of the time it’s the people around them: the parents, the agents, who really confuse them and really give the wrong values.

“That’s what we, as a club, of course, need to do. Where can one really convey values? If the first story is, how can we give the most money to whom, then it is very, very much destroyed.”

In his final season at Arsenal, Arsene Wenger conveyed his own worries about the influx of cash at youth level. According to Mertesacker, it’s a situation that is altering the family dynamic for the worse.

He explained: “London is a completely different place compared to Hannover. Many families are not doing well, they cannot support their families so well, they do not have a job with lots of money, which means that as soon their children are allowed to earn money at 16 or 17, more than their parents, it’s unhealthy. The parents then stop working and start thinking, ‘My child is taking care of me now.’ It should always be the other way round.”

“I want to convey values and also try to promote that money does not play the decisive role, especially for youngsters. We need to be able to control and support the development of these young people.

“Being authentic helps the young players, they should feel well cared for and well supported and not try to push things away and push things aside.

“I do not think anything is lost in the football business, I think with all the attention that comes to the young players, you should talk and understand more about it, the guys have to understand themselves first and their feelings, how they see themselves and how they deal with and overcome the pressures and that’s why it’s a great job for me to have such a positive impact on young people.”

Mertesacker’s interview with deutschlandfunk.de is well worth a read, although, you might, like us, need a hand from Google Translate if your German isn’t tip-top.

I’m wowed at every thing that comes out of his mouth really, in this particular interview. Especially the bit about family dynamics and money. Like an alternate version of spiderman’s aunt May, endless words of wisdom!

Great sentiments from our bfg.

Of course the problem comes when other clubs are tempting youngsters with shitloads of cash at ever earlier ages. Hard to think how you compete with that while maintaining proper values.

Because of our values Wenger let go Messi and Ronaldo. Sticking to your values is good but……

No, he didn’t. United offered 3 times the amount of money to Sporting, more than we could afford at the time, and Carlos Quiroz convinced him to sign. Barcelona saw what a talent Messi was and did everything in their power to keep him, rightfully so.

You can only let go of something yo have. Ronaldo was an untried 16 yearold who looked ok (show pony) but in no way could you tell that he would become the player he has become. Rooney was ahead of him as a prospect at the time and he was pretty average for the first 4 seasons at Utd. Barca had Messi sown up with his family over from Argentina and paying ufor his medication. You’d probably said that Wengers project youth is working if we had them at the time.

I bloody love that man!!

If I had a son who was a teenage football star, having read this I would want him to play under Per.

It’s nice to know that in this day and age, there are people who have made it to the top, who are still grounded.

“He’s a God around here”

The Arsenal Academy couldn’t be in safer hands…

I like mert, he is a top bloke who I hope one day will be arsenal manager

Per is gonna be such an important part of the transition to the post-Wenger era. Thoroughly decent man. Shining a light on the mental heath issues involved in work of any kind is a long overdue breath of fresh air.

Huge man for the club.

Compare if you will the introspective, reflective and thoroughly thoughtfull narrative of the BFG with, say, Chelsea’s captain and team mates’ wife shagger general…nah..John Terry is a cunt alright…

I really hope Per is a success in this role. He’s got such an inspiring vision and one which is very much against the tide. So its no easy job at all and if he gets through to a handfull then the man has done a fantastic job.

Now bring in Bergkamp to work with him, was loved by the youth at Ajax but hated by management.