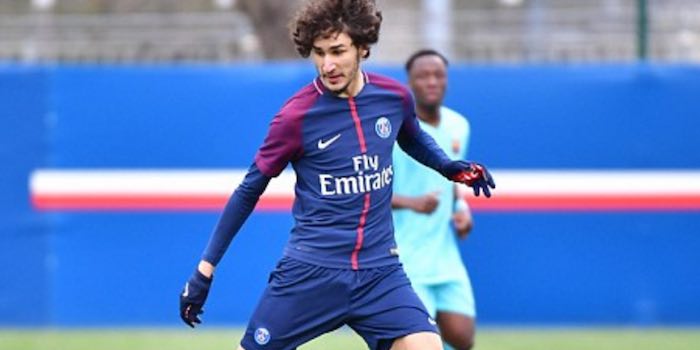 According to @ParisUnited6, a well regarded PSG focused account, Arsenal could sign one of the club’s most highly rated youngsters.

Yacine Adli is a 17 year old midfielder who, despite being offered a contract by the Ligue 1 side, is apparently unconvinced and could make his way to London instead.

They say a three year offer is on the table with another two year option should things go well.

He’s not somebody we know a great deal about, beyond the fact he’s an attacking midfield player, so if anyone who has seen more of him wants to educate us in the comments, please feel free.

With Unai Emery having to juggle Premier League and Europa League next season, the door may well be open to some young players to impress.

Meanwhile, from Germany, kicker report that the Sokratis Papastathopoulos deal is complete and could be announced by Arsenal before the end of the week.

How do we know what to think without the Poo-o-meter?

Poo-meter needs handbrake removal… everything is on the table

I just can’t wait for the EMERY KNOWS or EMERY IS SHIT or EMERY OUT banners after every week’s match.

Not so sure about this guy. What is his connection with Dortmund?

I’m not sure about this guy. But on the “what does your hair look like?” ad underneath I’m the guy on the far right in the second row. What does that say about me? Other then I’m bald…

* those ads are tailored due to your browsing habits.

If you improve your browsing habits you will get more interesting ads.

Mine for example have explosions and shit

Hope the explosion to shit ratio on your ads is better than 5:1

So you’re telling me there aren’t actually women in my area?

I love you bob hahaha

Humbug. Here I was fully convinced that after my emigration half way round the world that the ‘women in my area’ had simply packed their bags to follow me! Figured they were all to shy to say hello

I knew we were going to get our own Fellaini one day.

I know. I’m not quite sure what to make of all this. I’m used to spending this time of year curled up in the fetal position, crying, watching our rivals make moves and get better while we do nothing. We haven’t done anything major yet but we’re definitely improving, and it’s fantastic.

Last year we had made a 40-something million pound signing by now. We always sign a couple of interesting youngsters early as well. I don’t think this perception is particularly justified to be honest.

Nothing to be amazed about.

Oh this is gold ?

Isn’t that what the Belgians nicknamed actual fellaini?

Well, chaps, I’ve just sullied myself by reading the Mirror’s analysis of this kid, and have learned that he is tall and can, and I quote, ’round defenders like cones’. Here at Arsenal we don’t take the disparagement of cones lightly, but perhaps that was just the Mirror needing a simile to pad what was a frankly embarrassing attempt to convey evidence of actual knowledge of the player.

According to Metro he ‘plays like Adrien Rabiot’. I think their research has only extended as far as Google images tbh.

A Different George
Reply to  Jalex

When I first saw an article about a player following Emery from PSG to Arsenal and saw the photo, I thought: Rabiot! We’re getting Rabiot! Then I started worrying about Rabiot’s reaction to not being selected for France, and maybe his attitude was not great and how would he fit in the changing room. Then I thought, but Emery knows him, so he must think it will not be disruptive. Then I wondered whether he could play alongside Xhaka or would he really be in the way of using Ramsey as the key. It’s so great not to have to… Read more »

youtu.be/Rx1YG781C9c This youtube video says he’s a winger, but in reality, looks more like Adrien Rabiot’s right-footed younger brother. In other words, looks quite good. My only concern would be: in Nwakali, Willock, and the Jeff (and even Zelalem), don’t we already have several of this sort of promising, young, tall, elegant-on-the-ball, box-to-box player?? Don’t get me wrong, I don’t expect them all to make it at the top level, so the more the merrier. I just would hate to use up valuable resources filling the squad with a bunch of young players most of whom will never be regulars… Read more »

Nice link.
Looks like a more coordinated version of Zelalem.
The question is: can he do it on a cold windy night at Stoke?
The answer now is: who gives a crap since those Stoke A-holes were relegated.

One of these days this joke is going to lose its charm.

Today is not that day.

I like the fact he’s very tricksy and seems confident on the ball. Excited!

Unfortunately in this case his football age is 23. Sounds like Rosicky got lucky – it works backward on some people.

Well so far our new management structure has proven adept at identifying talent they’ve already identified and older players on frees. Let’s hope their bags of tricks have a few more!

The last 17 year old we got from PSG was Nicolas Anelka and he wasn’t too bad. Well to start with…

He was the anakin skywalker to wengers Ben kenobi.

You’re saying he’ll go to Bolton at some stage?

No that was Jabba The Hutt – AKA Sam Allardyce

Thought that was rabiot for a second then..

Spare a thought for oz and mkhi tho..stuffed to the wings or sayonara?

Well,reason behind my theory-he apparently joined us cause we promised him immediate first team chance.and as he plays in the CAM role and we have a deep playmaker in xhaka,his position will be in the 10 role.hence said what i said.jeez :/

Yup, the fact that we assured this 17 year old he would get first team chances means there’s no place for Ozil and Mhkitaryan. Good analysis.

You know, more than transfers, I’m more eagerly enjoying the coaching staff change. I’ve always felt like we have a brilliant squad, just poor coaching and management.
Of course we do need few signings as well as little tweaks

If he’s bought, then Iwobi might struggle to get playing times.

Some more competition for him to get on the team sheet and options when form is thin would be a good thing in my opinion.

Doubt it. Iwobi is far ahead. Same sort of nonsense spouted about Nketiah whom when he has come on more recently has been ineffective. Same thing with the Jeff etc. People get easily ennamoured by these young potentials like Mavropanos and Holding which is part of our downfall. All in good time. Iwobi meanwhile a far better player than many imagine. Frankly he needs to be played in deeper midfield. End of season when Wenger finally played him there, he had more time to look up and pick passes plus he leveraged his strength and technical ability well to keep… Read more »

I.ve been hearing about this guy for a while. He is neant to be the real deal. Lots of big clubs have been looking at him apparently

The real deal you say?

Now this is more like it!! Good signing. With the europa league, I expect to see him playing with the first team in 6 months if he isn’t merely using us to get a bigger contract at PSG.
He was linked to Barca sometime around Jan. Astute signing if true

Hopefully the deal gets done, the boy looks like the real deal.

So did the Jeff etc.

Yeah, and then he’s had injury problems. Still looks fantastic when he plays. Is your point that this player could possibly get injured? So we should just never sign anyone, then, right?

I swear I’ve never seen you comment anything other than contrariness for its own sake.