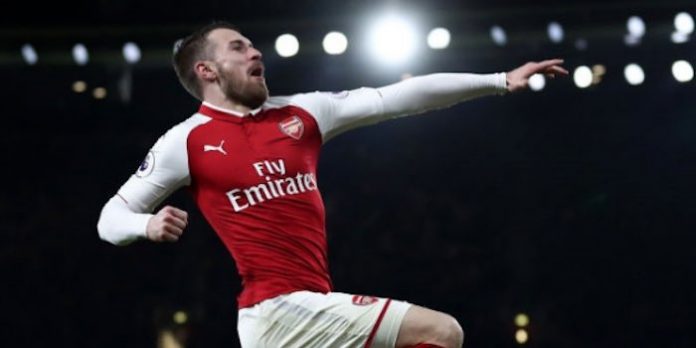 Arsenal have confirmed that Aaron Ramsey has been crowned Player of the Season for 2017/18.

The Welshman scored 11 goals and made 12 assists in 32 appearances; an impressive return in a team that stuttered to sixth place in the Premier League and finished trophyless. Nacho Monreal and Mesut Ozil came second and third in the fan poll respectively.

The midfielder, who will be out of contract at the Emirates in a year’s time, was previously crowned Player of the Season in 2014.

The delightful flicked volley, scored with the outside of his right foot after a fine pass by Mesut Ozil, beat Olivier Giroud’s acrobatic strike against Red Star Belgrade and Ozil’s volley against Newcastle.

Well done to Aaron. Here’s hoping the new manager can persuade the Welsh Jesus to sign a new deal…rhino clauses at the ready!

His agent is seeing nothing but $$$ at this news!

I’m sure he’s proud to be named our best player in our worst season in 22 years!

Says a lot about his character and ability that he was able to shine despite such difficult circumstances around the club.

Woah you might wanna work on that…whatever that was?

Some will say Arseblog rigged it for him…

Wow, I was pretty sure it would be Shkodran.

As for goal of the season, he has to count his lucky stars Welbeck scored with his sheen, back, shoulders.

If he had smashed one in with his nut then there would be no contest.

Gotta love a good goal off the sheen

Well done to him.

It has to be said though that for all those impressive attacking stats, he was a bit of a problem in the first half of the season defensively.

Absolutely disagreed. I feel that Ramsey has kept on playing exactly the same throughout the season, but it has been Xhaka who has changed two big things about his game in the second part of the season. Firstly, when the opposition is on a fast counter, Xhaka doesn’t commit to tackles as much and instead, holds his position, falls back towards our goal, and keeps the space occupied, which blocks the opposition from breaking quickly. For example the Stoke goal in the beginning of the season, which I’m sure many would say is Ramsey’s fault, but I feel it’s much… Read more »

Still not convinced by his quality tbh! He is sloppy and inconsistent, sad that whole team is hall mark of such sloppiness and inconsistency. I would be more than happy if he is sold. He gives a feeling in every game that after 70 mins he is DONE!

One thing that can’t be held against Ramsey is his energy. When he isn’t injured he can bomb up & down the field for the full 90.

Another guy who insists on letting facts interfere with the narrative. (By the way, according to WhoScored, Mustafi was the highest-rated centre- half in the Prem this season.)

Barry
Reply to  A Different George

Wow, you weren’t convincing at first.
But then you said “DONE” in capital letters and that convinced. Only someone with authority would do such a thing.

Congrats to Ramsey. I thought it was going to be Nacho but he is a defender and the hype isn’t there. Hope next season, we have a player of the season with similar statistics as Moh Salah.

My money’s on Auba

A Different George
Reply to  DJ

If he remains fit, I don’t see any reason that Aubameyang won’t score 30 in the league. As a goal scorer, he looks to be just about in the Aguero category (I will say Aguero and Salah, if Salah does it again).

Hantal
Reply to  A Different George

30 from obi, 20-25 from Laca, 5-10 a Piece from ozil, Rambo and Micky. That’s Early Wenger title winning form. It really depends how the defence can tighten up

What about nachos goals

Yes, now we have jedi masters pitching in with 30 goals.

In Arse We Trust

Give him rhinos and make him captain, Mikiiiiiii!!!

I have a nagging feeling that it will be one A. Wenger who extracts the Welsh Jesus out of Arsenal to play for him in a different league.

Barca or Juve for rambo? I would prefer he goes abroad.not that it matters,he is shit and inconsistent according to arsenal fans(the majority until about 6 month ago) So they shouldn’t even blink if he goes to join even spurs.Not expecting any downvotes on this unless most here change color quicker than chameleons.

As it is Arsenal fans who voted him player of the season there must have been a dramatic change of mind.

He is holding off signing his new contract because it designates him as keeper of the squads “trendy” beard since we moved on Giroud. Serious note, gorgeous goal. Rambo had a better than an average personal season in a poor team season. He is energetic, creative, and a more than willing runner. But he also has all the hallmarks of a Wenger player, overcomplicates simple play, dallies on the ball, and rarely shoots from outside the box (if the stats are different correct me, please). Is he worth keeping? Absolutely, it would be difficult to find a finished player of… Read more »

He plays the role behind the striker well. We now have 3 mids who are adept at that position in Ozil, Ramsey and Mhkitaryan somewhat overkill. However the flex system Wenger envisaged playing particularly anticipating us setting up stall breaking down teams sitting deep lends itself well to the versatility of these players switching across the line with each other. The problem is when we have to play against teams who organise very quickly and need to counter quick, we don’t have the sort of wide player who can take on or use pace to transition our attack quicker. Instead… Read more »

Get that contract signed! I would much, much rather keep him than Wilshere. Ramsey brings so much more to the team.

Nowhere near the moat talented in the squad but one of the most important and effective players we have.