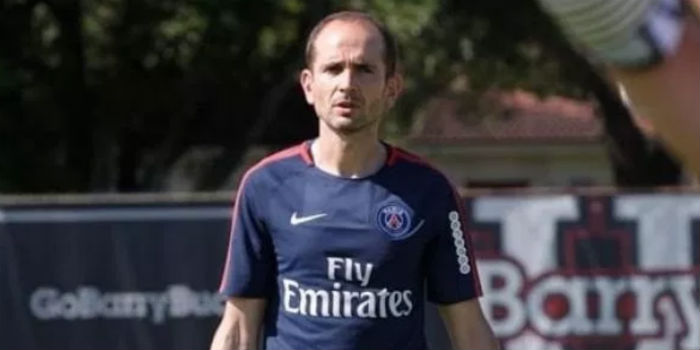 According to RMC in France, Arsenal have agreed a deal with Paris Saint Germain to sign goalkeeper coach Javi Garcia.

The Spaniard, who worked with new head coach Unai Emery at the Parc des Princes for a season and at Sevilla, will move to London Colney in the coming weeks to replace the outgoing Gerry Peyton.

According to Get French Football News, the appointment, “represents a big loss for Les Parisiens, with Garcia having been very highly rated by the capital club.”

Last week, the BBC’s David Ornstein told Arseblog that Emery is expected to bring in a few more new faces to fill his coaching set-up in the coming weeks.

Ozil: I don’t want to leave, so that’s it

PSG the latest club to be linked with Guendouzi

Lord_Of_Highbury
Reply to  Ya gooner

Maybe start by teaching Cech how to save penalties…he’s only ever saved ONE penalty since he’s been at Arsenal, and we tend to concede a lot of those!

He can also make Ospina taller. Or at least tell him on which side of the line to stand 😀
Still it is a known issue we’ve had for a while, let’s hope it’s for the better.

What a great save that was though

Arsenal should really take a look at Dean Henderson of Man utd, but recently on loan at Shrewsbury. Fantastic young keeper and made some brilliant saves in Play off final. Looks better than Cech and Ospina and looking for a new club for next season.

David C
Reply to  Ya gooner

I’d rather take Allison off Roma, not sure we can afford him though. He’s currently keeping Ederson on the bench for Brazil.

I’d rather take Szczesny off Juventus.

Great! Not too sure about Sergio Rico as reports suggested, but it can be that bad, right?

Yeah he’s been crap whenever I’ve watched him. I’m hoping it’s just the press looking at Emery’s former GKs and doing 2 + 2, not understanding how our recruitment works these days

never thought he was a great gk . good but the one we should be going for

Cech had a bad season for sure. But he was playing behind an awful defense too. He hasn’t turned into a terrible keeper yet. How old was van der sar when he was winning titles?

Cech over Ospina any day of the week. Cech at least has adult-length arms.

Pétr Cech may not be the best for Arsenal at his age but thank Bergkamp it could be worse – we could have Loris Karius as our number one.

Or Minolet as our backup.

Hopefully we do buy a keeper but worth remember Cech is not the first to regress under Gerry Peyton. We’ve had more than a few keepers leave his tutelage and go on to improve elsewhere so don’t be be surprised if Cech does regain some form next season.

We can’t take the chance that Cech may not improve under this guy next season. Goalkeeping position must improve all around with new coaching and better talent.

I really do wonder how Gerry Peyton kept his job for so long when every keeper he coached became worse. It is truly amazing, how he got away with it for so long.

Hope he remains even after a change of manager. He really helped Areola become such a good goalkeeper.

He has been good, no doubt talented, but from what I hear he is a bit of a tit.

The important thing is it’s not Gerry Peyton. Now I can breathe again.

Can he make Ospina grow a neck and tall arms tho?

That would be a freakish-looking keeper.

I’ve heard he can fix Almunia

We can’t risk going into next season with Cech for a final year. Not only makes costly mistakes but he’s starting to pick up injuries as well. I’m hoping that the refreshing of the coaching staff may possibly see an improvement in the goalkeeping staff. Is it just me, or does anybody else feel we should be knocking on Stoke’s door for Butland?

I fully expected Emery to bring in all his own coaching staff as they’ve all been with him for years. Can’t help but feel a little disappointed though, as part of me was really hoping that it would be Lehmann.

Lehman said he doesn’t want to be a GK Coach. It’s his absolute worst dream.

I just can’t wait for the season to start….
I really want to see how we fare against those money bags

lets hope emery does away with zone marking aswell

It’s just that typical thing where you often can’t blame any particular individual when a goal is scored against zonal marking, so the pundits end up criticising the system itself. Which is fair to some extent, it’s not infallible no matter how well it’s executed, but I don’t think teams who utilise it concede any more than those that don’t (can’t seem to find any stats though).

Areola has developed into a great keeper in the last few years, particularly last season under Emery. Wouldn’t mind his arrival as well!

Now he can buy one of young French goalkeepers either Lecomte or Lafont.

If Ospina does not become an issue, I say keep him for now. The ones to work with are our younger keepers in Martinez and Macey. Unless there is a good keeper on offer, no reason to bother trying to plug another position with 3 more crucial areas to sort out in Cback, CM and winger. As is, (if media reports are to be believe and they rarely are), we are cutting corners with the likes of Lichsteiner (in another position we should not worry about) or Sayoncu (another inexperienced 21yr old when we already have Holding and Mavropanos) and… Read more »

But he has 50 millions. Do you buy a luxurious sport car with less than average wages? You can buy an old one that is not too wrecked and hope you can drive it for a couple of years. I think that is the case with Lichtsteiner.

Just realised thumbs are back. Yay

I reckon Gervinho would make an excellent penalty saver – he himself would have no idea which way he was gonna go, so he wouldn’t be vulnerable to any strikers trying to psyche him out.

All this talk about buying a new keeper, personally I would keep an eye on Emiliano Martinez.

ON loan at Getafe, they conceded (next to maybe Athletico) one of the lowest number of goals this season.

On that note, we should also consider maybe Bruno who used to play Cback for Sevilla under Emery.

Over at Valencia, they have also been comparatively miserly with goals conceded. Guess who is playing there? Gabriel.

But has he not played only a handful of those games?

In my opinion long long overdue. But good luck to Peyton whereever he goes next.

Grenada ?? is a Caribbean nation ?