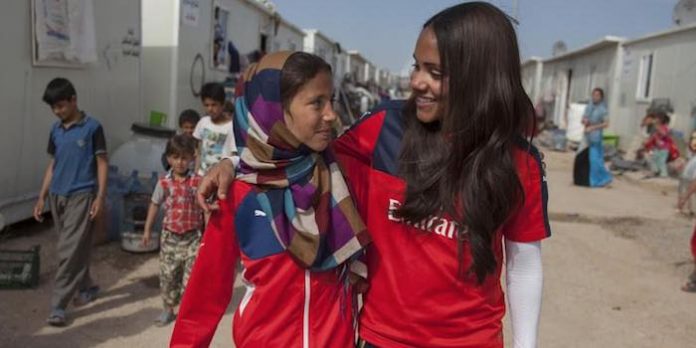 Arsenal captain Alex Scott said her goodbyes this Saturday, after an extraordinary career with Arsenal Women. Alex has won 6 league titles, 7 FA Cups, 5 league cups and she scored the winning goal in the 2007 Women’s Champions League Final for the club. (That’s not to mention her 140 England caps).

Alex joined the club at the age of 8. “Arsenal is pure class, this club means the world to me,” she told Tim Stillman immediately after her farewell match at Meadow Park, a 2-1 win over Manchester City this weekend.

Shortly before kickoff at Meadow Park on Saturday lunchtime, the Arsenal and Manchester City teams arrive onto the pitch a little earlier than usual and form a guard of honour. Arsenal manager Joe Montemurro and City captain and ex-Gunner Steph Houghton clutch red and white bouquets. A tearful Alex Scott gratefully accepts them, as both teams and all four sides of the ground rise in unison to applaud her.

We walk out to a special guard of honour to congratulate @AlexScott on her incredible career. #CaptainScott pic.twitter.com/q0coPy8koG

With seven FA Cups, six league titles, five league cups and a Champions League (she scored the winner in the final) winners medal in her back pocket, Alex Scott takes a lot of memories away from her time at Arsenal Women. Yet life at Arsenal began far more humbly than this for the Arsenal captain and 140 cap England international

“I was spotted by Arsenal playing cage football in Tower Hamlets when I was 7,” she explains. “Someone who saw me knew someone at Arsenal and knew that they had an academy, which I had no clue about! But that wasn’t a driver for me, I just wanted to play football in my neighbourhood. But Vic Akers got in touch with me, he asked me to come down to train with Arsenal and that was that.”

#tbt from those early @ArsenalWFC years all the way up untill my last 2018!! It's nearly time ?⚽️

Alex formed part of the 2006-07 quadruple side that did not lose a game in any of the four competitions they played in. Scott even scored the winning goal in the Champions League Final (“wind assisted!” she jokes), as the Gunners beat Swedish side Umea 1-0 on aggregate. Scott insists that playing in such a dominant side was crucial for her footballing education.

“When you look at the players in that team, Katie Chapman, who’s also retiring this year, Rachel Yankey, Faye White, Kelly Smith….,” she trails off with a smile, “The names are endless. I could reel them off all day. Being a part of that team taught me so much in the early part of my career. The work ethic, the determination, the Arsenal values they passed onto me. It was a pure joy to be involved.”

In 2009, Alex decided that she needed a new challenge. As most top players did back then, she moved to the United States, where standards of professionalism were higher than in England. Scott spent two years at Boston Breakers. Scott admits that, given the professionalisation of the game in the UK in recent years, such a move might not be such a straightforward choice in 2018.

“I don’t think it would be,” she reflects. “At the time, we all had to go over to the US. I didn’t just want to be the best right-back in England, I wanted to be the best right-back in the world. I think if I had stayed at Arsenal in that period I wouldn’t have been able to strive for that goal, I needed that new challenge and back then, you had to go to America to be a professional, to have the ball at your feet every day.

Alex says that the WSL is a good enough draw to make the choice less clear-cut in a modern context, but believes that moving to the states helped her to grow as a person. “Now it’s slightly different, you have professionalism here. Players have the foundations and the facilities and, crucially, they have the top players around them to help them grow. But it was a great experience for me to go somewhere new.”

Alex is retiring to focus on her burgeoning media career. A regular face on Soccer AM, BBC Final Score and even Sky Sports Super Sunday, Alex has become as omnipresent on our screens with a microphone as she has with a football. This isn’t a career path that has fallen into Scott’s lap, it is an opportunity she has plotted and worked for for some time.

“Since I came back from America I was clear that I wanted to be in the media. When I was in the US, I was blogging and writing and doing things on YouTube. I always loved being interviewed. So when I came back in 2012, I was already thinking about life after football. I took a degree and it carried on, I did some fun stuff with the FA, interviewing players on international duty and I realised that was the path I wanted to go down.”

At the Burnley match last Sunday, during Arsene Wenger’s emotional farewell, Scott was presented with a silver cannon on the pitch, earning the same treatment as Vic Akers and Per Mertesacker. Alex was greeted with two chants by the 60,000 crowd- first, a burst of “Alex Scott, she’s one of our own,” before the North Bank broke into a chorus of “Tottenham Hotspur, she’s won more than you!”

I ask Alex about her emotions both on that day at the Emirates and at Meadow Park, as both teams give her a guard of honour. Her voice breaks slightly as she tells me, “This club means the world to me,” she takes a second to compose herself and swallow back the lump in her throat, “I think it just shows Arsenal’s pure class to respect my career in that way. To walk out on that pitch on what was Arsene’s day and Per’s day, to be able to share the stage with them just shows the class of Arsenal Football Club. We have always set standards the whole time I have been here and we continue to do that.”

I just want to say a MASSIVE THANK YOU to all the @Arsenal fans for what was truly an amazing/unforgettable reception yesterday!!

‘She one of our own, nearly had me in tears, then the other chant had me laughing again ?.

Per and Arsene were not the only significant figures that Alex shared a stage with at Emirates Stadium, the retirement of Vic Akers, founder and groundbreaking manager of the women’s team, is honoured in the same way. Vic brought Scott to Arsenal and she again becomes emotional when considering his impact on her career.

Her voice breaks again, “Vic was always that second father figure to me. It’s so fitting that we’re ending our Arsenal careers together, in the club’s 30th anniversary season. Vic was the one pushing me and driving me to always want to be the best and setting standards for Arsenal Football Club.” Alex is quick to consider Akers’ wider influence too.

Arsenal Women is an absurdly decorated football club, to stand out as a legend takes some doing. On and off the pitch, Alex retires as one of Arsenal Women’s most recognised and celebrated ambassadors. The phrase that trips from her tongue time and again during the interview, “setting standards” is very revealing. This is a woman who spent her career raising the bar. (Fortunately, her shot dipped just below the bar in that 2007 Champions League Final).

Alex Scott, she’s one of our own. Now and always.

Also, after reading the article, I feel Arsenal is such a close-knit family. Alex is right – having her share the stage with Arsene, Per, and Vic showed me that we’re all part of one thing only – making Arsenal better.

One of my longest dreams is to have a season where every team at Arsenal (men’s, women’s, U-21s, U-18s) win the championship in one season. That would really be amazing.

And great piece Tim, love the increased coverage of the women’s team here at Arseblog. As a foreign fan it’s really hard to follow their games, so this is much appreciated

Vic Akers is an OG.

Alex Scott is and I think will be my favourite female arsenal player of all time.
An end of so many era’s…

On the topic of “raising the bar”, I’d like to congratulate Alex Scott, the Arsenal and Arseblog for putting women’s football firmly in focus. In a world with leaders that wanna “grab her in the pu$$y”, it’s good to know that their are aspirational figures, institutions, communities and platforms willing to break archaic patriarchal structures down. Well done Tim and Arseblog for being part of this! I’ve really enjoyed the increased/improved coverage of the Arsenal Women.

I’m really glad the numpties who like to come and comment that they don’t care have pissed off now because Blogs tells them to do one.

She is a real champ. A great role model and such an humble and yet strong personality on and off the pitch. Thank you Alex, and best of luck for your new career.

Baeutifull lady and the best women’s rb Club legend up there with Kelly Smith.

Thanks for everything Scotty!
And thanks to Tim for another great read. Always good, always good 🙂

Lovely article about an outstanding footballer and human being.

All the best for the future, Alex. You are a trailblazer and groundbreaker.